53,000 disability grants have lapsed in the Western Cape 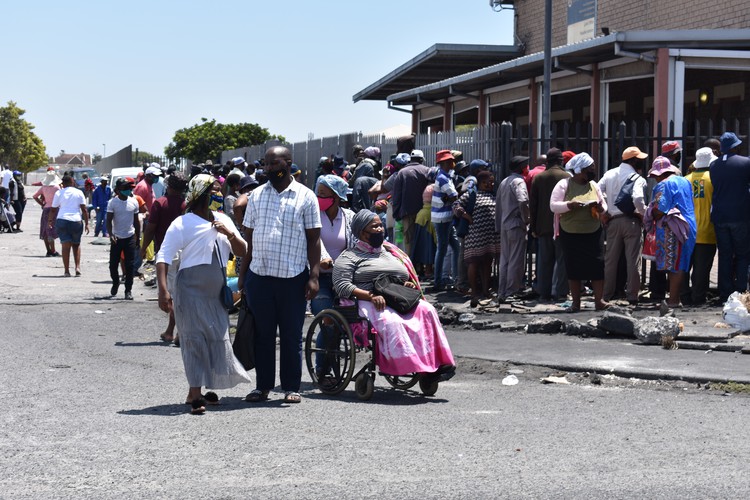 Hundreds of people are queueing outside the gates of the SASSA office in Gugulethu, Cape Town trying to renew their lapsed disability grants on Tuesday. Photo: Buziwe Nocuze

Philippi resident Ntombethemba Apile is preparing to spend her second night sleeping outside the SASSA office in Gugulethu, Cape Town in a bid to have her disability grant renewed.

The 45-year-old from Philippi was among hundreds of beneficiaries who have been camped outside the office in order to be assisted by staff. Like several people GroundUp spoke to on Tuesday, Apile said she had arrived early on Monday to find people already standing in long queues who had been there since Sunday night.

Apile suffers from severe epilepsy. She fears having to spend another night with the large group where very little social distancing is being maintained.

“I wish our government could see this. Is there nothing they can do to prevent us from coming here while the second wave of Covid-19 is killing people every day?” she asked.

Amanda Msuthwana, 55, said she had come to the offices to enquire about her children’s grants which were not paid in December. She had borrowed R200 to hire transport to arrive there after 3am “hoping to be first in the line” but had found scores of people sleeping at the gates.

“By the time we get our money, we will only be able to pay back the debts we are making now to come here,” she said.

Spokesperson for SASSA Western Cape, Shivan Wahab, said 53,000 disability grants had lapsed this month. She explained that the grants which had initially lapsed in February before the lockdown had been extended on a temporary basis until December.

Wahab said the total cost of extending the grants last year was in excess of R1.5 billion.

“A permanent disability grant is awarded for medical conditions which impact negatively on the applicant’s ability to work for a period longer than a year. Temporary grants are given for a period of six to 12 months and renewed if needed once this lapses,” she said.

Wahab said volunteers were being sent out to assist with queue management at all contact points and to help set up appointments. “Applications who are in undue hardship and who are not receiving any other form of income will be provided with Social Relief of Distress in the interim.”

She said that if SASSA had continued with these payments until the end of the financial year, it would have cost an additional R1.2 billion.

Wahab said that the second wave of the pandemic presented a new set of challenges with SASSA contact points open Monday to Friday with limited staff and strict compliance to Covid-19 hygiene protocol.