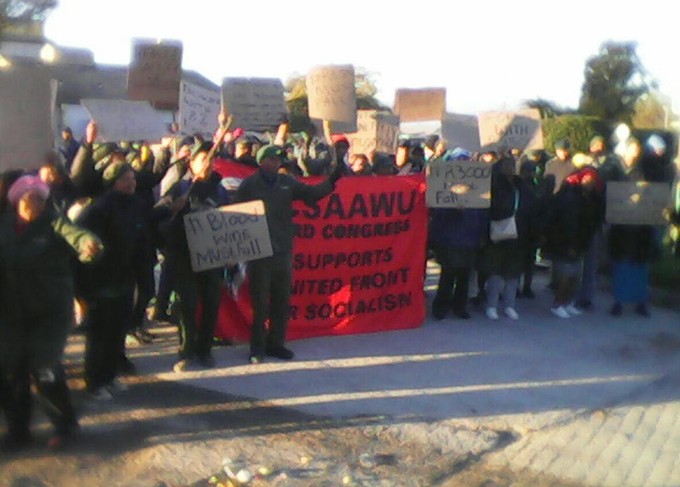 Workers at Robertson Winery went on strike today, calling on the winery to pay them R8,500 a month.

The workers, who protested outside the winery this morning, say they are currently earning between R2,900 and R3,500 a month before deductions, according to Karel Swart, deputy general secretary of the Commercial, Stevedoring and Allied Workers’ Union (CSAAWU).

The winery is offering an 8% increase.

Swart said that more than 200 workers had protested outside the winery this morning after wage negotiations had deadlocked.

“Workers demand a living wage,” he said, “We must move away from percentage increases. It is not good. Workers are earning a slavery wage.”

Swart said this was the first time in the history of the company that workers had embarked on strike action. He said the union also wanted a committee to be set up so that they could jointly monitor the conditions both of workers at the winery and of the farmworkers who pick the grapes that supply the winery.

CSAAWU is also currently campaigning to make exporters of Robertson wines aware of the working and living situations of the workers at the winery.

Deneco Dube, regional organiser for CSAAWU, said that the protest was peaceful this morning but police and private security were present, monitoring the situation.

The union has set up an online campaign urging supporters to call on Robertson Winery to take action.

In a statement on the dispute, the CEO of the winery, Anton Cilliers said its labour practices were measured by the “principles enshrined by the International Labour Organisation”.

“The allegation that Robertson Winery has denied its employees basic rights and has refused to recognise CSAAWU as the representative trade union, is simply incorrect. CSAAWU is presently fully recognised by Robertson Winery for purposes of collective bargaining and the union has additionally been granted full organisational rights within the company. The parties have engaged on various occasions in an attempt to establish a Recognition Agreement, and Robertson Winery remains committed to achieving this.”

“For its part, CSAAWU has made a final demand for a 57% average wage increase,” said Cilliers.

This article was updated with a correction to the spelling of Karel Swart’s name.