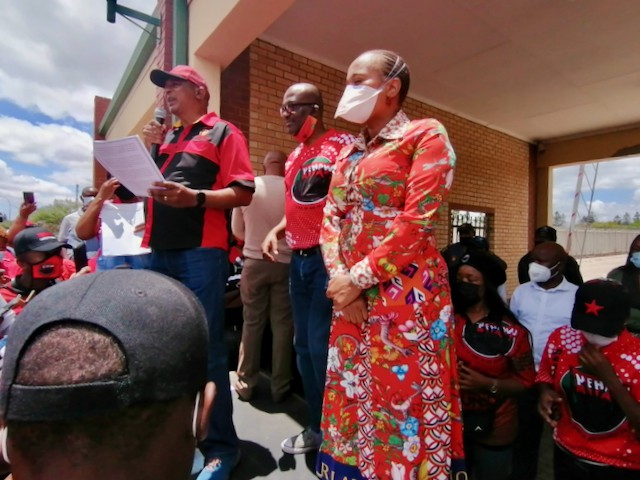 Limpopo MEC for Health Dr Phophi Ramathuba listens to demands read out by NEHAWU’s Jacob Adams after the union held a march on Wednesday as part of a provincial day of action. Photo: Bernard Chiguvare

It was not the first time NEHAWU has demanded the dismissal of Ramathuba.

In a “provincial day of action” on Wednesday, NEHAWU supporters marched from Hospital Park, singing, dancing, and waving flags and placards, first to the offices of the Limpopo Department of Health and then the office of the provincial premier in Polokwane.

NEHAWU is demanding “restructuring of the bloated executive management structure at the [provincial] head office”.

Ramathuba agrees. “I am the first person to complain about the people the union is complaining about. Some of these people are just warm bodies occupying our offices and I don’t really need them,” she told the media.

“We inherited the department that was suffering financially. The department is trying to correct the inheritance it received,” said Ramathuba.

She urged the union to work together with the department to improve things. But union members booed her and the premier when they tried to address the marchers.

Looking discouraged, Premier Stanley Mathabatha managed to say, “We will respond to the demands”, as he walked away.

The marchers delivered two memorandums each with a string of demands which the MEC and the premier received and signed.

Among the demands, NEHAWU wants Dr Thokozani Mhlongo, head of the Limpopo Department of Health, and Dr Muthei Dombo, deputy director general, removed from office. It wants community health workers permanently employed; an end to outsourcing pharmacies and medical depots; and payment of R43 million in performance bonuses for the 2020/21 financial year.

Also at issue is “pay progression”, in which employees receive an increase based on performance ratings. NEHAWU says that since 2012, those who should have received increments did not get them and it must be paid.

Last month six union shop stewards in the province were dismissed for refusing to enter into places that were not fumigated after cases of Covid-19 were detected. The union is demanding their reinstatement.