SASSA says her old age grant will be paid in February 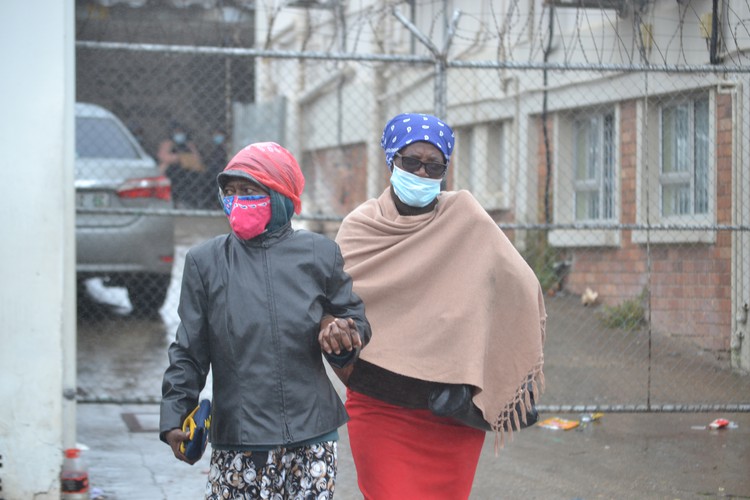 Thozama Bitterhout (Right) from KwaNobuhle accompanied by her relative Nomzi Gaba outside SASSA in Uitenhage while it drizzled on Wednesday morning. Bitterhout was there to ask about her pension that was not paid this month. Photo: Thamsanqa Mbovane

A blind pensioner was turned away at a SASSA office in Uitenhage on Wednesday morning despite her plea for assistance after her grant was not paid this month.

Thozama Bitterhout from KwaNobuhle was accompanied by her relative, Nomzi Gaba to the SASSA office in the drizzling rain.

Bitterhout said she received no explanation for why her old age grant of R1,900 was not paid this month. She used to get a disability grant until she turned 60 two years ago.

“When I arrived at SASSA at about 9am, the gates were closed. I heard a security guard saying they take in 50 people a day. I told the security to call the manager but he refused to do so. Instead, he took my ID book inside and came back saying I will only get my old age grant next month,” she said.

Bitterhout said a return trip by taxi to the SASSA office cost R24 per person, and she had to borrow R50 to travel with Gaba.

Gaba said: “We are tired and hungry. The queue was long, starting in Constitution Road and snaking to Chase Street.”

SASSA spokesperson in the Eastern Cape, Luzuko Qina, said the spike of Covid-19 and a move to level 3 lockdown had impacted already burdened services. Qina said that the incident with Bitterhout was “regrettable” but said her grant would be paid.

He said the issue had arisen when Bitterhout applied for a Grant in Aid in December which had also been approved.

“When any changes are effected in a bank account like additional grants, it is required that the account be verified by the banks first. This resulted in the payment delay in January which had to be rolled over to February. The bank verification has been completed and the beneficiary will be receiving both payments in February.”

Qina said 11,000 temporary disability grants had lapsed in the Eastern Cape. “We have booked in 90% of our cases, with 65% already assessed medically. We have no backlog,” he said.

Next:  Record number of South Africans died in first week of 2021