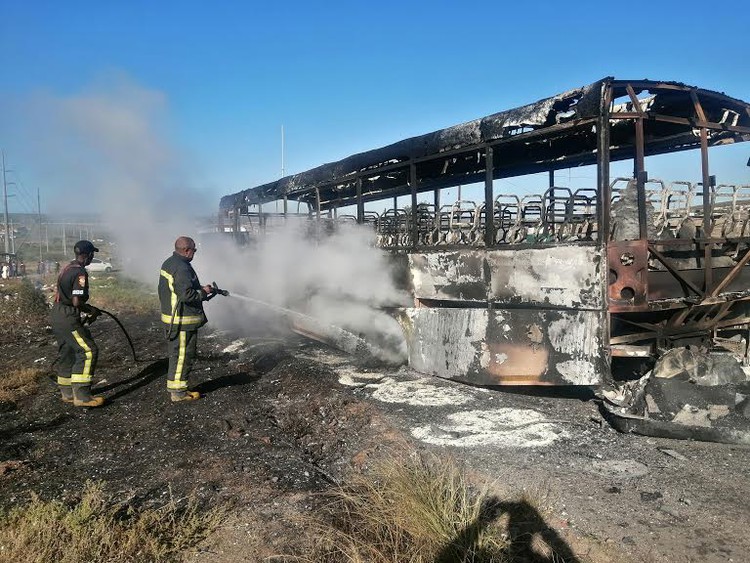 Two busses and three cars were torched on Monday by protesters demanding the electrification of their shacks. Photo: Mkhuseli Sizani

Five vehicles were torched on Monday morning during a protest in Westville informal settlement in Port Elizabeth. Protesters said Nelson Mandela Bay Municipality mayoral committee member for Electricity and Energy Luxolo Namatte had failed to keep a promise to connect the remaining 250 shacks to electricity.

After a decade these 1,250 households had been using izinyoka (illegal) connections that have claimed many lives. The residents were elated when Namatte switched on electricity to 1,000 households. But the others are still waiting.

As early as 4am about 400 residents protested between Mission and Uitenhage roads. A Toyota Quantum and a bakkie were torched in Old Uitenhage Road and two Algoa Bus Company busses and a car were set alight in Mission Road opposite the informal settlement’s main entrance.

Public Order Police dispersed the crowd with rubber bullets and stun grenades. But the residents came back again at about 8am and protested while a fire engine was extinguishing the bus fire. Police fired rubber bullets again and dispersed the residents who sang that their cries should be heard because they have lost many people due to izinyoka (illegal connections).

Captain Andre Beetge said, “At 5:30am, two Algoa Bus Company passenger busses were burnt out totally by an unknown group of attackers. According to the two bus drivers, they were still alone in their busses and on their way to collect passengers when the incidents happened. Allegedly an unknown number of persons blocked the busses in the street and demanded the drivers get off the busses. The busses were then set on fire by the attackers and the drivers were allowed to run away.”

“As soon as the busses were burning, the attackers also fled the scene, leaving police to only find the two burning busses.”

Sipho Ntsondwa, chairperson of the Informal Settlements Forum, said, “Residents are frustrated because Namatte had promised them that in the first two weeks of this month the electrification of the 250 shacks would start and be finished by end of the month. But we have not seen any contractors and material on site.”

“Our protest was peaceful and we were about 400. We were only carrying placards trying to get the attention of the municipal officials. But the police arrived and shot at us without asking any questions. Then the protest turned violent because we were provoked. Four of us were injured.”

Nokhaya Tsho said, “I arrived here in 2002 but people who arrived after me already have electricity. My husband Mnyamezeli was electrocuted in 2013 by an izinyoka on his way to work. Since then life has been difficult for me and my four kids. I am unemployed and paraffin is too expensive. For izinyoka we pay R150 a month and child support grant money is not enough to do that. I have to collect wood and cook outside for my children. But that is dangerous because our shacks are old and can easily catch fire. The police are just shooting us for fighting for our rights.”

Municipal spokesperson Mthubanzi Mniki confirmed that 250 shacks had not been connected to electricity. He said this was because materials such as boards and service distribution boxes were not available from suppliers.

Next:  Constitutional Court outlaws bigotry from beyond the grave