Green Scorpions finds City is not compliant with all its instructions 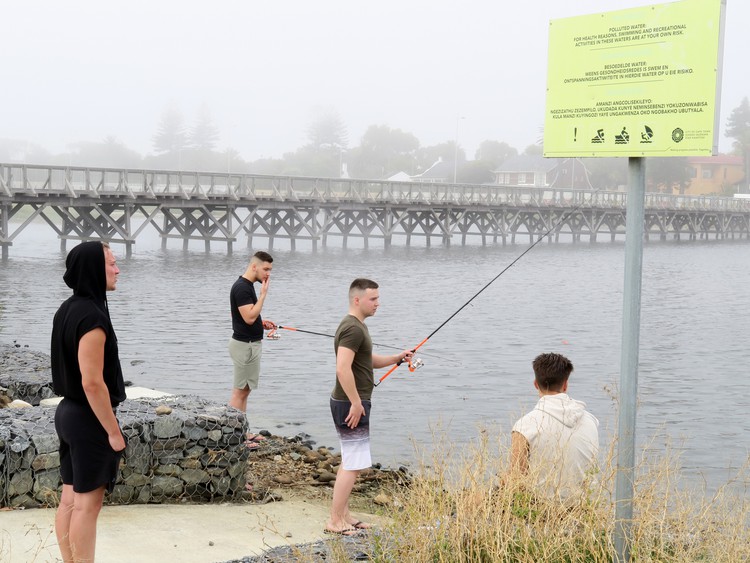 As mist rolled in from the Atlantic on Friday afternoon a group of young tourists from Finland attempted to fish in the polluted Milnerton Lagoon next to a sign warning against recreational activities. Photo: Steve Kretzmann

The deadline for fixing the Potsdam sewage works has been pushed out to 2028, in spite of fears that effluent from the sewage works is contributing to the pollution of the Milnerton Lagoon in Cape Town. The lagoon has been effectively closed to public use for two years.

The City of Cape Town has not yet properly identified all the causes of pollution, and it has no plan to prevent pollution during upgrades to various parts of the sewerage infrastructure.

This has emerged from the updated compliance audit issued by the Green Scorpions – the Environmental Management Inspectorate housed in the Western Cape Department of Environmental Affairs & Development Planning (Environment Department) on 29 October.

In September last year, the Green Scorpions issued a directive to the City to clean up the polluted Diep River, which forms the Milnerton Lagoon, which is an estuary.

The City appealed against the September 2020 directive, and an amended directive was issued in January this year. The latest compliance audit, distributed to the general public by the Organisation Undoing Tax Abuse (OUTA) on 6 December, reveals that the City is compliant with just five of 16 conditions imposed.

OUTA and the Milnerton Central Residents’ Association have led civil society efforts to stop pollution of the lagoon by submitting complaints to the relevant authorities since 2019.

The first condition in the directive is for the City to speed up the investigation of illicit discharge into the stormwater drainage systems and surrounding water courses, but the Environment Department notes in the updated compliance audit that while the City has submitted the required report, “there are however notable sources of pollution that have not yet been investigated”.

“The investigation into the illegal discharge into stormwater drainage systems are not adequate in addressing the additional sources of pollution,” notes the audit.

Regarding the City’s submission of revised plans for the Potsdam sewage treatment plant, Koeberg, and Sanddrift Pump Stations to address pollution which may occur while upgrades to the facilities are in progress, the audit notes the City’s plan does not contain measures to prevent the pollution from occurring.

The audit also notes that the City has requested considerable extensions on a number of infrastructure upgrades required to prevent ongoing pollution.

In dry summer months the treated effluent from the Potsdam sewage works is often the only source of water flowing into the Diep River, and if not treated to the minimum standards stipulated by the national Department of Water and Sanitation (DWS), is a major source of pollution to the estuary.

The initial directive issued in September last year stipulated that the necessary upgrades to the Potsdam facility needed to be completed by 2022. The upgrade would increase its capacity from 45 to 100 million litres of sewage per day. In appealing against the initial directive, the City provided a new upgrade completion date of 2025. But the updated compliance audit notes the City is now saying the upgrade would only be completed in 2028.

The Environment Department also states in the audit that the City needs to explain why areas such as Joe Slovo and Phoenix detention ponds, which impact the Diep River catchment, are still “having problems with litter and waste as confirmed by a recent site inspection”.

The new mayoral committee member for water and waste, Zahid Badroodien, said the City was working to progressively achieve full compliance with the Environment Department’s requirements and oversight reports were provided to local subcouncils each month.

Badroodien said partial compliance on several of the directives showed that progress was being made, and efforts to investigate pollution sources, improve waste management, and combat illegal dumping were continuing.

He said the City had made significant progress but “major societal challenges remain”, with City statistics showing 75% of sewage overflows due to residents using sewers illegally. As a result, the City plans to “drastically intensify proactive cleaning of sewer lines citywide”. Illegal occupations of land, especially where the City could not provide services, also contributed to pollution of the catchment area, Badroodien said.

However, OUTA senior legal project manager Andrea van Heerden said according to the Water Use Licence issued by DWS, treated effluent from Potsdam is only allowed to be discharged into the Diep River from one point, yet OUTA inspections revealed emergency discharges from other points.

They were unable to determine whether these discharges were legal, as the relevant documents from DWS and the City to show whether a departure from the conditions of the Water Use Licence had been allowed, were not being provided.

She said OUTA was preparing applications in accordance with the Promotion of Access to Information Act in a bid to obtain this information.