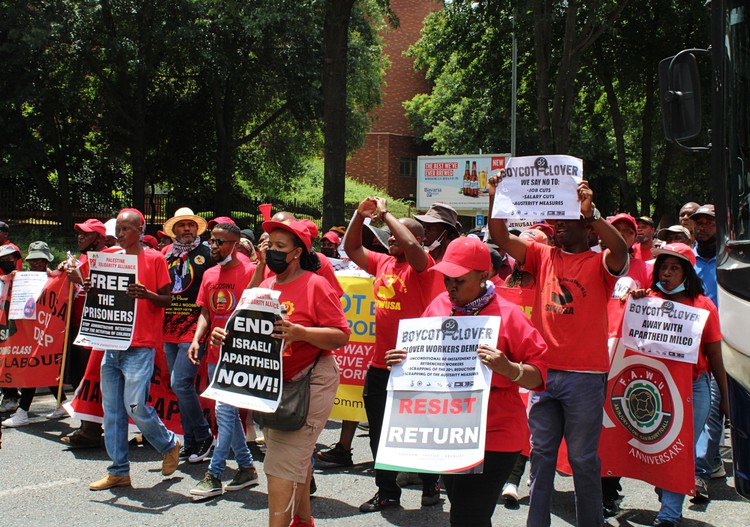 Hundreds of striking Clover workers marched through the streets of Sandton, Johannesburg on Thursday morning as part of a national and international day of action against the dairy producer.

The South African Federation of Trade Unions (SAFTU) and its affiliates, Food and Allied Workers’ Union (FAWU) and the General Industries Workers’ Unions of South Africa (GIWUSA), organised the day of action in solidarity with Clover workers, who have been on strike since November 2021.

Workers are demanding that Clover stop plans for further retrenchments and salary cuts. They also demand that the company reinstate all dismissed workers.

Joined by activist groups and affiliate unions including the National Union of Metalworkers of South Africa and the Democratised Transport Logistics and Allied Workers Union, the workers also picketed outside the Israel Trade and Economic Office to Southern Africa in Sandton. Workers want the company to be independent of the Israeli company Central Bottling Company (CBC) which owns Clover through the Milco SA consortium.

GIWUSA president Mametlwe Sebei said working conditions and the general treatment of workers worsened since Milco bought Clover. He said the company was undoing all progress and gains made regarding workers rights.

“Your enemy is the enemy of the Palestinian people. The brutality you are experiencing under the Milco dictatorship is not new to Palestinian people who are subjected to the vile system of colonialism, oppression and brutality under the Israeli regime,” he said while addressing the crowd.

Noor Ahmad from the Palestine Solidarity Alliance, who also joined the picket, said it was encouraging to see the striking workers display solidarity with Palestine.

One worker, who asked to not be named, said he had a tough Christmas because he had not been paid since the strike began. He said he was not going to stop striking until the unions’ demands are met.

In Cape Town, about 60 people picketed outside Clover’s central distribution centre in Matroosfontein. Abeedah Adams from GIWUSA said when they arrived outside Clover, they were met by armed private security guards. She said the picket was peaceful and there were no clashes between the guards and picketers.

According to the unions, demonstrations were also scheduled to take place overseas, including outside the Coca Cola factory in Israel-Palestine, outside the Israel Consulate in New York and outside the South African embassies in England and Belgium.

Last week, Clover management submitted an urgent application to interdict the strike and product boycott campaigns after striking workers removed Clover products from shop shelves and placed them in trolleys in the stores.

The applications were heard on Friday and Monday. The Labour Court issued an interim order on Tuesday to the general secretaries and office bearers of GIWUSA and FAWU to publicly denounce all violence and intimidation of non-striking workers and damage to property.

The court also ordered the unions to “remove wording encouraging the removal of all Clover products from shelves and stacking them into trolleys in supermarket aisles, and placing stickers on such products”. The court did not grant the interdict against the strike.

Vuka Chonco from FAWU said unions would be meeting Clover management on Friday to try to resolve the strike. They first met on 23 January but Chonco said they did not reach any resolutions.

“Going into the meeting, our demands are clear. We want all dismissed workers to go back to work unconditionally, we want a moratorium on the closure of factories and we want Milco to go back to Israel and leave our Clover because Clover belongs to us,” he said.

Meanwhile, a case of murder has been opened at the Midrand Police Station following an incident at the weekend in which one person died.

In a statement on Sunday, Clover said a white bus loaded with striking workers had intercepted a Clover delivery vehicle escorted by Fidelity security guards on Saturday. One of the guards, Tshephe Molatsi, had been killed.

“Although security officers responded to being pelted with bottles and rocks by firing rubber bullets, striking workers advanced and were assisted by looters in emptying the Clover truck. Mr Molatsi was shot in the head and then repeatedly beaten by strikers until Metro Police arrived and striking workers fled with [Molatsi’s] shotgun. Mr Molatsi was pronounced dead at the scene,” the statement read.

Lieutenant-Colonel Mavela Masondo from the SA Police Service said: “It is alleged that the deceased was in a car with a colleague, escorting a Clover truck in Midrand on Saturday 22 January, when they were attacked by people who threw stones and fired shots at them. The deceased was hit by a bullet and died on the scene.”

He said an investigation is underway and no arrests have been made yet.

“Police are appealing to anyone who might have information that can help in the investigation or assist apprehend the suspects to please call the nearest police station or crime stop on 08600 10111,” said Masondo.

According to Wahl Bartmann, Chief Executive Officer of Fidelity Services Group, Molatsi had been a Fidelity Specialist Services employee for seven and a half years.

“We extend our heartfelt condolences to Officer Molatsi’s family and loved ones and his many friends. He enjoyed the greatest respect from his Fidelity colleagues who are all deeply shocked by his passing. He will be remembered for his dedication and extreme bravery,” he said.

FAWU and GIWUSA are also investigating and will comment at a later stage, said Charles Phahla, GIWUSA national organiser. He said the unions condemned all incidents of violence and criminal activity.

Steven Velthuysen, Clover Group Manager: Legal & Secretarial, expressed shock at the incident, saying, “this is not industrial action, this is murder.”

“We are extremely upset about this awful incident. Our hearts go out to Mr Molatsi’s family and loved ones. The union bears full responsibility for this appalling murder. They will need to answer for it,” he said.

Previous:  Hundreds of people conned out of R800 in jobs-for-cash scam