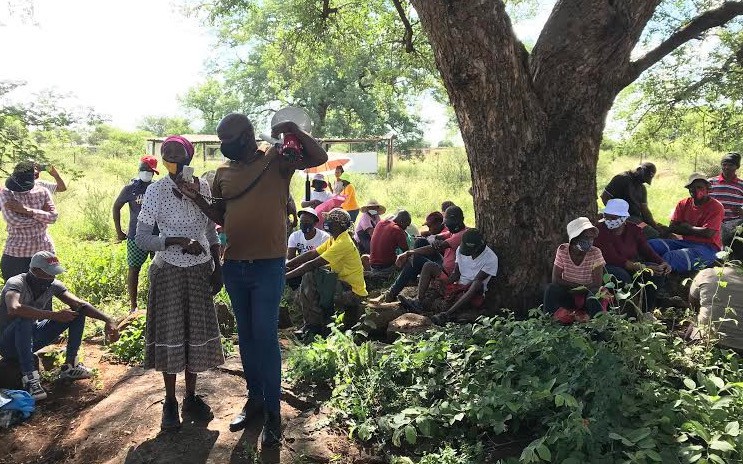 Mosadi Kwele speaks at a community meeting held on 19 January 2020, while Itumeleng Nyaka holds the megaphone. Like many others at the meeting, Kwele says Ikwezi Vanadium must respond to the community’s queries before continuing with mining activities at Haakdoornfontein farm. Photo: Masego Mafata

Tensions are high between the villagers in Mononono in North West Province and mining company Ikwezi Vanadium after at least seven people were injured, some seriously, in protests since December 2020.

On 8 January, members of a private security company, the National Strike Intervention Unit (NSIU) shot rubber bullets at Mononono residents who were protesting against Ikwezi Vanadium’s activities on Haakdoornfontein farm.

One of the injured was Thumeka Ngcishi who told GroundUp she had spent five days in the hospital, some of them in intensive care.

Community members fear that further clashes may result in more injuries, should the two sides fail to reach a consensus about mining activities on Haakdoornfontein farm.

According to Sam Ditsele, a member of the Mononono Community Structure, the community wants Ikwezi to stop its activities until it has clearly communicated its mining plans, and how the community will benefit from or be compensated for Ikwezi’s mining on Haarkdoornfontein farm. The community has also requested an environmental impact assessment because the farm is close to a gravesite and houses.

The farm is on government-owned land in Mononono, near the Limpopo border.

“I was born and bred in Mononono, and for as long as I can remember, we have used the land for grazing. Our cows drink water from the nearby water source and we have people from our community buried in a graveyard a few metres from the farm. That land is communal land,” she said.

Mononono is surrounded by mines and it came as no surprise to the community when vanadium was discovered in the area, she said.

Ikwezi Vanadium obtained prospecting rights for vanadium from the Department of Minerals and Energy on the Haakdoornfontein farm in October 2011. The permit was amended on 4 March 2019 to include permission for Ikwezi to “remove and dispose of bulk samples(s) of iron, titanium and vanadium”.

“Ikwezi began its involvement with the Mononono community, amongst other communities, sometime in 2010,” said Lenin Ngwenya, legal and compliance administrator at Ikwezi Mining.

“The Mononono community was consulted and has always been notified of all the planned activities of the Company, with specific emphasis on the current prospecting and bulk sampling operations”.

“Consultations were held with the broader community at large, including the signing of various agreements with the respective traditional authorities at the different stages of the company’s operations. Pursuant to obtaining bulk sampling permissions in 2019, the company held further consultations with community leadership and the respective traditional authority, which ultimately led to the signing of the Memorandum of Agreement with the respective communities, Mononono Community included,” said Bonani Ndlovu, legal and compliance officer at Ikwezi Mining.

But Ditsele said the Mononono Community Structure itself had not signed any agreement because there were outstanding concerns.

He said the community had requested documents explaining the legalities and permissions that Ikwezi had to mine on Haakdoornfontein farm. He said they had also asked how the community would be compensated, should Ikwezi extract vanadium.

“We told Ikwezi that they cannot proceed with the process of bulk sampling until the community’s concerns are resolved,” he said.

GroundUp asked for permission to view the agreement, but Ikwezi said the document was confidential.

Ditsele said Ikwezi had begun bulk sampling before resolving the matters that the community had raised. This had led to frequent protests by community members at Haakdoornfontein farm. 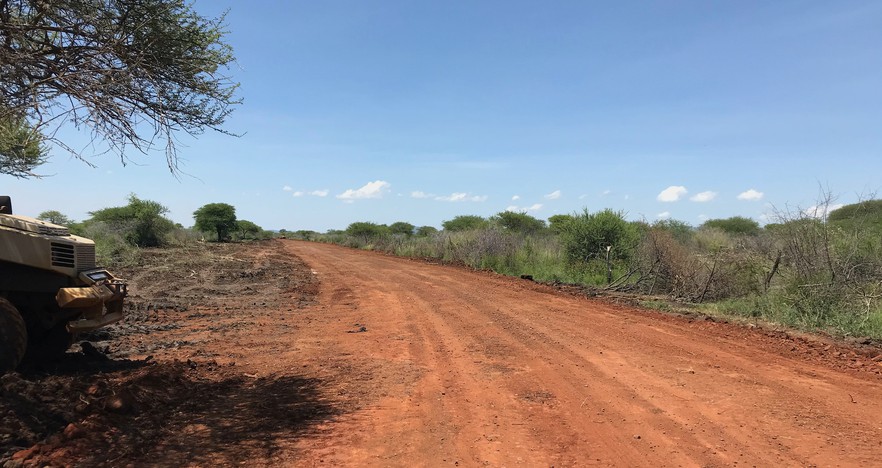 This road leads to the site where Ikwezi Vanadium is carrying out bulk sampling operations. The area is guarded by a private security company. GroundUp was not allowed to go beyond the security point. Photo: Masego Mafata

The two sides have been to and fro in court since July 2019, when Ikwezi won an interdict in the North West High Court interdicting Ditsele and several other community members from interfering with the bulk sampling process.

Then in October 2019, the court ordered Ikwezi to halt the bulk sampling process while consultations to resolve the matters raised by community members continued. But Ikwezi returned to the farm in December 2020 to continue the bulk sampling process. Tensions mounted at Haakdoornfontein farm and Ikwezi sought the services of the NSIU security company to protect machinery from vandalism by Mononono community members, the company argued in the founding affidavit for the July 2019 court application.

On 8 December 2020, The NSIU apparently opened fire and shot at protesting community members with rubber bullets. The protesters retaliated with rocks and sticks and police were called. The NSIU opened fire again on protesting community members on 8 January 2021. A total of 20 people were wounded in the two incidents, including one police officer, according to Ditsele. SAPS Brigadier Mokgwabone confirmed that police had been called in but said seven people had been injured, one a security guard. He denied that a police officer was among the injured.

“We feel failed by the government and law enforcement,” said Ditsele. “According to an interim interdict in a 15 December court order from the North West High Court, Ikwezi representatives were supposed to be arrested for violating the October 2019 court order.”

But Ngwenya said Ikwezi had complied with the court order while challenging it. “The Company complied with the court order as we left site upon receipt. We challenged the [15 December] order and remained offsite pending the delivery of the judgment, in full compliance with the order of 15 December 2020. Subsequently, the North West High Court ruled in our favour in a judgment delivered on 31 December 2020,” said Ngwenya. This ruling gave Ikwezi permission to resume activities.

At a community meeting on 19 January attended by GroundUp, community members expressed fear and disappointment at the situation. They said their concerns about access to land and resources on Haakdoornfontein farm remained unresolved. So did requests for clarity about an environmental impact assessment and the relocation of cattle.

Community members who live closest to Haakdoornfontein farm complained about the noise the machinery makes during the extraction of samples. Lepote said she struggled to sleep because the machines were running until late at night.

Many community members said they favoured a mine which would provide employment and opportunities for the people of Mononono but were uncertain whether Ikwezi would guarantee that.

Asked whether Mononono residents would be hired by Ikwezi at any point, Ngwenya said, “the recruitment processes are ongoing with preference given to the local communities, including but not limited to the Mononono community”. 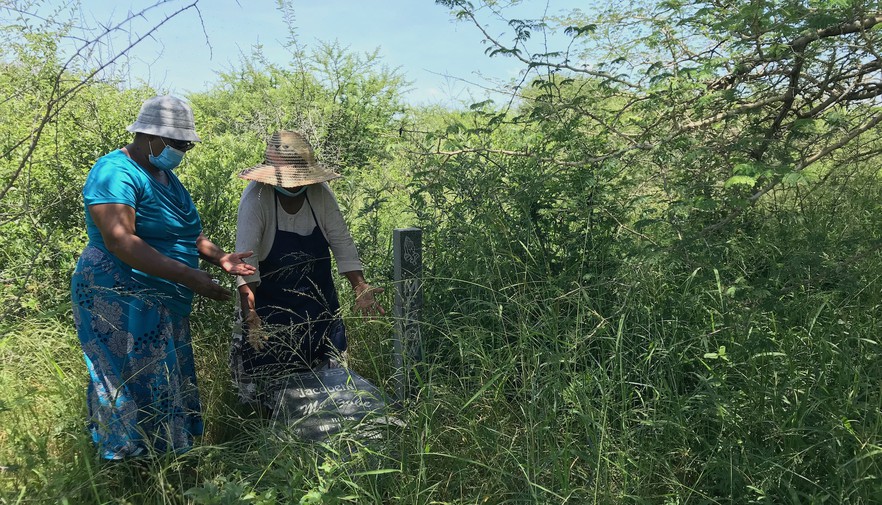 October 2011: Ikwezi Vanadium gets prospecting rights for vanadium from the Department of Minerals and Energy on the Haakdoorfontein farm.

Next:  Sexual harassment: CCMA rules against Department of Agriculture