Fishing communities fear their livelihoods are threatened by Karpowership plan 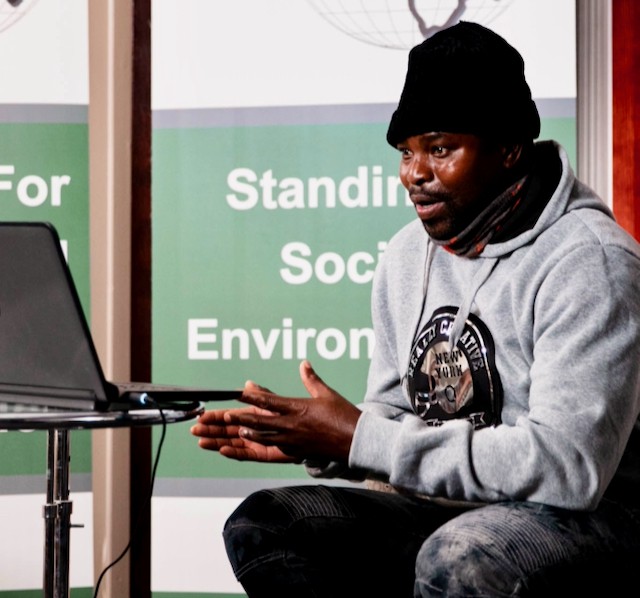 Ntsindiso Ncgavu, of Coastal Links Port St John’s, spoke at the Oceans Tribunal, held at the DoubleTree hotel in Cape Town on 21 and 22 September, where small-scale fishers expressed concern over the impact power ships will have on fishing communities. Photo supplied

Fishing communities in Saldanha Bay and Gqeberha are worried that newly approved gas power ships will drive away or even kill the fish their livelihoods depend upon.

“What will happen if we can’t fish? Who is going to put food on the table? How will our fishermen get an income?” asked Carmelita Mostert, a fisher from Saldanha Bay.

Environmental organisation Green Connection says these floating gas power plants will have a devastating impact on communities that depend on small-scale fishing.

Mostert lives in Saldanha Bay and owns two fishing boats. Her father was also a fisher. “I am dependent on the sea. I have no other income than the ocean,” she said.

She was one of half a dozen small-scale fishing representatives who spoke during the Oceans Tribunal on Wednesday in Cape Town, discussing the impact of the oil and gas industry on their communities.

Vuyiseka Mani, from Qqeberha, said that while the energy projects promised job opportunities, it would be at the expense of fishing communities.

Civil society organisations have criticised NERSA for approving the licences in spite of being refused environmental authorisation by the Department of Forestry, Fisheries, and the Environment in June.

In April, writing in the Daily Maverick, Tony Carnie explained: “[P]owerships, much like giant kettles, use large volumes of seawater to cool down the heat from onboard gas and steam turbines, thereafter discharging the heated wastewater back into the sea.” The raised water temperatures “will kill off a variety of marine life in the immediate vicinity of the powerships and possibly change underwater oxygen levels and disrupt the wider marine ecology around Richards Bay, Saldanha and Ngqura harbours.”

Michelle Koyama, attorney at the Centre for Environmental Rights (CER), said the approval without environmental authorisation was “premature”.

However, NERSA approval only allows for the generation of electricity by Karpowership SA, not the building of infrastructure.

“Until Environmental Authorisation is granted, Karpowership cannot operate or commence with any construction,” said Koyama.

Koyama said the power ships will emit methane, a potent greenhouse gas. The noise generated by the ships had also not been adequately addressed, especially since this could drive away marine animal populations.

The CER, on behalf of environmental group groundWork, submitted objections to NERSA in August. The CER said the power ships only have a lifespan of about 20 years, making them unnecessarily costly. In addition, it objected to the greenhouse gas emissions and that the project had not received environmental authorisation.

NERSA spokesperson Charles Hlebela said that environmental authorisations, the mitigation of pollution, and the impact on small-scale fishers do not fall under its jurisdiction.

Next:  Nurses return to Willowvale clinic after two-month absence