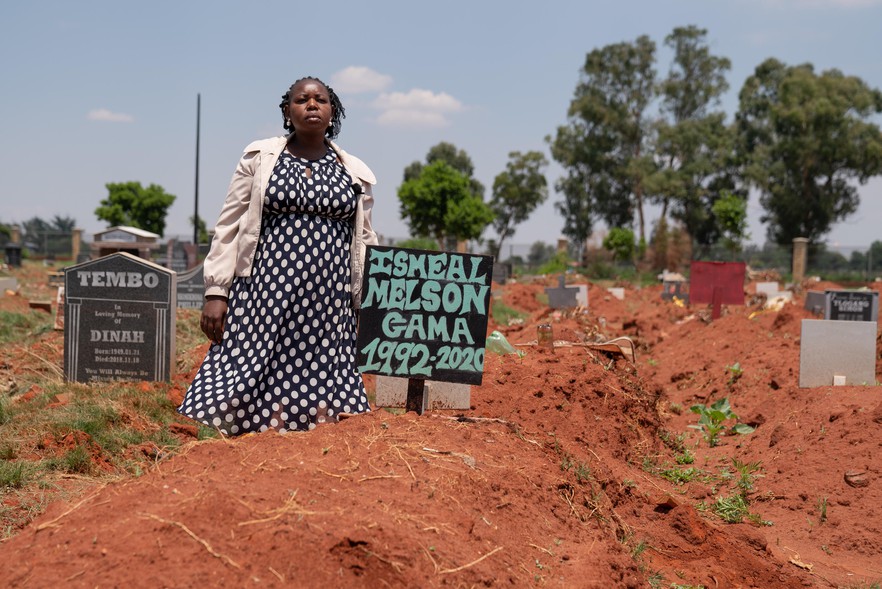 Thembi Gamba stands next to the grave of her brother, Ishmael, who died in police custody. Photo: Ihsaan Haffejee

During the first week of Covid-19 lockdown last year, Ishmael Gama died in custody at Lenasia police station. In March, the Independent Police Investigative Directorate (IPID) recommended that police management discipline eight officers implicated in Gama’s torture and killing. Months later, the police are yet to do so. Gama’s case is typical in Gauteng, where police have reportedly killed more than 900 people since 2012. Now, a new analysis of watchdog statistics suggests that Gauteng police management have stopped disciplining officers implicated in violent crimes altogether. Viewfinder reports.

At around midnight on 31 March 2020 police officers caught two men stripping car parts at a vehicle pound in Lenasia, south of Johannesburg. The officers tied the pair up, detained them inside a security hut and started boiling a kettle of water, recalled Themba Mdluli, one of the men interviewed by Viewfinder last year.

Then, he said, the officers poured the contents of the kettle all over him and his friend, Ishmael Gama. The officers refilled the kettle and repeated the routine. Over the next few hours, the police beat the two continuously, Mdluli said.

The torture apparently broke the two men - they gave up the names of others whom they said had stolen car parts from the pound in the past. For the police, this was a lead worth pursuing. As the sun rose the next morning, the police drove Gama and Mdluli into Thembelihle informal settlement to search for the others. There the police found and arrested Neville Nyandeni, 36, and drove them all back to the pound.

“They hit us with pipes. Every police officer that got there would join in on the beating,” said Nyandeni.

“We tried to crawl under the cars to hide. They’d pull us out and beat us even more … from 9am till 1pm, the whole time. Ishmael couldn’t even walk. He couldn’t do anything. They didn’t care, and they didn’t even give us water, that whole time.”

Nyandeni led police to a chop shop where stolen car parts from the pound could be found. The police raided the place and later piled up the recovered loot back at the pound. They called Cannedy Netshitungulu, a reporter from Rising Sun Lenasia community newspaper. The photos Netshitungulu took on the day show the pile of car parts and the suspects arrested by police. In one of the photos, a man lies face down on the tarmac - barefoot except for one tattered sock. That was Ishmael Gama, according to his older sister Thembi Nkosi, who identified him by his clothes. 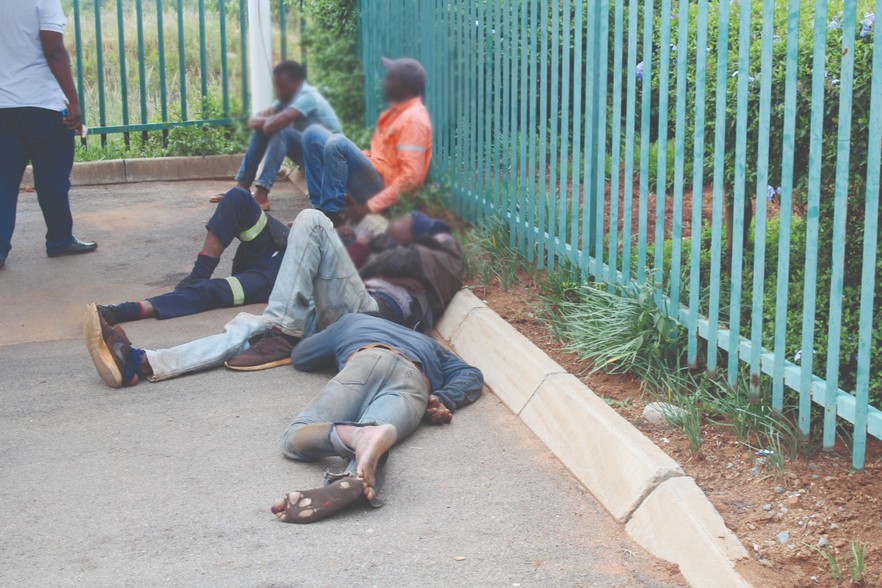 A photo taken by a journalist at a Lenasia community newspaper showing the men police arrested and detained at a vehicle pound in Lenasia, south of Johannesburg, on 1 April 2020. Gama, identified by his sister, is apparently the man seen lying face down. He died in police custody later that day. Photo: Cannedy Netshitungulu / Rising Sun Lenasia (copied as fair use)

During a phone call, Netshitungulu said that he had no idea that Gama was seriously wounded at the time. The Rising Sun’s caption on the arrests, under the headline “Lockdown, Lock up”, simply said the police had “followed a lead” to recover “motorcycles, tyres, radiators, car batteries and a homemade firearm”. Six suspects were behind bars as the “investigation” continued.

Later that day, at the police station’s charge office, Gama spoke to his friend Mdluli for the last time as he drifted in and out of consciousness. Nyandeni recalls that Gama’s eyes were rolling back in his head. Gama asked Mdluli to bear witness to his death.

“Themba, I am dying. I want to die in front of you,” he said, according to Mdluli.

Nyandeni recalls that a police officer - a “captain”, he says - scoffed when he pleaded for an ambulance for Gama. Then, a police officer led Mdluli and Nyandeni to the cells. They were told to leave Gama behind. There, Gama died.

The Independent Police Investigative Directorate (IPID) reported the case to Parliament as one of the killings by police related to the Covid-19 lockdown. In March this year, IPID recommended that eight police officers be disciplined for their alleged involvement in Gama’s killing. Fifteen weeks later this has not happened, according to IPID.

Cases of assault, torture and killings pervasive, but police not arrested

Of the nine provinces, Gauteng’s IPID office registers some of the highest numbers of deaths in custody and assault cases against the police. Police in the province have also killed more than 900 people since 2012, according to the watchdog’s tally. In recent months Johannesburg, particularly the townships to the south of the city, has provided the backdrop for a number of high profile cases.

A review of IPID’s case data for Gauteng and an interview with a Johannesburg-based attorney who represents police torture victims suggests that a significant proportion of police officers in the province use - or at least accept - violence when interrogating detainees. In Gama’s case, the fact that police invited a journalist to the scene where a man lay dying from injuries that they had apparently inflicted on him probably reflects this acceptance.

Complaints of severe assaults and torture in custody are common in the more than 7,000 cases that IPID has registered in the province between 2012 and 2020. Viewfinder has read the complaint descriptions for many of these cases.

Peter Jordi, an associate professor and the head at the Wits University Law Clinic, has represented police torture victims in civil suits against the police for around 30 years.

“When I started with these kinds of cases, torture seemed to be used by the more specialised units,” he said, singling out the now defunct Brixton Murder and Robbery Unit.

“But it seems to have spread more widely.”

Jordi now represents Themba Mdluli and Thembi Nkosi - Ishmael Gama’s sister. They are suing the Minister of Police for damages. Even if they are successful it will not necessarily mean that the officers accused in Gama’s killing will be held accountable. Civil claims are settled by SAPS as a department, often without consequences for the officers whose actions resulted in a lawsuit.

In all the high-profile cases from recent months mentioned above, police officers were arrested. But, this gives a skewed impression. Available data from recent years (IPID did not publish arrests data in 2018/19) suggests that the police watchdog makes fewer than three arrests for every 100 cases it registers in Gauteng.

Has Gauteng SAPS stopped disciplining cops who torture and kill?

Yet, the low number of arrests is eclipsed by another statistic from IPID in the province. Between April 2016 and March 2020 (the most recent month for which audited statistics are available), IPID has not reported on SAPS disciplining a single police officer implicated in a violent crime. This is in spite of more than 300 IPID disciplinary recommendations against police officers for offences ranging from shootings, torture, assault and rape; and, more than 50 recommendations that SAPS discipline officers for killings and deaths in custody. 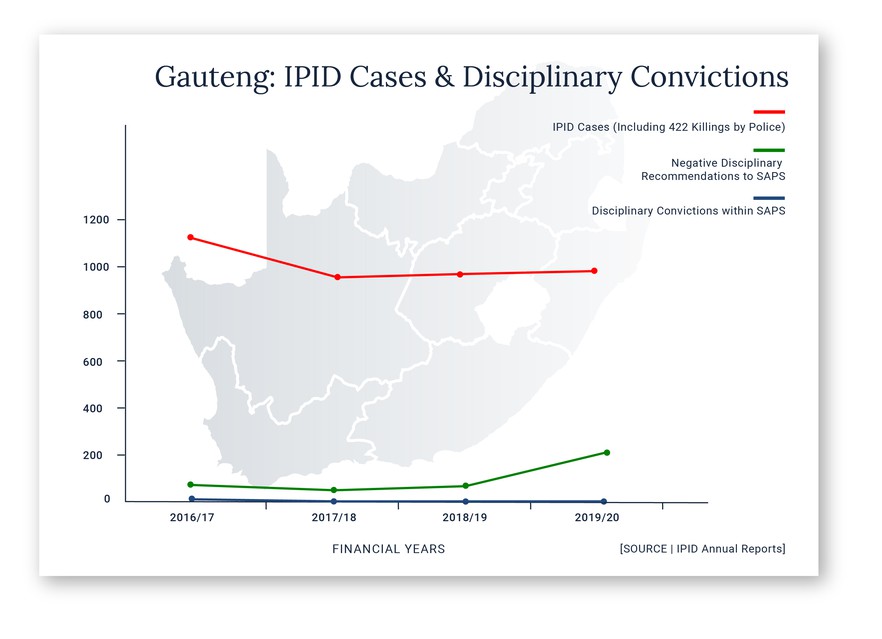 According to IPID statistics, SAPS in Gauteng entirely stopped disciplining police officers implicated in violent crimes between 2016 and 2020. Visualisation: Viewfinder

Viewfinder has previously reported on SAPS’s apparent contempt for watchdog findings and recommendations against its own officers. Yet, these statistics from Gauteng - which suggest that no officers have been disciplined for violent crimes between 2016 and 2020 - appear to be too outlandish to be true. Viewfinder contacted IPID’s spokesperson Ndileka Cola, compliance monitoring head Mariaan Geerdts and SAPS spokesman Captain Kay Makhubele for clarification. They all failed to respond to the query.

In Viewfinder’s experience, SAPS rarely responds to questions about alleged killings and brutality by its members or police management’s usual failure to act against officers implicated in these crimes. When station commanders are confronted with killings by police that have happened under their watch, they are likely to refer queries to provincial spokespeople.

This is what Lenasia station commander Brigadier YP Baloyi did when asked whether his office investigated or took any action against subordinates accused in Gama’s killing. SAPS provincial spokespeople routinely refer queries to IPID.

This loop of referral and silence conceals a deep, nationwide disagreement between SAPS management and IPID’s senior officials.

“The fact that we investigate the police does not excuse police management from doing their management function, which is to take action against their members when they become aware of misconduct,” said one senior IPID official, quoted anonymously here because they were speaking without an official mandate. Viewfinder is aware that this view is held by other senior IPID officials, as well.

But, SAPS commanders and management see things differently. Their spokespeople often contend that the police must wait for IPID’s recommendations before SAPS can act against implicated officers. Yet, Viewfinder’s investigation has previously revealed that, even so, SAPS rarely disciplines officers with recommendations against them.

So problem officers, like those accused of torturing and killing Ishmael Gama, usually remain on duty - both when a case is registered and when the watchdog makes negative findings against them.

Reflections on the death of Ishmael Gama

The families and friends of people killed by police have not studied the data or the details of the disagreements between IPID officials and police management. Ishmael Gama’s sister Thembi Nkosi knows only that she was turned away when she arrived at Lenasia police station to ask whether the station commander had dealt with the men accused of beating her brother to death.

“I’m still traumatised because of what happened to us,” said Nyandeni.

“What the police did is totally wrong, because they are the people that are supposed to help us. But, they are the ones who kill us. Since this whole thing happened, nothing has been done. They killed my friend right in front of me.” 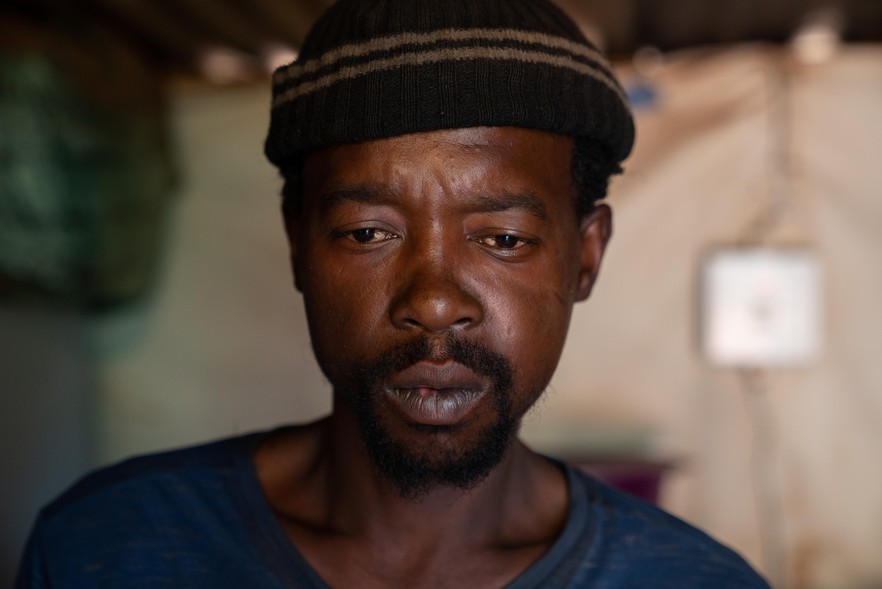 When South Africa’s first lockdown was enforced, Gama lost his part-time job at a catering company. This, Nkosi believes, is what drove her brother to steal car parts at the pound on the night before he died. Though he struggled with addiction, he remained a good son and provided for his mother, she says.

“The station commander has never set foot in this house to discuss this case,” said Maria Gama, Ishmael and Thembi’s mother, during an interview at her house in Lenasia. She is frail and sickly.

“They are enjoying themselves in their houses, drinking tea with milk and sugar. What am I drinking? I also want a comfortable life. That is what Ishmael gave me. It was enough for me, even if it wasn’t much, he would make sure we sleep with food on the table. Right now I don’t have anything.”

Produced for GroundUp by Viewfinder. This article forms part of an ongoing investigation of police brutality and non-accountability in South Africa. It was funded, in part, by the Henry Nxumalo Fund for Investigative Reporting.

Next:  Equal Education goes back to court to force government to feed hungry school children

© 2021 Viewfinder and GroundUp. All rights reserved. Please contact Viewfinder for permission to republish.