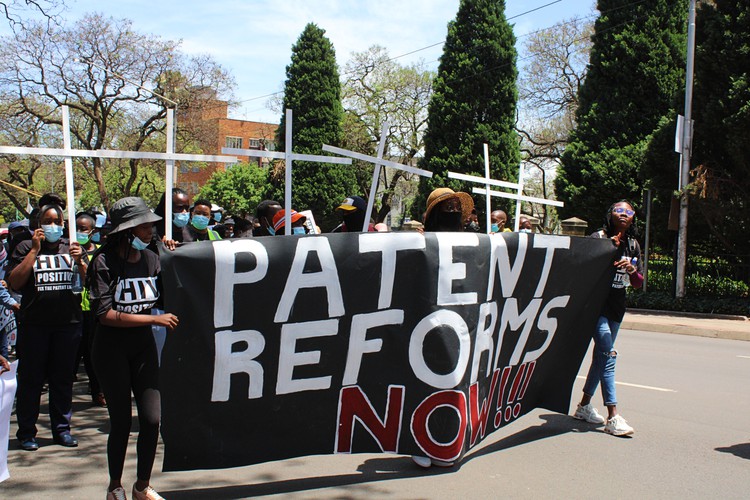 Activists marched to the Department of Trade, Industry and Competition on Tuesday calling for urgent reform of patent laws. Photo: Masego Mafata

About 100 people marched from Park Street in Pretoria to the Department of Trade, Industry and Competition (DTIC) on Tuesday, calling on the government to amend intellectual property laws to make medication for Covid and other life-threatening diseases more accessible.

The march was organised by the Fix The Patent Laws Campaign, a coalition of about 40 civil society organisations and patient groups which include the Treatment Action Campaign (TAC), Doctors Without Borders and Cancer Alliance.

Some marchers held white crosses and others carried a box resembling a coffin, in commemoration of people who lost their lives because they were unable to access life-saving medication due to patent laws.

One of the group’s demands is for the department to urgently publish draft amendments to the Patents Act. The activists hope that these amendments will remove barriers to equitable and affordable access to medicine.

“We call on the South African government to provide strict examination of all patents for pharmaceutical products, now and in future, so that patents are not automatically granted for life-saving medicines, which limits supply and increases the prices of these medicines,” the memorandum stated.

Sehoma said the campaign has been calling for an amendment of the patent laws for more than ten years. Unequal access to Covid medication and vaccines has heightened the need to reform patent laws, she said.

“We applaud the government for adopting the Intellectual Property Policy in 2018 because it makes important commitments to reforming patent laws and prioritising people’s access to healthcare. But now the DTIC is holding onto the draft amendments and our patent laws remain unchanged since the policy was adopted,” said Teboho Tenyane from TAC.

Tenyane, who read out the memorandum, said the group had marched to the DTIC in March this year, making the same demands, but had received no response.

“We are requesting a meeting and giving them until 19 November. If they don’t respond, we will be back, and if it means we must sleep outside here until they respond, we are prepared to do that,” he said.

The memorandum was accepted by Anganathi Ntshinka, a member of staff in the office of Minister of Trade, Industry and Competition Ebrahim Patel.

Next:  Are SAPS commanders ignoring instructions to discipline brutal cops?