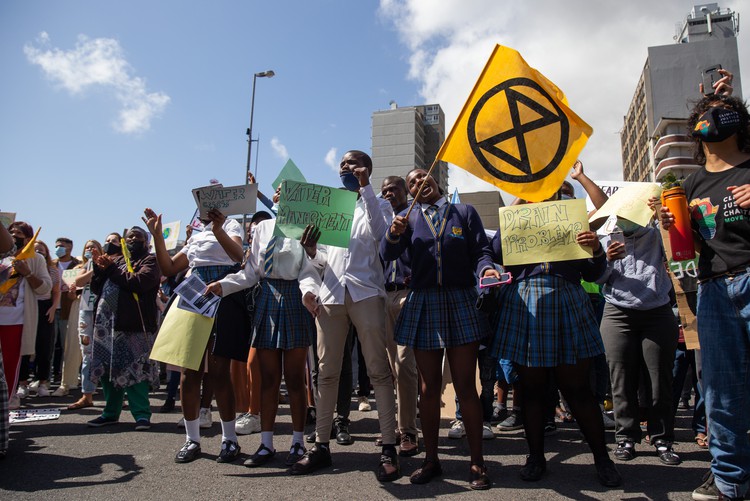 About 200 people from all walks of life picketed outside Parliament in Cape Town on Friday, calling for the government to take urgent action against climate change. Photo: Ashraf Hendricks

About 200 demonstrators gathered outside Parliament on Friday calling for the government to take urgent action against climate change. The protest forms part of a week-long series of events by civil society and other organisations, calling for the transformation of the Department of Mineral Resources and Energy (DMRE).

The group’s demands included the introduction of climate change literacy in schools; an end to the use of fossil fuel for electricity production by 2035; and the establishment of a Parliamentary Joint Standing Committee focused on climate change.

Sarah Robyn Farrell, advocacy coordinator at the African Climate Alliance (ACA), said that they are calling on the government “to take the silence behind climate change seriously”. Farrell also highlighted communities currently being affected by mining.

High school learner Raadiyah Sonday said, “Climate change is an ongoing issue for everybody”. She said that it was incredibly important that the youth participate in these protests.

Sonday said that it was important to hold the government accountable for its inaction. “I’d like to see the government take into account what activists are saying,” she said, adding that despite talk of change, “we can’t see it”.

The event on Friday forms part of a global climate strike, and was arranged by organisations including the ACA, 350Africa.org, Eastern Cape Environmental Network, Extinction Rebellion, Greenpeace Africa and Green Connection.

Next:  Salt River community celebrates shared heritage with the Palestinian cause