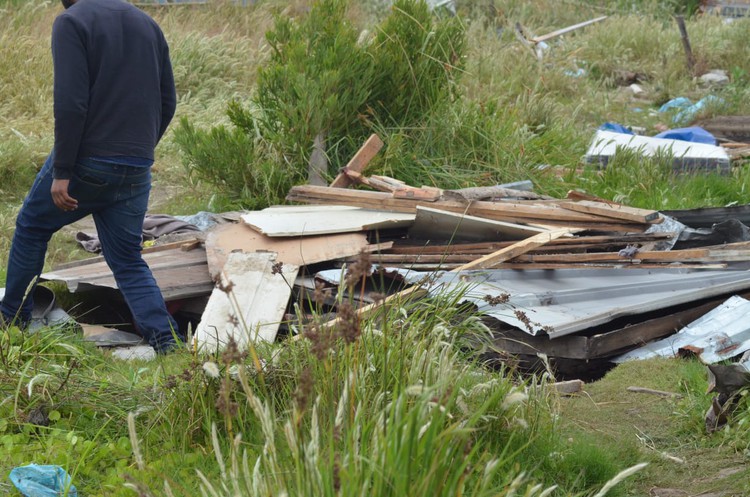 A task team has been formed by residents of Ethembeni informal settlement to demolish shacks left empty after the area flooded. Photo: Nombulelo Damba-Hendrik

Residents of Ethembeni informal settlement in Khayelitsha, Cape Town, have formed a task team to demolish unoccupied shacks themselves.

One of the members of the task team is community leader Bulelani Qolani, who made headlines in 2020 when the City of Cape Town’s Anti-Land Invasion Unit evicted people from the newly formed settlement.

He was evicted from his shack by City officials while naked.

The unoccupied shacks are demolished at night. The initiative follows the death of a man in one of the empty shacks last week. Residents say the shacks are being used by criminals.

Police spokesperson Frederick Van Wyk confirmed that Harare police had found the body of an unidentified man inside an empty shack. There were bruises on the body and the man’s hands had been tied.

Qolani said more than 20 unoccupied shacks have been demolished since they started last Thursday night.

He said when a sewer pipe burst last year August most shacks were flooded and shack owners abandoned their shacks to live with relatives or to put up shacks elsewhere. At the time the City of Cape Town said it was not sustainable to pump the water out because the settlement was on a flood plain.

“Criminals have noticed that there are empty shacks in this area. They are using them to do their criminal activities,” said Qolani.

“Now and then there were reports of break-ins. And in some shacks we see some dodgy boys hanging around. We informed the owners, those we know, to remove their shacks or to come back. But then the question was how, since most shacks were flooded,” said Qolani

“In the early hours of Wednesday one of the residents heard a man crying for help. The neighbour went to check what was happening and saw a group of three to four men carrying guns. They threatened to shoot him so he ran back to his shack.”

Qolani said the resident informed the community leaders in the morning and police were called.

He said what shocked them was that the dead man was not from the area, meaning he had been taken to be killed there. Qolani said the community then met on Wednesday and a task team was formed to demolish the unoccupied shacks. “Owners of the shacks were informed,” he said.

Qolani said they did not want to involve the City of Cape Town Anti-Land Invasion Unit because when City officials demolished the shacks they took the materials away.

“The aim is not to evict people but to fight crime. We do not take the material and owners are still allowed to rebuild their shacks as long as they promise not to abandon them again,” he said.

Another community leader, Rasta Madikana, said residents had decided all men in the area must be part of the task team.

“We understand that people left their shacks because of the flood and stinking water surrounding their houses. But it is also our duty to make sure that we live in a safe area,” said Madikana.

They were trying to drain the stinking water, he said. “We started by collecting sand and old bricks to put on the flooded area. We are slowly winning the fight.”

GroundUp’s questions to the City of Cape Town, sent on Wednesday, had not been answered by the time of publication.