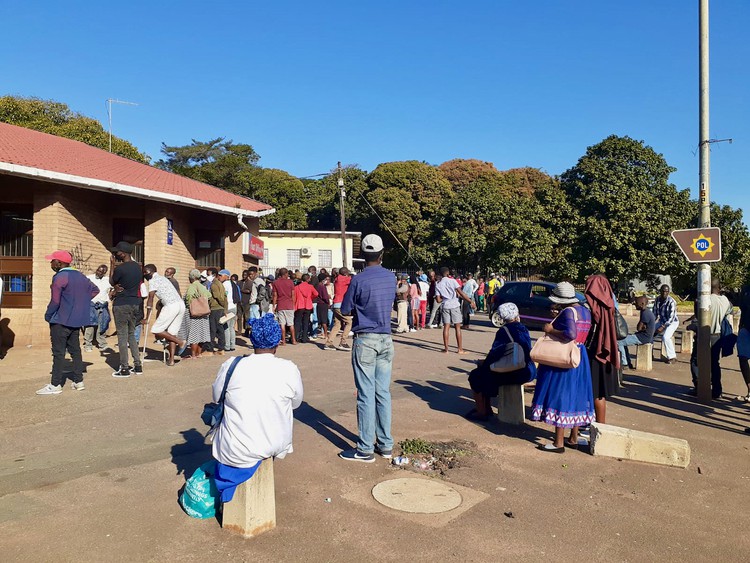 On Monday, Social Relief of Distress (SRD) beneficiaries formed long queues at Redhill Post Office in Durban. They complained about a lack of physical distancing and people jumping the queue.

Bonakele Mkhize, from Inanda, said she was so excited when she received an SMS confirming that the R350 grant she applied for a few weeks back had been approved.

“I couldn’t wait to get to the post office and collect my money but I wasn’t expecting a long queue. I arrived around 9am and went home empty-handed,” said Mkhize.

She said that the queue was so long that people were reserving spaces for other people. When it was time to enter the post office, chaos broke out. The police had to be called and the post office closed early.

“People just don’t listen. There is no social distancing and they all want to get in at the same time without waiting their turn,” said Mkhize. She said she chose Redhill because she thought it would be faster than her local post office.

Nhlanhla Ximba said he arrived early in the morning but found himself having to fight people who arrived after noon and were already making their way into the post office.

“I’m unemployed and do not know where I am going to get bus fare if I don’t make it inside the post office in time … I was turned away yesterday,” said Ximba.

The South African Post Office says it tries to control the queues using staggered SMS messages asking beneficiaries to visit their nearest post office to receive their grant when their grant is ready for collection.

“This makes it possible for us to ensure a manageable number of people at our branches, and it also makes sure only beneficiaries whose funds have actually been paid into Postbank visit their branch,” says Post Office spokesperson Johan Kruger.

“We do not allow any customer into a branch if they have not used the sanitiser dispenser at the door or are not wearing a mask. We use security officers to request customers to comply with social distancing rules,” he said.

Kruger said some people came hoping to get a grant without having received an SMS. “This leads to extended queues and often disappointed beneficiaries, who have to return another day when their money is indeed ready for them … We have now launched a campaign on social media to spread awareness of this.”

At the end of June, the South African Social Security Agency (SASSA) announced that it had taken a decision to re-examine declined Covid-19 grant applications because of the high number of rejections. In early June, close to 50% of processed applications did not qualify in terms of the criteria. SASSA decided to reconsider these before subjecting them to an appeal process, which comes at a cost and results in delays.

SASSA CEO Totsie Memela said in a statement that over 70% of those that did not qualify were either receiving or qualified for UIF benefits.

“More than two and a half million applicants have already been paid so far from over 3.2 million who applied for the Covid-19 grant. Updating the UIF database has brought such a relief to us and the affected beneficiaries, the numbers will rise daily until we have paid all deserving individuals who were previously declined,” said Memela.