Elections 2021: Plettenberg Bay has had no functioning council for months 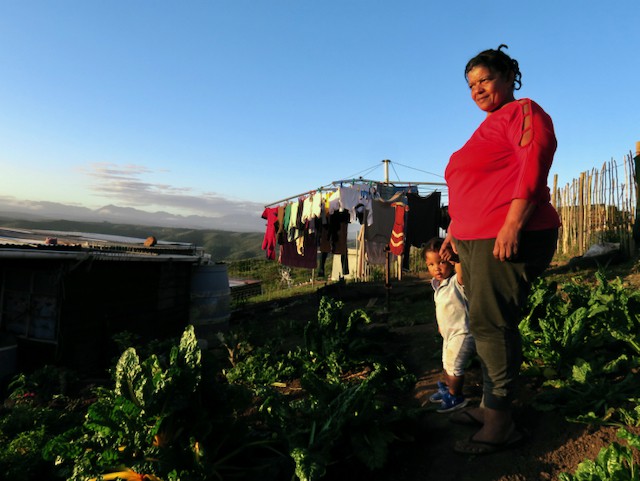 Charlotte November and her grandson Aiden van Rooyen with the vegetables she grows to supplement her family’s diet in Wittedrift, Bitou Municipality. Wittedrift is a small community near Plettenberg Bay where poorer residents have built homes on steep slopes that have since been purchased by the municipality. There are scattered formal state-subsidised homes in Wittedrift with electricity, water and sewage, but most homes receive no such services. November installed a septic tank for her wood and zinc home, built three years ago. She has ta rainwater tank but when it runs dry she has to fetch water from a communal tap at the bottom of the hill. Her home has no electricity. All photos: Steve Kretzmann

Bitou local municipality encompasses the tourist haven of Plettenberg Bay and surrounds. It appears to be well run, but its governance is now paralysed by a hung council in which the ANC and DA each hold six seats.

Deadlocks within a certain ambit can be decided by the Speaker, who is one of the six ANC councillors.

There are 13 seats in the Bitou council, but the minority Active United Front councillor and former executive mayor Peter Lobese was suspended with immediate effect following an order of the Western Cape High Court on Friday 10 September.

Lobese became mayor when he emerged as the kingmaker after the 2016 municipal elections and sided with the ANC. Nine months later, in May 2017, he swung to the DA, according to DA Bitou constituency chair Dave Swart. But after the DA initiated an investigation into political appointments in the mayor’s office, Lobese swung back to the ANC.

Meanwhile, during the 2017/18 financial year, Western Cape MEC for local government Anton Bredell, acting on allegations, instituted a forensic investigation into the procurement of goods and services by the municipality. The outcome of Bredell’s investigation was delivered to the municipal manager in February 2020.

When GroundUp asked to see the report, Bredell’s office responded that access to the report would have to be requested “in accordance with the provisions of the Promotion of Access to Information Act”, and if it were granted, personal information would be redacted.

No action has been taken against Wildeman. Should he have been suspended, the DA would hold a majority.

Lobese was removed as mayor in April 2021 in a rare unanimous vote by council. He continued as a proportional representative councillor until he was suspended by council on Tuesday 8 June, the last time the full council sat.

The Daily Dispatch reported his suspension to be in connection with maladministration allegations related to abuse of grant funding and the hiring of bodyguards at R120,000 per month while mayor.

A new mayor was not elected as Speaker Wildeman does not have a deciding vote on issues of such import. The council has therefore limped along with former deputy mayor Gcabayi fulfilling the position of acting mayor.

According to Swart, municipal regulations require the appointment of a mayor and the High Court ordered council to sit on 9 July and decide the matter. But two days before the sitting, the ANC caucus approached the High Court seeking leave to appeal the court order. As at 7 September the judge had still not made a decision on the ANC’s request, with the result that council has not sat for three months.

Swart gave this as the reason the DA did not attend a special council meeting called by Gcabayi for 20 August to decide whether to proceed with an investigation and disciplinary hearings against municipal manager Lonwabo Ngoqo and director of community services Thozamile Sompani, whom Gcabayi had placed on special leave on 12 August.

Due to the DA’s absence, Gcabayi had to reinstate Ngoqo and Sompani, who Gcabayi said faced “serious allegations of misconduct in the Qolweni Housing Project”, which has been at the centre of long-standing protests resulting in intermittent blocking of the N2. 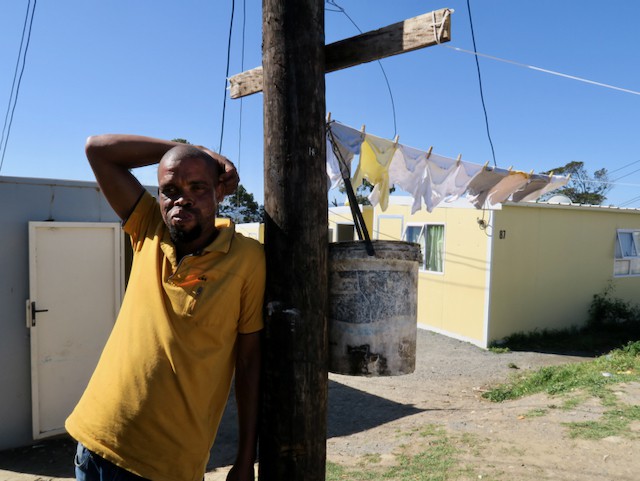 Zama Billie sells cooked liver and meat on the side of the road in a temporary relocation area next to Plettenberg Bay’s industrial area. He was relocated there with about 80 other households after a series of shack fires destroyed scores of homes in Qolweni informal settlement late last year and early this year. The temporary relocation area also accommodates families whose shacks have been removed to make way for a new housing project in Qolweni.

It would appear Gcabayi was acting in the interest of clean governance by attempting to oust the municipal manager and director of community services.

A February statement by Bredell’s office welcomed a judgment by the Labour Appeal Court finding Ngoqo had been irregularly appointed and received an irregular payment of R781,184 in February 2019.

Bredell noted Ngoqo had been appointed under former mayor Lobese in 2019, despite having been dismissed from the municipality in 2012 after being found guilty of financial misconduct. The Labour Appeal Court judgment came following Bredell instituting a legal challenge against Ngoqo’s appointment.

Ngoqo, along with director of community services Thozamile Sompani, is named in an affidavit filed in the Western Cape High Court in July as being part of a syndicate attempting to extract money from the appointed Qolweni housing contractor. The affidavit was deposed by Dr Anele Hammond, of Hammond & Hammond Incorporated representing the housing contractor, Ukhana Projects. Calls to Hammond & Hammond’s listed number went unanswered.

Ngoqo and Sompani have denied any wrongdoing. However, Herron says Gcabayi and Lobese are also named in the affidavit as part of the “syndicate who demanded an R700,000 sweetener plus a monthly kickback linked to payments made against certificates of completion”.

Questioned on the Qolweni housing project, Gcabayi claimed Ukhana was bankrupt when it was awarded the Qolweni housing tender on 30 November 2020. This was despite the company having “done good work previously” and having received accolades from the province.

But the difficulties involved in moving households out of the informal settlement and into temporary accommodation in order to build on the site created delays, and a “consultant” checked whether the company was fulfilling its contractual obligations, together with complaints from the community, led to Ukhana being removed from the project.

“When you are a company you get punished for not doing certain things,” Gcabayi said.

He said it was subsequently discovered Ukhana had ceded its rights to the Qolweni project to Hammond and Hammond Transactional Law Clinic, a non-profit organisation.

“Subsequent to that, the allegations started in December, when we saw the emails the lady writing to the mayor’s office reporting that the officials need, soliciting monies blah blah blah and so on.”

He said this was why he attempted to suspend Ngoqo and Sompani, making no mention of his own name apparently appearing in Hammond’s affidavit.

The case has since been withdrawn from the High Court, apparently because Hammond & Hammond lacked the right to bring the case since the contract was between the municipality and Ukhana. 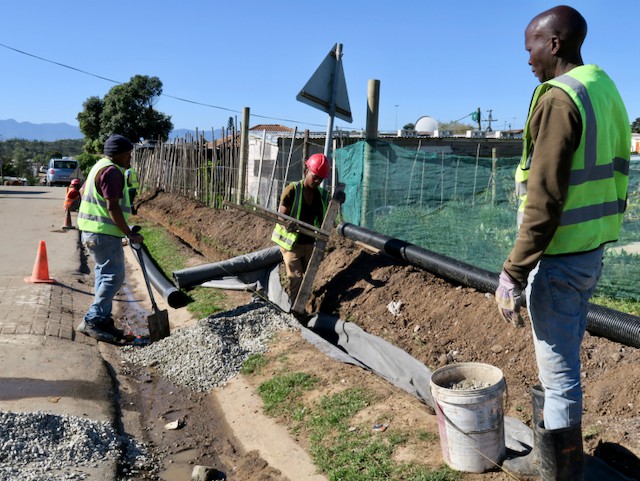 Despite the Bitou municipal council being wracked by fighting between equally weighted ANC and DA constituencies, maintenance and upgrades such as the installation of a new water pipeline in the Kwanokuthula township manage to carry on.

Despite the political impasse, litigation and appeals, Bitou maintains the appearance of a well-run administration. Other than the usual litter and illegal dumping in the 500-household Qolweni informal settlement and on the poorer streets of the former coloured township, Kranshoek, the streets and verges within the municipality are clean. This includes the main township of Kwanokuthula.

The roads, with a few exceptions, are well maintained, and the main waste collection facility appears efficient and clean. Bitou may also be the only municipality in South Africa to consistently score above 99% for the quality of effluent discharged from its waste water treatment works, of which it has two.

“Politics will play politics in council but … administration is doing their job, nothing hinders them,” said Gcabayi.

But for how long the current administration can continue remains to be seen. 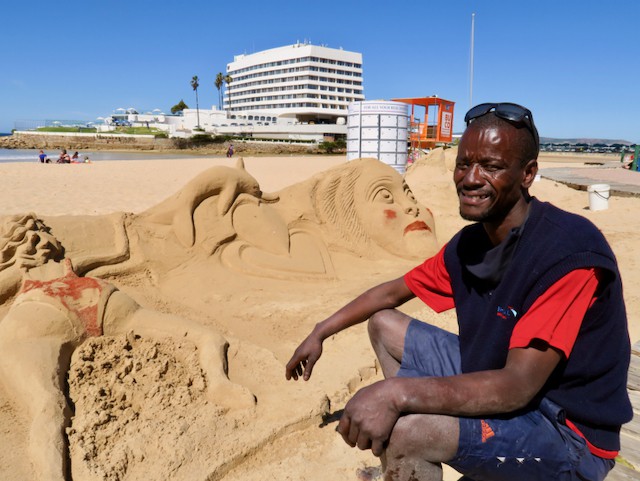 Lawrence Njajula supports his wife and child by busking as a sand artist on Plettenberg Bay’s main beach beside the Beacon Isle Hotel. Njajula, who came to Plettenberg Bay from King William’s Town ten years ago, lives in Qolweni informal settlement and hopes to live in a formal house as soon as he is on the housing list for state-subsidised homes.

The relatively functional administration is somewhat borne out by the Auditor-General’s reports. Bitou received an unqualified audit with no findings in the 2015/16 financial year, and received unqualified audits up to the latest reported 2019/20 audit, albeit with an Emphasis of Matter.

The Auditor General’s report for the 2019/20 financial year is not yet available on the National Treasury website, but among the matters raised in the 2018/19 report was that there was at least R65.7 million in irregular expenditure, largely due to non-compliance with supply chain management policy, and R250 million in unauthorised expenditure, largely caused by non-cash transactions. Reasonable steps were not taken to prevent the irregular nor the unauthorised expenditure.

This indicates a deteriorating control of finances as in the previous financial year (2017/18), there was irregular expenditure of R16.7 million, with no reasonable preventative steps taken.

According to Swart, the financial situation has worsened in the current financial year, with the municipality dipping into its investments, pulling out R112 million so far to meet the budget. Swart says this has reduced the financial padding from being able to cover 1.5 months worth of expenditure to just over one month. 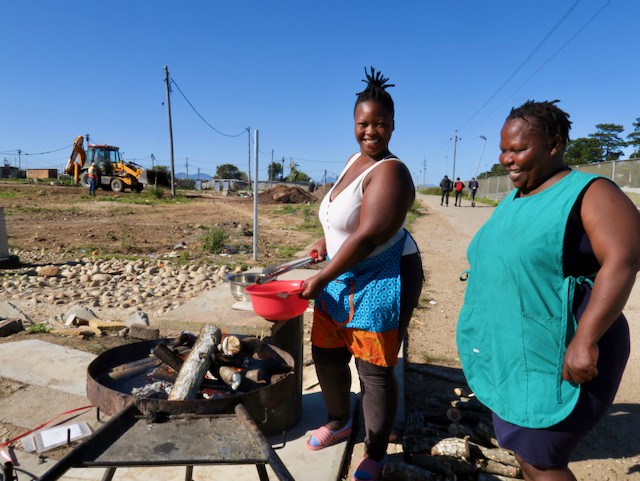 Bukeka Mhlambiso (right) and her eldest daughter, Busisiwe, prepare a fire on which to cook chicken feet and offal for workers returning to the Qolweni informal settlement, where she has been living in a large shack for the past 18 months. By selling street food, cold drinks and loose cigarettes, Mhlambiso manages to care for her four children and six nieces and nephews who were orphaned when their parents – Mhlambiso’s sister and brother-in-law – died in a car accident seven years ago. Behind her, contractors are starting the first phase of the Qolweni housing project, delays of which have resulted in protests shutting down the N2. She is looking forward to increased business when the construction workers arrive on site. “Everything is perfect. God is with me,” she said.

Patricia de Lille’s GOOD party could prove the stumbling block to the DA achieving a majority in the next election. De Lille’s Independent Democrats (ID) party took 9% of the vote when it last contested, back in 2006.

If former ID voters cast their ballot for GOOD, a coalition between GOOD and the DA may be on the cards for Bitou for the next five years. 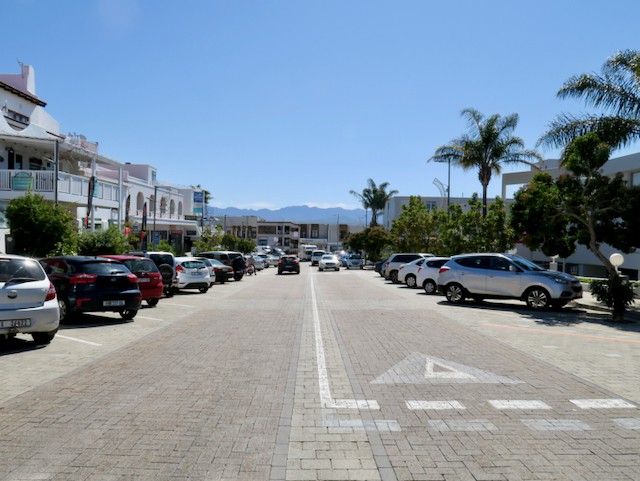 The well-maintained main street of Plettenberg Bay belies the political power struggles occurring in the municipality.

Previous:  Not such a dirty business: Two Diepsloot entrepreneurs create jobs from rubbish

Bus transformed into mobile classroom for learners in Langa