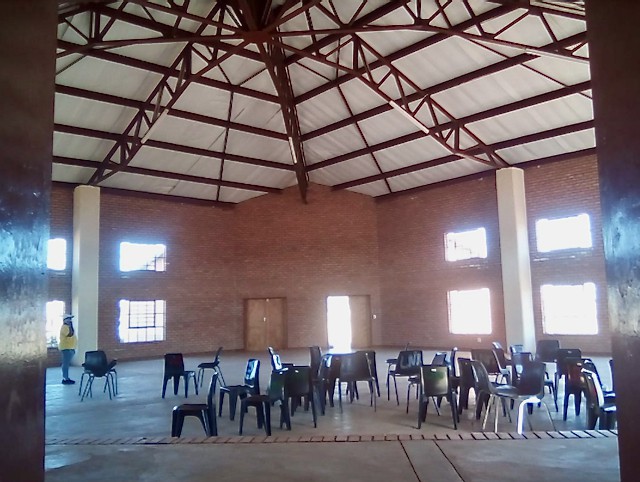 Inside the main centre of the Makweng community hall which is almost never used. Photos: Ezekiel Kekana

“What are we supposed to do with a useless hall, when we have no tap water or roads in our village?” asks David Ledwaba, a resident of Zebediela in Limpopo province.

Villagers say they woke up in 2016 to find a multi-million rand community hall being constructed in Makweng, an impoverished part of Zebediela, without the municipality properly consulting them.

“We just started seeing people building the hall. We were told – while they were building – that this ‘will be a community hall for the people of Makweng village’,” says Ledwaba.

“Our community is one of the most forgotten and underserviced villages in Zebediela,” he says. “They [government] could have built us a clinic or even given us water, because we have no water, clinics or roads here.”

Zebediela is in ward 7 of the Lepelle-Nkumpi Local Municipality in the Capricorn district and situated south of Polokwane, less than 30km from Lebowakgomo, home of the municipal legislature.

The hall is always locked, seldom used or cleaned, and has become dilapidated. Its exterior doors are supported by bricks. The four “restrooms” are in a state of disarray. There is no running water.

“The hall is normally used for funeral services and sometimes the [ANC] comrades used it, but it is just once in a while … It can go almost six months closed,” says Ledwaba.

In both the municipality’s latest Integrated Development Plan (IDP) for 2021–26 and its previous IDP (2016–21), roads, stormwater systems and water supply were set as top priority needs for Makweng.

Quoting Statistics South Africa, Lepelle-Nkumpi municipality says it had 234,000 people and 61,305 households in 2016.

In Makweng, over 90% of households use pit latrines and most do not have tap water. Over 18% of households had an income of less than R4,800; 30% had below R9,600 in 2011. Residents buy water from people who have boreholes, and when there are family gatherings, such as funerals and weddings, they liaise with the local councillor for Capricorn District Municipality to deliver water by tanker to them.

A similar situation exists in neighbouring villages, such as Ga-Mphahlele, also Rafiri, Mogoto, Rakgoatha, Bohlalakgomo, Madisha Ditoro, Magatle, Mathibela, and Ledwaba, all among the poorest areas of Zebediela. The villages are without piped water and sanitation, roads or stormwater drains, but they all boast multi-million-rand halls.

Community halls are low on the IDP priority list and villagers are wondering why these were then prioritised instead of the millions of rands going towards urgently needed basic services.

In the 2012/13 financial year, the municipality spent R7.2 million to build two halls in the villages of Rafiri and Mogoto.

Then in the 2016/17 financial year, it built another four halls. There is no entry for the cost of the Makweng hall in the IDP, but the Madisha and Rakgoatha halls each show a cost of R4.4 million. The Bohlalakgomo hall shows a cost of R1.6 million in the IDP, but there is another R4.6 million reflected in the financial tender bids awarded in 2016/17, which also reflects another R4.4 million for a hall in Madisha Ditoro.

The halls were built by different contractors but have the same design.

In the 2017/18 financial year, the municipality built community halls in Magatle and Mathibela for R4.7 million each; in Molapo for R5 million; and in Ledwaba for over R4 million.

The Makweng hall. The two doors are supported by bricks because they are falling to pieces.

Maria Maake, a quantity surveyor who looked at photos of the halls, questions the expenditure. “I strongly believe that some of the cost figures for these community halls were a bit exaggerated,” she said.

The land already belonged to the municipalities and she also points out the cheap building materials used, especially the doors.

IDPs are meant to be presented to the community in face-to-face meetings.

“The only people that you will see having meetings in that hall are the local ANC members themselves. I have never heard that this mayor or even the one before or any representative nor our councillor has called a meeting with the community to hear what we need or what the municipality can do for us,” said Makweng resident Joe Maloka.

Tumpo Thole, a local farmer who lives near the hall, said, “We have never seen anyone from Lepelle-Nkumpi municipality here to talk about our needs as farmers and community.”

Thabang Malatji, local government researcher, says that many local municipalities in Limpopo fail when consulting their constituents about projects.

“They tend to rely on private firms to get social and economic data of the households in their areas,” Malatji said. “Some of the reasons why municipalities prioritise projects that are not urgent include: one, a lack of understanding of how development processes work; two, not consulting with the communities about their urgent needs; and three, officials who do not have the will and desire to enhance developments in the communities they serve.”

Makweng Ward 7 Councillor Francina Nkuna (ANC) admitted that the community hall is not fully operational or utilised. She said the Covid pandemic has further halted any form of activities at the hall.

Nkuna was elected after the hall decision was taken and says she cannot comment on “whether the hall was built with the full consultation with the community or not”.

“The halls serve no purpose for the people of Lepelle and we do not support this project of [building] community halls, ” says Itumeleng Ratau, the EFF leader in Lepelle-Nkumpi local municipality council.

“They lie that they will make revenue out of these halls by hosting birthdays and weddings. Tell me, how many people you know have their weddings in a community hall in our area? … We need to turn these halls into community services … Young people need programmes which will aim to improve their lives more than just having useless halls.”

Makweng village has five sections but does not have a clinic. Private health clinic group Unjani Clinic says it has long requested to utilise the hall to provide health services for the poorest residents.

“We saw that there’s a high number of people in Makweng village who need help, and decided to take our services there,” says Mmapipi Kekana, manager of Zebediela Unjani clinic franchise.

“We approached the Kekana tribal office to assist us with a place to operate. However, they could not give us the Makweng community hall, but referred us to a SASSA hall which is very small, and far from the people. Also, there was a question of high rent, and we just could not afford to pay such.”

Makweng village has two tribal houses – Kekana and Tjale. The Kekana tribal authority has taken control of the hall and it sets the rent.

“We even offered our free services to the municipality, asking them to give us free children immunization medications, and we will administer it for free for all the children of Zebediela, but we have not even heard from the municipality to date.”

The hall is well located for this as it is close to the main road; the SASSA hall is not.

Unjani clinic is now operating in a make-shift venue at the tribal home of Ga-Tjale headman Frans Tjale.

“We do not have a clinic here, and our people travel long distances to other communities to get medical help and that pains me a lot,” said Tjale.

“I am so happy that my people also come in numbers every Friday to use Unjani services, even though they pay a little.”

Tjale said municipal officials and the ward councillor hardly ever brief him on their projects.

This reporter has tried for four months to get answers and information about the construction and uses of the halls, from the senior communication officer Mokgadi Maubane to the acting municipal manager Khomotso Mankga. They stopped answering my calls. Mayor Merriam Molala’s office acknowledged receiving the questions but did not reply.

This is well researched and might be helpful to our communities. People need basic services and I do not think that a hall is a need at the moment. You might even find that the tenders were awarded to the same companies.

We have a lot of soccer tournaments. Why don't they build proper playing grounds then if they want to have something that the youth can use? Or even build roads so that people might start businesses. If you look at areas that have tar, you'll see that small businesses emerge very soon after.