Grant is used up on basic services that should be free 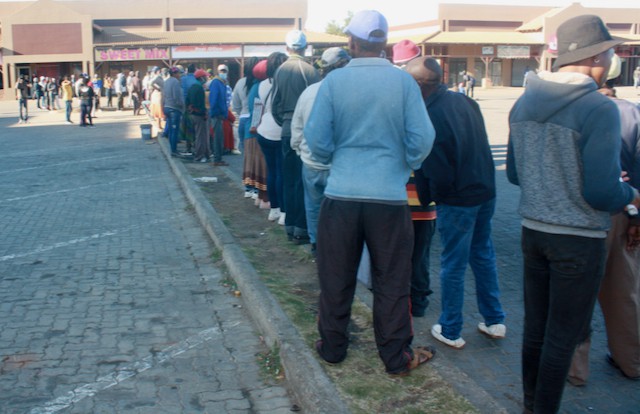 Hundreds of people queue for the R350 Covid-19 grant in May 2021 in the Eastern Cape. Archive photo: Thamsanqa Mbovane

Civil society organisations have welcomed the re-implementation of the Covid-19 R350 grant, but they say the amount is far too little and it isn’t reaching enough people who should qualify for relief.

On Tuesday the Black Sash published Social Protection in a Time of Covid - Lessons for Basic Income Support. This study looks at the efficiency of the distribution of the Covid-19 R350 Social Relief of Distress (SRD) Grant. It also looks at the systemic challenges involved, how community-based organisations tried to help people apply for the grant, and the impact of the grant on the lives of beneficiaries.

Between September and November 2020, the Black Sash conducted telephonic interviews with 26 people every month for three months. Participants included successful and unsuccessful applicants.

Grant amount not enough and too many people rejected

Dr Wanga Zembe-Mkabile, from the South African Medical Research Council, said many of the applicants said for the first time they felt “seen and cared for by the state”. However, for many low-income recipients, the grant was so small that it could only be used to pay for basic services, like water or electricity, that should be free.

Almost one-third of applications were rejected. According to the report, the most common reason was conflicting information with national government databases.

Dr Erin Torkelson of Durham University said the application system was “set up in a way that excluded people from the get-go” and that the distribution system made it difficult for successful applicants to access that money.

According to the report, the qualification criteria for the R350 grant stated that an eligible applicant should “not receive any form of income”. Many of the exclusions implicit within the grant program resulted from these criteria.

“Instead of this being like any other grant where applicants could bring proof of their income through bank statements to a SASSA office, eligibility was checked against other government databases. Most of these databases had errors and were out of date, so the majority of people were rejected because of these database checks.

For those who had qualified for the Covid-19 grant, the process of receiving payments was also not easy. In many cases, the time period between applying for the grant and receiving the grant was several months.

Applicants who had been approved for R350 grants were reassessed on a monthly basis to verify that they had no other income, by checking bank accounts associated with beneficiary ID numbers. Income of any kind would result in the automatic non-payment of the grant for that month, the report said.

“[The South African Post Office] struggled with cash shortages, which meant people were left frustrated and hungry. Across the country, there were overwhelming numbers of people queueing outside SAPO branches in the hope of collecting their grant. In many cases people camped outside SAPO branches overnight in the hope of getting to the branch before cash ran out,” the report read.

Speaking at the virtual launch of the report, Nelisiwe Xaba, paralegal fieldworker and member of the Black Sash, said government was not adequately prepared for the implementation of the R350 grant, citing that many distribution sites such as the South African Post office were overwhelmed by the number of people waiting to receive cash payments. Xaba assisted more than 400 beneficiaries.

“The grant was a good thing, but there were too many challenges in the process of drawing the grant money. Government wasn’t prepared for it, especially SASSA. They didn’t look at the capacity at SAPO branches. Most of the applicants had banking details on the system, but SASSA decided to send their payments to SAPO.”

Xaba said the distribution process of the cash payments of grants were ineffective, adding that very few Post Office collection sites had working computers. At one SAPO branch it took nearly eight months to get a second desktop, she said.

“There were extremely long queues for beneficiaries to stand. Beneficiaries were given no pay dates … So once people received the SMS that their grant had been approved they rushed to the Post Office, while the payments were not ready.”

“Some of them spent the night outside the offices while others came as early as 4am to stand in the queue. For safety reasons, especially in the townships, you can’t expect people to sleep over on verandas waiting for grants,” said Xaba.

In his address to the country on Sunday night, President Cyril Ramaphosa announced that the Covid-19 R350 grant would be reinstated and run until the end of March 2022.

Xaba said although it was announced that the grant would be reinstated, “there’s still a large number of beneficiaries who have not received grants since May 2020. Some were paid up until October 2020, some were paid from May 2020 to January 2021, but very few have received their grants in full.”

The Black Sash said that although it welcomes the reinstatement of the Covid-19 grant, it is concerning that the amount was not increased to meet the food poverty line which is currently R585 per month.

Despite its disappointment that the amount was not increased, Black Sash said it was pleased that the eligibility criteria for the R350 grant have been expanded to include unemployed caregivers who receive the Child Support Grant (CSG) on behalf of children.

Next:  Battle to stop 22km long mine on Wild Coast

Previous:  Yes, we can afford a Universal Basic Income Guarantee

Gqeberha families have been housed on land polluted by methane gas, but municipality won’t explain what’s going on

KwaMashu commuters must wait another year to catch the next train