Workers oppose the mayor’s plan to bring in a new company and cut their wages. Mayor blames the Department - but the municipality has not released funds to the contractor. 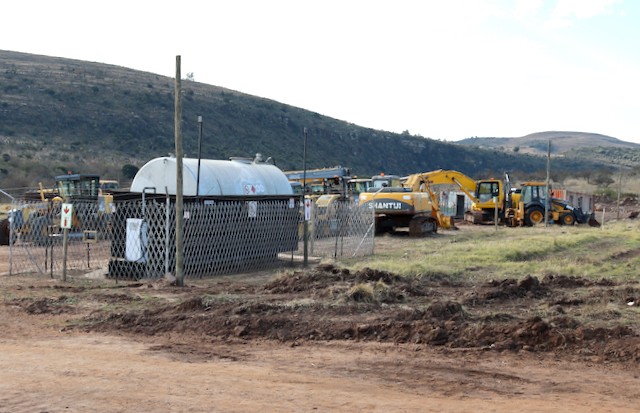 Ngqamakhwe Regional Water Scheme has the Amathole District Municipality and the Department of Water at loggerheads. Photo: Nombulelo Damba-Hendrik

Workers and some local residents in the Eastern Cape town of Tsomo are threatening protest action if Amathole District Municipality Mayor Nceba Ndikinda goes ahead with his plan to hire a new company to complete the Ngqamakhwe Regional Water Scheme.

The Amathole District Municipality gave the Department of Water and Sanitation until Friday last week to remove its machinery at the work site. On Monday the machines were still there, but work has stopped.

The Amathole mayor says the department has failed to deliver the water scheme. But the department says the municipality is to blame for not releasing funds for the project timeously.

Site establishment started in February 2021 and the work was expected to be finished in March 2022.

Back in 2020, the Department of Water and Sanitation allocated R230-million to Amathole over three years to mitigate the effects of the drought gripping the region.

The workers say work started smoothly. The scope of the work includes installing pipelines, constructing a concrete reservoir, and electrical and mechanical pump installations. The hiring of the 64 workers was fair and done by community members.

“For once it was us, community members, who were benefiting from the project. This is new in our community for the company to hire such a number of people,” said Mzuvukile Maqungu, one of the workers.

“Now we are told that we must go sleep at home and wait for whenever they hire a [new] construction company. No time-frames and no guarantees that they are going to hire all of us again,” he said.

“Most of the workers here have signed a 12-month contract with the department. They were hoping to bring a change in their homes and Amathole wants to take that away from us. We are going to fight,” said Maqungu.

But Amathole mayor Nceba Ndikinda says the department has only managed to do 10% of the work.

Ndikinda said a decision to terminate the contract was taken on 16 May. He said 14 days to contest the termination had been given but there was no response.

Ndikinda said Amathole plans to hire a private company to finish the job, however workers must expect a salary decrease. They will get the “normal rate” of R120 to R150, not the R356 a day the department is currently paying them, he said.

This did not sit well with the workers at the meeting.

“What intervention have you taken to assist this company so they can deliver? Did you think about us as people who are benefiting from this project? … Delaying the funds – was it part of the plan to terminate this contract so you can hire the contractor you want?” Maqugu asked Ndikinda, looking him straight in the eye.

Ndikinda said the decision was taken and that it is final.

Zandisile Zenani, the site manager, acknowledged the delay, but he blamed the Amathole District Municipality for delaying funds. He also said they had not contested the termination because the letter only came a month after the contract had been terminated.

Ndikinda said the contractor was supposed to have start-up capital, and should not have had to wait for funds.

He said Amathole District Municipality will advertise the tender and follow all legal procedures.

Community member Nesizwe Mthwa said, “We are told that a new private company is going to be hired and he [Ndikinda] expects us to accept that. This is not the first time this mayor bullies us … We are not going to allow him to bully us again … This company [DWS] is not leaving here and we will make sure of that.”

GroundUp has tried since last week to get official comment from the Department of Water and Sanitation.