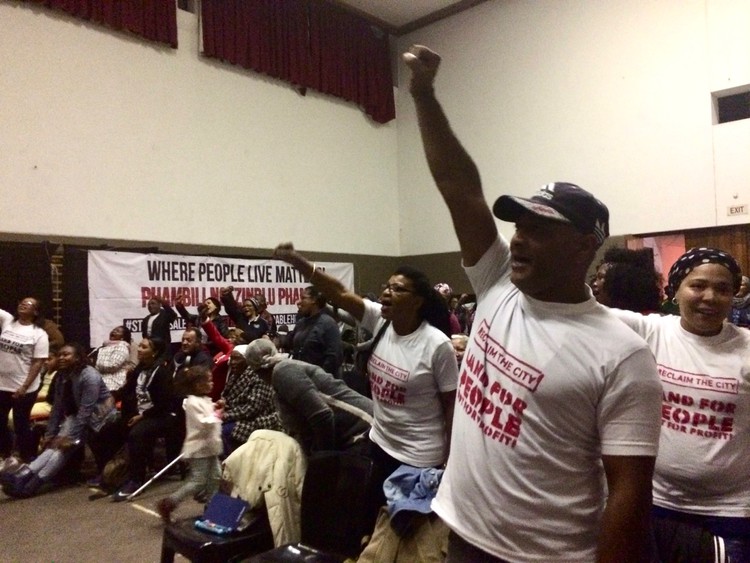 Tensions ran high at a meeting hosted by Reclaim the City (RTC) with City of Cape Town councillors Brett Herron, Suzette Little and Dave Bryant on Thursday evening. The meeting held at Queen’s Park High in Woodstock was to find a long-term solution for evictions and clarify the City’s plans for temporary relocation areas (TRAs).

On Tuesday Herron had testified in court – in a case involving evictions in Albert Road, Woodstock – that the City will no longer use Blikkiesdorp as a TRA. The City now only offers Wolwerivier for those in crisis, including evictees.

RTC and its supporters came to the meeting to say: “No to Wolwerivier”. They say it is far from schools and the workplaces of residents facing eviction in Woodstock.

RTC wants the City to create transitional accommodation and affordable housing in the city, closer to where people work.

Shaneeka Abdullah shared her eviction story at the meeting. She was forced out of her home last year in April. Her belongings were put out on the street and most were stolen. She lived in her car for three nights with her family, including her two-month-old baby, before RTC assisted her with housing. She now stays at the old Woodstock Hospital, which RTC is occupying.

Herron said the City was committed to affordable housing and there were a lot of plans happening “in the backroom”, though he could not speak about them yet. The City is currently looking at sites for transitional and social housing, including a property on Pickwick Road in Salt River, which has already been announced. Once the City has concrete plans and had secured all the properties, Herron said he would share the exact names and the locations. The intention is to have new transitional housing available by 2019.

Heron explained that the urgency of the housing crisis forced the government to build housing where it was cheap and available first, which was usually far from the city centre. As a result, government had perpetuated apartheid spatial planning, “because we put poor, mostly black residents on the outskirts of the city, just as apartheid did,” Herron said.

RTC activists vowed to continue occupying land until the City has a solution. After the Western Cape government decided to sell the old Tafelberg School property instead of building social housing in March of 2017, RTC members began the occupation of Helen Bowden Nurses Home and the Woodstock Hospital as a protest. The province has said that Helen Bowden Nurses Home and Woodstock sites would be used for social housing.

“We will continue to defend and expand our occupation of the Woodstock hospital as well as Helen Bowden Nursing Home, because this is currently the only option,” Maxine Bezuidenhout of RTC said. “Because you haven’t created the solution, we have decided to take it upon ourselves.”

The City cannot develop Tafelberg without permission because it is owned by the Western Cape Province. The City is pursuing city-owned property first, said Herron.

“I’ve worked damn hard to put some projects on the table that didn’t exist before,” Herron said. “If given the opportunity to continue doing this, I’ll work day and night.”

EDITOR’S NOTE: Because of the uncertainty surrounding the status of the Cape Town City Council, we are referring to mayoral committee members as councillors until the controversy is resolved.

CORRECTION: The paragraph starting “Herron said the City was committed” has been corrected to include transitional housing.