Shack owner sent away after boy is electrocuted by izinyoka connection 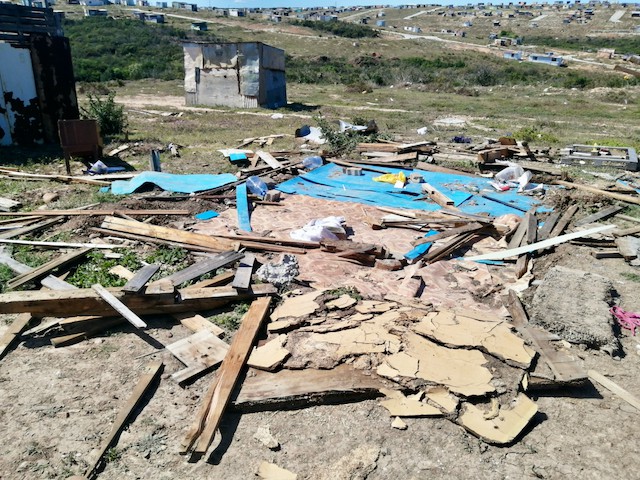 Residents told the owner of this shack to demolish it and leave the area after an uncovered electrical wire killed Chumani Mdayi in Despatch on Saturday. Photo: Mkhuseli Sizani

This follows the death of eight-year-old Chumani Mdayi who was electrocuted by open izinyoka wires in Winnie Mandela township on Saturday.

Chumani’s death sparked outrage among residents who swiftly removed all of the uncovered illegal connections in the area.

Sivuyile Magwadi, a friend of the family, said relatives had found the child lying on the footpath with an uncovered wire next to him. “We rushed him to Port Elizabeth Provincial Hospital, where he was certified dead. The owner of the shack who made that [electricity] connection came to the family on Sunday and apologised. He even promised to contribute to the funeral.”

Winnie Mandela settlement was established about three years ago and is built on municipal serviced sites.

Community leader Thembeka Lukwe said Chumani’s death could have been avoided had the municipality had provided services to the 300 shacks in the area.

“The first time we arrived here we asked for electricity but our municipality failed to do that for us. Then we decided to ask RDP homeowners of [neighbouring] Nkandla and Kings Town to allow us to do illegal connections from their homes. We agreed that all our connections should be done with covered cables to protect ourselves, children and animals against electrocution. Each person pays R200 or R300 to the house owner,” she said.

Lukwe said the community decided to ask the man who claimed responsibility for the illegal connection to demolish his shack and leave the area. “We made these connections to get electricity, not kill people and animals,” she said.

She said water and toilets were also a major challenge for them. The municipality installed eight standpipes without taps in May 2020. “When we open them, water spreads out and gets wasted. To relieve ourselves we use the bushes and empty paint buckets,” she said.

On Tuesday, Mzoxolo Desha from Ward 41 joined the delegation at the office of Mayco member for Infrastructure, engineering and energy Mongameli Bobani to demand that all the informal settlements receive water, electricity and toilets. “We cannot keep fighting over service delivery. Endlovini shack dwellers are still waiting for electricity and de-densification of their shacks. This was promised when they clashed with Nkandla’s RDP homeowners over illegal connections,” he said.

In response to several questions, Nelson Mandela Bay Metropolitan Municipality spokesperson Mamela Ndamase said: “The Electricity and Energy Directorate is aware of the illegal electricity connections within the metro, mainly in areas with informal housing. There will be an investigation into the death of this boy.”

At the time of publication, the group were still waiting at City Hall to speak to a municipal official.