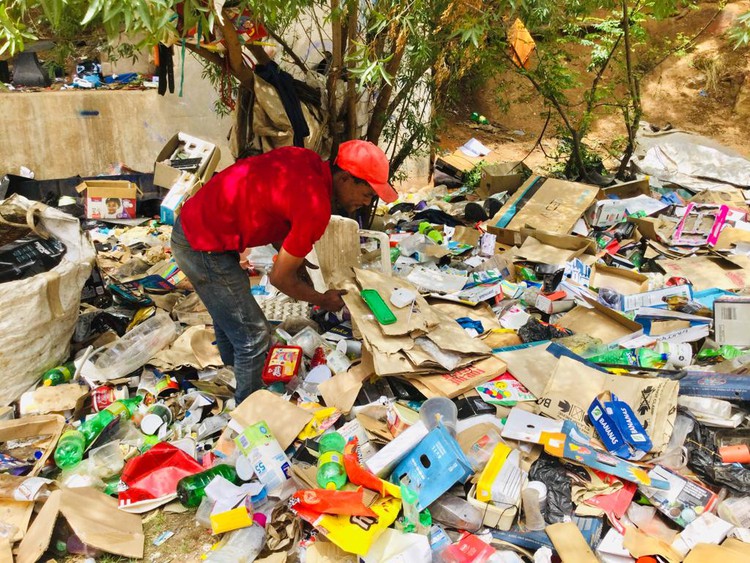 Olwethu Ntamo, a 35-year-old waste picker, sorts through his materials on the on a field in Farrar Park, Boksburg where residents are complaining about informal miners and illegal dumpers. Photo: Kimberly Mutandiro

Residents living near a vacant field belonging to the DRD Gold Mine in Farrar Park, Boksburg say it has become a dump site crawling with informal miners and illegal dumpers.

Residents say their pleas for help from the City of Ekurhuleni and DRD Gold Mine have gone unanswered. They say security guards at the mine do very little to secure the property.

“Our community used to be our pride and joy,” says Antoinette van Zyl, a resident of Farrar Park. Van Zyl said the field was more than just an eyesore for residents of the mostly middle class suburb. Pointing out a river along the field which has become polluted and has a bad smell, Van Zyl said this had been “a perfect outdoor leisure area” for residents.

She said that over time, illegal dumpings, criminals and informal miners had begun operating in the area.

“The local river in the woods where folks used to fish, picnic, have a yacht club and Boy Scouts has become polluted. Now all we smell is sewage,” she said.

“Trucks drive through the field to dump filth, rubble and sewage water into the river. Our community has become infested with rats and this has posed a health risk,” she said.

Van Zyl said community members have also found a number of items on the field suspected to be linked to criminal activity like “strange weapons”. She added that informal miners were seen daily scrounging for gold while waste pickers had begun using the field to sort through waste.

Van Zyl explained that a fence had previously separated the field from their houses but it had been stolen. This, she believes, has increased incidents of theft and robbery in the area.

To date, hundreds of community members have signed a petition for the field to be fenced. They have also raised R200,000 towards the fence.

Another resident, Charlene Vorster-Ferreira, said over R1 million was needed to properly secure the field. “We do not know how that will happen if the mine and the City of Ekhurhuleni do not do not play their part,” she said.

Wanoni Clements said, “Our domestic workers have been robbed when they get paid. They are scared to walk alone. This has become a serious problem.”

While walking along the field, GroundUp found Olwethu Ntamo, a 35-year-old waste picker. He was seated in the middle of an array of colourful plastic bags, bottles and cardboard boxes scattered on the ground. He explained that his materials were often blown away but that he tried to store what he could under a nearby bridge where he sleeps at night.

Not far from Ntamo was Peter Makoni, an informal gold miner from Masvingo, Zimbabwe. He was sitting on the ground surrounded with makeshift tools and large stones which he hammered in the hope of finding gold. Makoni said he had been mining gold in the area since 2015.

“This place is full of gold,” said Makoni. He said he visited the area when it was “quiet and peaceful”.

Ward councillor Marius De Vos said that there was a waste management problem in Ekurhuleni. “The people who dump waste in the area are avoiding queues and paying at formal dumping areas. The mine should be responsible for erecting the fence and restoring order,” he said.

In response to questions, DRD Gold Mine said that it would not erect another fence because fencing had been stolen or vandalised in the past. “The cost associated with replacement or repairs becomes prohibitive.” The mine said “no dumping” signs would be placed on the field and security would be boosted to keep miners away.