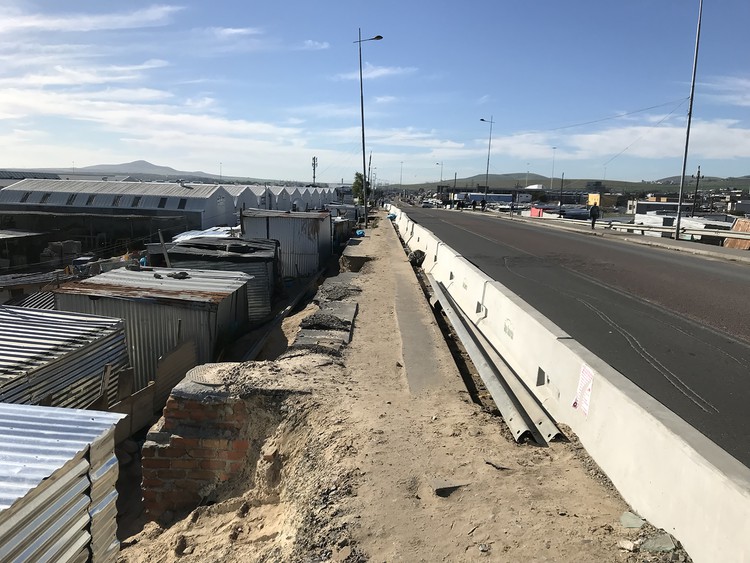 The lack of housing opportunities and land in Dunoon, Cape Town has resulted in dozens of families to dig out part of the Potsdam Road reserve near the busy business park to build their homes. Photo: Peter Luhanga

A lack of land in Dunoon, Cape Town has led to over a dozen families erecting shacks under Potsdam Road bridge and along the road opposite the Racing Park business park.

“When trucks go over the bridge it feels like an earthquake. Sometimes it’s like a dream when it shakes at night,” says Masibulele Sothuko. He has been living in a one-room shack under the bridge since 2012 with his girlfriend and their two-year-old son.

“The living conditions next to a sewage stream are bad and living under a bridge is a risk,” says Sothuko. But, he says, they have nowhere else to stay.

Despite the risk to their safety, people desperate for housing have dug out the Potsdam Road reserve to build their homes. Some have removed soil from around the bridge to elevate their shacks to prevent flooding. This has resulted in a cat and mouse game between the City of Cape Town and occupiers. The City has been placing rocks on the embankment beside the road, but residents soon after remove them to maintain thoroughfares between their shacks.

Sothuko says that without access to water and toilets, some residents have dug their own pit latrines but others still relieve themselves in the bush along the Diep River floodplain.

Municipal spokesperson Luthando Tyhalibongo said they are aware of the occupation along the road reserve. Asked about the excavation around the bridge, he said that an inspection found it to be stable, but the pavement was deemed unsafe.

“As the local district office waits for the relocation process to be addressed, pedestrians are being diverted and barriers have been placed in the road to divert traffic, creating a safer pedestrian walkway,” he said.

Mayoral Committee Member for Human Settlements Malusi Booi, said, “The City does everything in its power to prevent the unlawful occupation of land.”

He said a number of actions were taken against this group but were unsuccessful. “Unfortunately, the City cannot protect every piece of land from unlawful occupation. Those who occupy illegally and on unsuitable land do so at their own risk.”