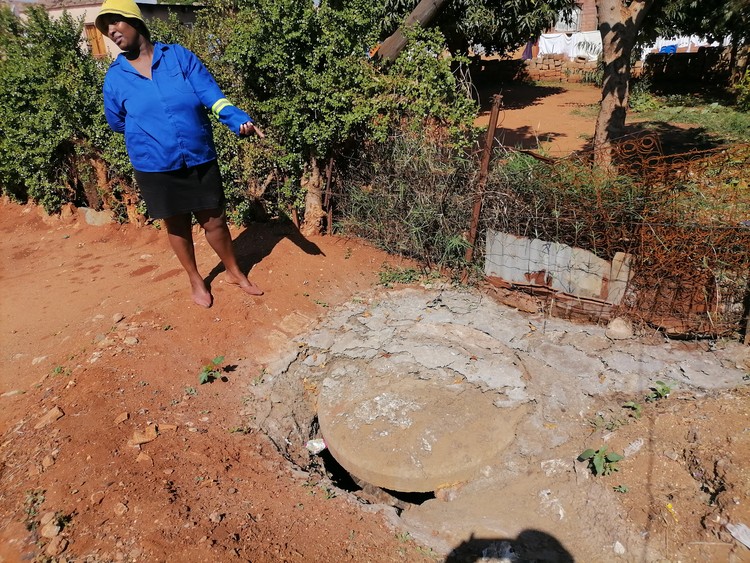 At the back of Dinah Manamela’s house are two broken sewer pipes. She says she is now used to living with the smell. Photo: Bernard Chiguvare

Residents of Mogalakwena in Limpopo have asked the Human Rights Commission (SAHRC) for help getting the municipality to fix a broken sewage system which has left sewage running in the streets.

Victor Mavhidula, Limpopo SAHRC Provincial Manager, said the Commission had visited the area towards the end of April following an approach by the Mogalakwena Concerned and Affected Communities (MCAC), a community structure. “We noted that allegations by the community were true. We gave the municipality a week to come up with a plan to address the challenges. We are busy looking into the plan,” said Mavhidula. He said the Commission would monitor the delivery of municipal services to the community.

Chairperson of MCAC Motlatso Selomo said the group had complained several times to the municipality about the broken sewer system, sewage flowing above ground and refuse not collected.

When we visited the area on 5 May there was a water outage and the municipality was fixing water pipes. No sewage was running in the street but the streets stank with dried sewage.

Maboya Tshepisho, who runs a food stall, said he had to close his business from January to April because of sewage flowing in the street. “No customer would walk on sewage to buy food,” he said. His stall is next to a doctor’s surgery.

Some residents have tried to cover the sewage with rubbish.

Dinah Manamela whose house is next to Mokopane hospital, says the municipality dug a hole trying to fix the sewer but never completed the work. “The sewage has been flowing all over my yard. We are now used to staying with the sewage and the smell,” said Manamela.

She said she would never vote because political parties had failed to meet her expectations. “I will never vote for anyone. The living conditions I and my family are subjected to have taught me not to trust anyone,” Manamela said.

In some places the constant flow of sewage has created swamps where tall grass and bushes are growing. Thou Sasa, one of the community leaders, says these areas have now become dumping grounds for rubbish.

Municipality spokesperson Malesela Selokela told GroundUp that the municipality had submitted its plan to the SAHRC. “At times we respond promptly to calls from the community but if we have several calls on a particular day it may take one or two days to attend to the sewerage.”

He said residents should not flush sanitary pads and other material into the sewage system and should not dump rubbish in illegal dumps. “We are now cleaning the illegal dumps twice a day,” he said.