Unions and organisations call for a basic income grant 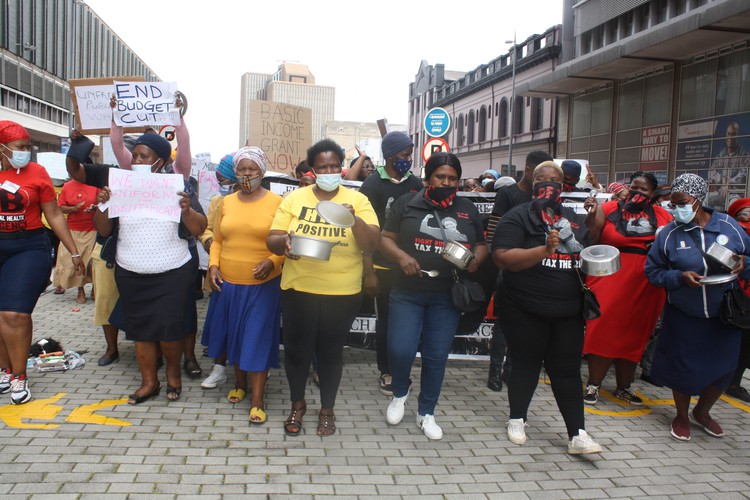 About 100 community health workers and human rights organisations marched from Nelson Mandela Bay’s Lillian Diedrick Building to the City Hall in the city centre. The demonstration was led by a coalition called Cry of the Xcluded. Photo: Thamsanqa Mbovane

Hundreds of people joined demonstrations across the country on Thursday, demanding that the rich be taxed, climate reform and for a basic income grant to be implemented.

The actions, under the coalition called Cry of the Xcluded, were held as Minister of Finance Enoch Godongwana presented the Medium Term Budget Policy Statement (MTBPS) on Thursday.

In its memorandum, Cry of the Xcluded said, “The money put aside for local government is being slashed. Even municipal workers’ multi-year increments are being denied. With even less money provided to local governments from the national government, municipalities will be forced to increase the prices of rates, water and electricity. More people will be Xcluded, service delivery will get even worse, and we get closer and closer to a climate disaster.”

In Gqeberha, about 100 health workers and human rights organisations marched from Nelson Mandela Bay’s Lillian Diedrick Building to the City Hall in the city centre. Some of their placards read, “Basic income grant now”, “End budget cuts’ and “Food for people, not for profit” while some people carried empty pots to symbolise how many families are going hungry.

Among their demands, marchers called for a basic income grant of R1,500 for 18 to 59 year-olds without a stable income as well as permanent employment for workers in public sectors like health.

Community health worker, Vuyiswa Mahlangabeza, who joined the march, said she has worked at different clinics in Motherwell since 1992. She said that their stipend of R3,500 per month is not enough to sustain their families. “We want permanent jobs now,” she said.

Mahlangabeza accused the government of exploiting community health workers by failing to employ them permanently. “We walk to several homes every week and they don’t even offer us motorbikes. At households we check people’s high-blood pressure, do HIV and other tests and refer patients to the clinic. At the clinic, they let us wash the floors because of staff shortages, instead of employing people for the job. We are all-rounders.”

While addressing the group, Siyabulela Mama from Cry of the Xcluded said, “Every week, about ten million people go to bed hungry. Out of these, three million are children. We are here to say that when [Minister Godongwana] delivers his speech, he must stop budget cuts. He must tax the rich.” 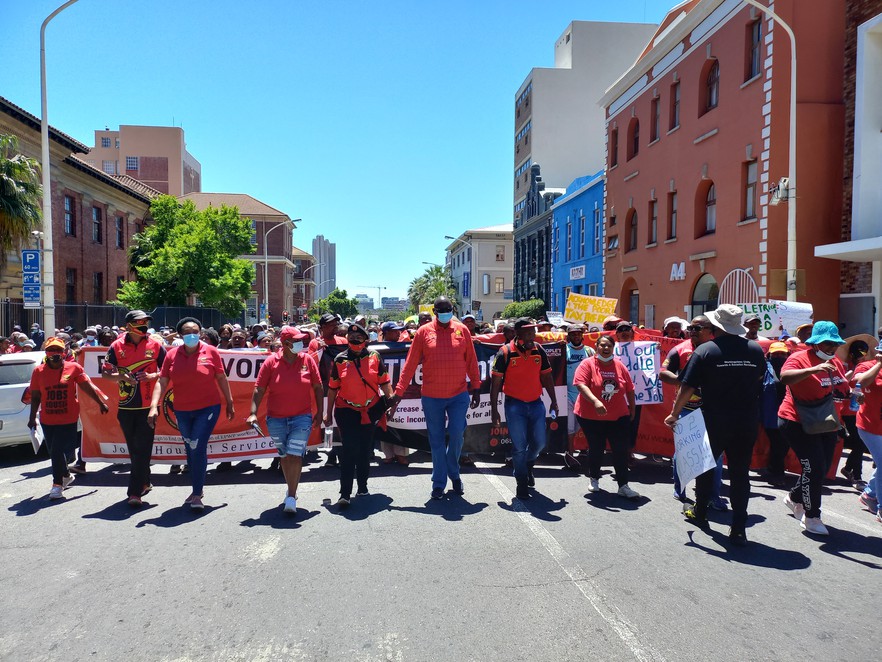 More than 100 members from multiple civil society organisations and labour unions march to Parliament on Thursday ahead of the Mid Term Budget Policy Statement. They are demanding a Basic Income Grant of R1,500 among other things. Photo: Marecia Damons

In Cape Town, a large group marched from the Commission for Conciliation, Mediation and Arbitration (CCMA) building to Parliament before heading to the Civic Centre. They demanded the implementation of the multi-year wage increase agreement, a moratorium on disciplinary hearings due to alleged inconsistencies. They also want the City of Cape Town to fill 10,000 permanent “lower-level” vacancies and to insource contracted workers, among other things.

Outside the CCMA, the group handed over a memorandum of demands to Senior Commissioner Vusumzi Landu who promised to respond to some of the demands by Monday.

At Parliament, Chulumanco Nkasela from Fight Inequality said, “We need a budget that works for the people, the unemployed, the poor and the destitute in this country. Not a budget that further enriches those who are already rich.”

Nkasela said they want the budget to include better provisions for the Department of Basic and Higher Education and Training. “The deadlines for the Minimum Norms and Standards of school infrastructure have been missed since 2013. It’s clearly a struggle. We still have learners drowning in pit latrines, studying and learning under trees and in mud classrooms. With higher education, students need to be better funded. A people’s budget would address those issues.”

Outside of Parliament the memorandum was signed by Deputy Director-General of Corporate Services, Stadi Mngomezulu, who said he would pass it on to Minister Godongwana.

Members of the Black Sash and other organisations picket outside outside Parliament on Thursday, calling for the Covid-19 Social Relief of Distress (SRD) grant be increased. Photo: Ashraf Hendricks

In a separate picket outside Parliament, 20 members of civil society organisations including the Black Sash held up placards, demanding that the Covid-19 Social Relief of Distress (SRD) grant be increased from R350 to be in line with the current Food Poverty Line which stands at R624 per person per month.

Hoodah Abrahams-Fayker, National Advocacy Manager at the Black Sash, said that along with the Covid grant increase, they also wanted the administrative challenges at the South African Social Security Agency (SASSA) to be addressed. This included fixing outdated databases, which have excluded some beneficiaries from receiving the SRD grant, she said.

Amanda Mamase of Girls Potential Unlimited said, “People lost their jobs [during the pandemic] and are battling to find work.” She said that the R350 was not even enough to buy a basic food basket of mieliepap, flour, sugar, and oil.