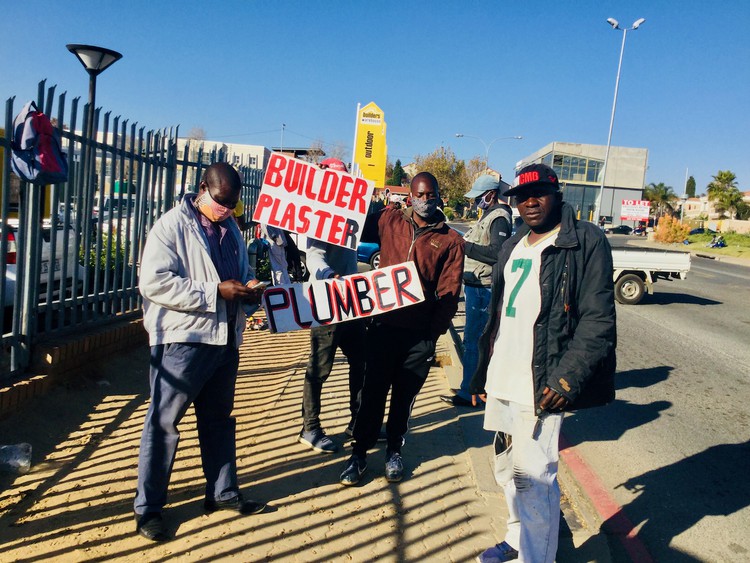 Tradesmen who wait for work outside Builders Warehouse in Fourways say they can’t get work because they are chased away by metro cops. Photo: Kimberly Mutandiro

Dozens of tradesmen, mostly immigrants, who survive by finding work outside Builders Warehouse in Fourways, say Johannesburg Metro Police (JMPD) are stopping them from getting jobs. They say the police run operations daily to chase them away.

The tradesmen flee when they see the metro cops and then reappear when the police leave.

The job seekers said life has been very difficult because of the Covid-19 pandemic. During the lockdown, when the warehouse was closed, they stayed home. Since level four started they have returned.

“What wrong have we done? We are only trying to feed our families. During lockdown only South African citizens were given food parcels. What do we feed our families?” asked Raphael Tatenda.

He said his back still aches from when he was shot by metro police with rubber bullets a week and a half ago.

“We are being treated as if we are not human beings. This is how most of us have looked after our families for many years. Some have been sourcing work here for more than ten years,” said Herbert Mhonda.

He said his electric tools were confiscated by metro police and he was pepper-sprayed.

Builders Warehouse told GroundUp that its management did not have any dealings with metro police and that police operations had nothing to do with them.

Patrick Mazarira, a welder, said, “We are being deprived of our right to make a living and it’s unfair. When we get customers we buy our equipment inside the warehouse. When we buy inside the warehouse they don’t chase us away. So is it that only our money is good enough for them?”

Mazarira said his tools had also been confiscated by metro police and after he bought new tools at the warehouse they were again confiscated.

“I have been supporting Builders Warehouse for years and this is the thank you that I get. We provide convenience to their customers who come and buy building equipment. Most customers hire their handyman from us.”

Maria Hlongwane is one of several women who also wait nearby seeking domestic work. “Metro police have been chasing us around the street. They do not care that we are women,” she said.

Hlongwane, who lives in Diepsloot, said, “Last week a car came by and tried to pick me up, but metro started chasing us and the employer was left with no choice but to leave.”

Public Relations Officer for JMPD, Wayne Minnaar, said, ”JMPD does not terrorise anyone. Our focus is to serve and protect the community. If the job seekers are contravening Covid-19 regulations by standing in crowds they will be told to move, otherwise they will face the consequences of the law.”

Communications officer for Builders Stores Asanda Nkomo said, “Many of our stores attract job seekers who are positioned outside our store properties. We appreciate that this is an opportunity for tradesmen and women to procure work from our customers as they come into and leave our parking areas.”

She said they had received complaints from customers who “felt threatened by job seekers”.

“We have not been involved in any acts of discrimination and/or harassment against the job seekers outside our stores.”