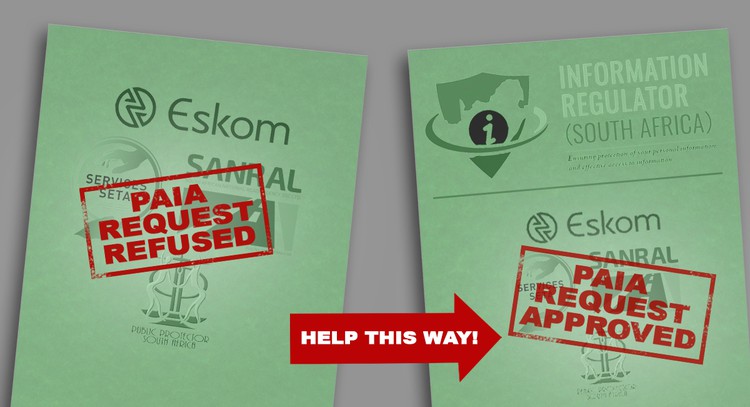 The South African National Roads Agency (SANRAL) won’t release information on the 30-year contracts with toll road concessionaires showing their profits. The Services Sector Education and Training Authority (SETA) won’t release information on a R162-million contract that profited from learners. The Public Protector refused to explain how she exonerated David Mabuza in her report on luxury cars for his Premier’s Office.

All these are requests that the Organisation Undoing Tax Abuse (OUTA) has made under the Promotion of Access to Information Act (PAIA), which should have resulted in the information being provided within weeks.

Instead, these requests have taken months or even years, and OUTA had to file expensive legal action. The SANRAL PAIA request was made in 2019 but will only be heard in court next year; the Services SETA case is awaiting judgment. OUTA won the Public Protector case but is waiting for the information.

Yet now civil society and the public have a cheaper and more effective tool to get information from recalcitrant government departments: the Information Regulator (IR) and its power to enforce PAIA requests.

The PAIA law was supposed to be the tool enabling transparency. An activist, journalist or member of the public should be able to fill in a standard form asking for specific information, submit it, and get the information within 30 days or, if it is difficult to compile, within 60 days.

Instead, officials stonewall. Individuals give up. Civil society resorts to expensive litigation, against opponents with unlimited resources. Departments and most municipalities ignore South African Human Rights Commission (SAHRC) requests for PAIA data. Even Parliament ignores the SAHRC’s complaints about these entities.

The unfortunate scenario created is that transparency is only obtainable if you have the appetite and money to fight for it in court.

This makes a mockery of UNESCO’s International Day for Universal Access to Information, celebrated on Tuesday, 28 September.

The SAHRC’s 2019/20 report on PAIA saw “the worst levels of compliance witnessed in years”, with refusal to cooperate across government but particularly “rampant non-compliance” by municipalities.

The SAHRC says there isn’t the political will to cultivate the free flow of information.

PAIA has enabled some important victories for civil society and individuals, but there have been too many defeats. PAIA has let South Africa down.

There’s new hope now that the Information Regulator (IR) could become an enforcer of transparency.

The IR was set up in terms of the Protection of Personal Information Act (POPIA) of 2013, which came into full effect in July 2021.

While much of the focus has been on the IR’s role in protecting information, it also has a crucial role in access to information, as the IR now takes over certain PAIA functions from the SAHRC.

The IR can make regulations to improve PAIA and its procedures, and help the public succeed in PAIA requests. The SAHRC was supposed to do this, but lacked the tenacity, and its failure is perhaps the main reason for its substitution with the IR.

PAIA’s newly enhanced section 77 provides for those who have been refused PAIA requests and lost internal appeals to get help from the IR before resorting to litigation. The IR must help the complainant write the complaint if needed, investigate it and, if the complaint is reasonable, intervene, which may include an enforcement order. Failure to comply with an order may result in a fine, imprisonment up to three years, or both.

The IR is exactly what the pursuit of accountability needs: an independent body to adjudicate on a PAIA refusal before a party reverts to the courts.

On Monday, OUTA filed a PAIA application with Eskom, asking for information on the programme extending the life of the Koeberg nuclear power station, which has been quietly underway since 2014 without the legally required regulatory approval. This time, if we don’t get the information we’re asking for, we’ll go to the IR for help.

PAIA is not only the tool giving effect to the right of access to information, but it is the tool that provides the public and civil society with the means to ensure transparency. PAIA itself will not arrest a municipal official or stop a dodgy tender. Rather, PAIA empowers the requester of information to do that.

Transparency can only be enforced if it is sought in the first place. Seeking transparency and holding the government to account based on the answers you receive, is being an active citizen.

Enforcing transparency will help overcome South Africa’s culture of secrecy, and enable civil society and the public to push for the government accountability we need.