Pothole of gold at the end of the rainbow 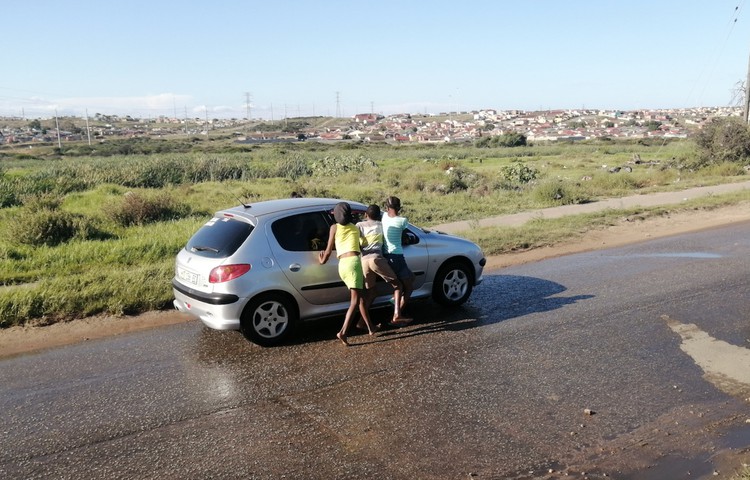 After having guided a motorist through potholed Old Uitenhage Road, children ask motorists for a fee. Photo: Mkhuseli Sizani

A flooded street where motorists cannot see hidden potholes has become a source of income for some enterprising children in Bethelsdorp, Port Elizabeth. Their parents aren’t too pleased.

The group of children, aged between five and 18, some barefoot, some in gumboots, are out from 7am until sunset directing vehicles to avoid deep potholes on the Old Uitenhage Road.

The road from Missionvale to Khayamnandi, Despatch, is one of the busiest roads and used by taxis, buses and motorists headed to Uitenhage industrial area.

“I have no control over my children as long as that pothole remains … Three of my children are playing in that dirty water,” Henry Booysen told GroundUp.

“The motorists give them money for directing their vehicles. Sometimes they come home with R50 and R100, and that is what attracts them,” said Booysen.

“They use that money to buy chips and sweets. I am unemployed and I don’t have money to give them, so that they can stop what they are doing. But when they come back home I wash them with methylated spirit and jik to protect them,” he said.

Motorists Relton Daniels, who uses the road daily, said, “Motorists are encouraging these children to keep on doing this by giving them money. They have been doing it since last year. Their number is increasing every month.”

Ward 37 Councillor Georgina Faltdman (DA) said, “I do have a budget in my ward to fix that pothole. But my main problem is the leakages [which cause and enlarge the potholes]. I have asked several times the directors from the infrastructure department to fix these leakages, but nothing has been done.”

“I constantly go there and speak to those children … I even ask for their home addresses to talk to their parents but they give me wrong addresses and names,” she said.

“I have asked the water and sanitation directors to fix the leakages. In the entire metro we need R6.5 billion to fix and build new roads. I also asked the Provincial Department of Roads and Transport and private sector to come on board and fix Old Uitenhage Road,” she said.

Municipal spokesperson Mthubanzi Mniki did not respond to our questions.