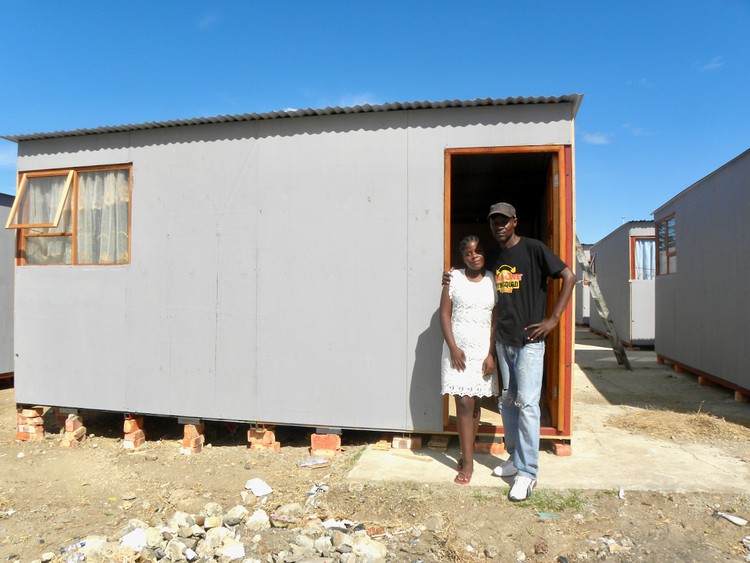 Siyabulela Arosi and his daughter, Zihle, standing in front of their temporary home in Kwazakele. Photo: Joseph Chirume

For the past four months survivors of a fire in December in Ndulwini informal settlement have been staying at the Cripple Care Community hall in Kwazakele, Port Elizabeth. Now they are being relocated to relieve congestion in the hall as a protection measure against the spread of Covid-19.

Since last week, the Nelson Mandela Bay Municipality has moved 90 people to 26 temporary shelters on an open space near Inkqubela Primary school in the same area.

But homeowners living nearby are unhappy.

“Local residents don’t want us here. They accuse us of occupying their children’s playground … Some of the homeowners boast openly that they will burn our mobile houses at night while we are asleep,” said one resettled resident. She refused to give her name.

She said the tap they were using at the school had been removed by someone. “There is no more ubuntu. It died with Mandela. We are no longer a rainbow nation. We have suffered enough in the hall and now they want to finish us off here,” she said.

The relocated residents are still struggling with the aftermath of the fire.

Nomvula Nyaniso said she lost all her belongings. “The fire destroyed furniture and other belongings worth more than R30,000. We lost our valuable documents and we are struggling to get new identity documents.”

Siyabulela Arosi, who was staying in the hall and who also lost his identity card in the blaze, said: “Home Affairs promised to fast track the issuing of our documents but nothing has happened … .”

His daughter, Sihle, said she does not sleep well at night, afraid their homes will be set alight by the hostile residents.

Ward 19 Councillor Gamalihleli Maqula (ANC) said, “We engaged the residents and assured them that these people are only there on a temporary basis. They will be moved soon to Motherwell after we finish installing water and sanitation equipment there.”

The councillor said security guards will be provided.