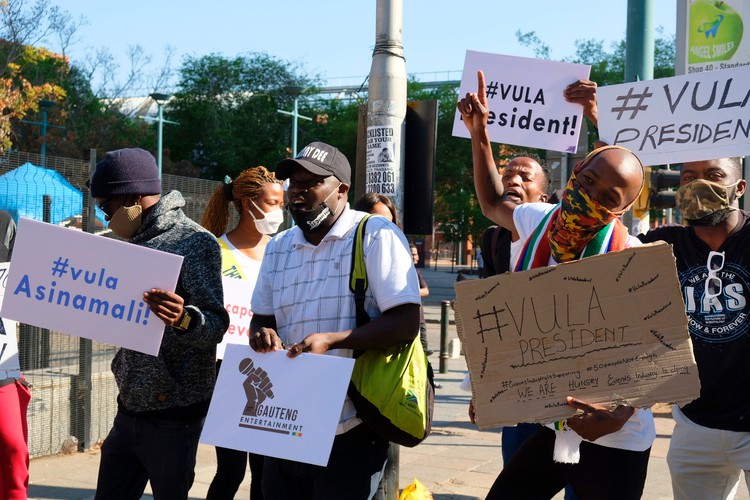 A small group of people in the entertainment industry protested outside the Union Buildings on Friday. Photo: Elna Schütz

Musicians, DJs and artists in Gauteng are asking the president to reopen the entertainment industry to save their livelihoods. A group of about 15 entertainers marched to the Union Buildings in Pretoria on Friday under the banner #VulaPresident.

Their primary demand is that events should be allowed to take place with at least 70% capacity. Event organiser, radio presenter and event MC Percy Sleash said, “All the pubs, all the taverns where people go to have fun — those places are open. But we are not allowed to host events. So they might as well open up for us.”

Secondly, the group wants clarity about how Covid-19 relief grants have been allocated to artists across the country. “Not many of us got the relief funds,” Sleash said.

The Department of Sports, Arts, and Culture is currently in its second round of accepting applications for these grants, with R65.7 million spent during the first wave.

One of the musicians marching, Leon Lee, applied for funds and was rejected. He said he and his fellow artists have suffered. “There’s no food anymore … There’s no income.”

Lee said he would be open to adjusting events to adhere to Covid-19 safety regulations, such as sanitising hands and wearing masks. He suggested attendees be kept apart in small groups by barricades.

Event MC Patrick Gubayi was also marching. He said not only artists are affected by the industry restrictions. Many supporting roles such as sound engineers, photographers and security guards also profit from events.

Gubayi said: “We know things are tough in South Africa, but we’re just asking you, Mr President: Just open the events, and make sure that at least we get 70% capacity.”

The march was affiliated with other actions under the #VulaPresident hashtag. Protesters blocked the N3 highway in Durban on 2 September under the same banner. Police reportedly used stun grenades and rubber bullets and arrested about 30 people.

Sleash said that the KwaZulu-Natal group was able to advise them on how to hold the protest peacefully and safely. The Gauteng group also has an online petition to further their cause.