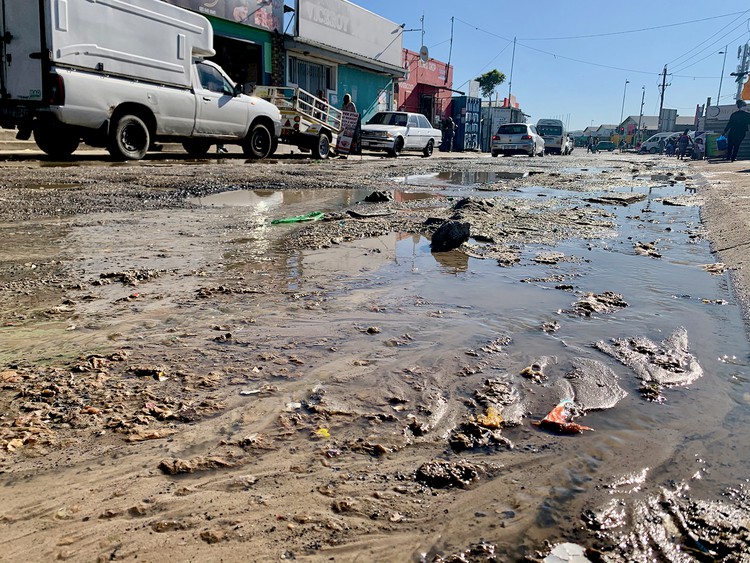 Dumani Road in Dunoon next to the taxi rank is marred with potholes filled with sewage. Photo: Peter Luhanga

Residents in Dunoon, Cape Town, have resorted to building concrete channels to direct the overflowing sewage filling its potholed roads into stormwater drains.

Dumani Road at the Dunoon Taxi Rank, where the City is constructing a multi-million-rand transport interchange, is particularly bad. Vendors braai meat next to mounds of uncollected refuse. Customers step over pools of raw sewage.

“In rural areas we have gravel roads that are much better than our roads in Dunoon,” says community leader Vusi Gajana. “There is sewage all over the place. It’s a mess. Manhole covers are missing everywhere.”

Felicity Purchase, Mayco Member for Transport, says the City was supposed to start resurfacing eight of the busiest roads (Nkunkwana, Thandabantu, Dumani, Nonzamo, and Usasaza roads, Siyabonga and Ngena streets and Denneboom Avenue) but ongoing violence, intimidation, and threats to demolish equipment has stopped the contract.

She said MyCiTi buses were torched at Potsdam Road and at the Omuramba station, and the construction of the new minibus-taxi facility at the Dunoon Taxi Rank has been disrupted time and time again by “thugs going on site and threatening the contractor”.

Gajana said this is no excuse. “The protest occurred two weeks ago and the roads’ conditions have been deteriorating for a long time … They never repair them,” he said.

Purchase said, “The project [at a cost of nearly R2 million] will commence once the area is calm and it is safe for the contractor and workers to be on site.”