A community that has built its own preschool needs government support 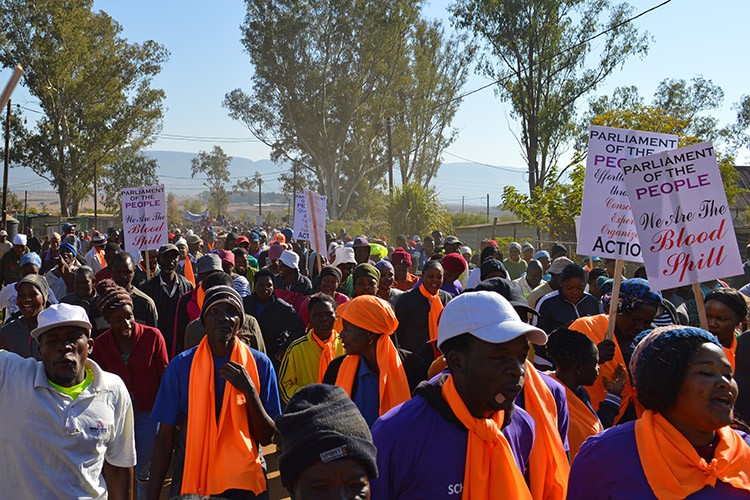 By Julia Chaskalson and Zinhl'Mbali Mdluli

On Friday, about 3,500 residents from Schaumberg informal settlement near Hekpoort in the North West marched to demand services – especially water, but also sanitation and refuse removal. They also want schools for their children.

The march started from the community centre and ended at a local sand quarrying mine called Quarry Quip, five kilometres away.

Representatives from the Madibeng Municipality as well as the departments of Water and Sanitation, Education, Rural Development and Land Reform, who had previously confirmed their attendance, did not pitch up. Only the Department of Mineral Resources was represented.

Each step of the proceedings was translated from Sotho, into Venda, Zulu and Shona. Jonas Ndou of the Schaumberg Residents’ Committee (SRC) explained that the community leaders wanted “everyone to feel welcome” at the march as the community has a large number of immigrants from Zimbabwe, Zambia, Malawi, Lesotho and Ethiopia.

In the 1950s, workers were “trucked-in” from Venda by farmers who needed labour, but some families say they were living in Schaumberg long before. Many of the residents still work on vegetable farms in the area.

The community was originally settled on land owned by the Van Gaalen Cheese farm, but in 2005, the land was sold to Heuning Pretorius, a farmer. In January 2006, the community was forced to leave after Pretorius obtained a court order to evict the community, which then consisted of 400 families.

“People were born there. I was born there. But still we were evicted in 2006,” says Abdullah Milanzi, who is on the SRC.

The families were moved to privately owned land nearby. This land was then sold to the local Madibeng Municipality for R800,000. But the municipality had not done an Environmental Impact Assessment, and it was not aware that the land was unsuitable for development.

Ndou says some areas are fine, while other “get flooded every time it rains”.

Without help from government, the community has been trying to find solutions on its own. There is a secondary school nearby, but until late last year there was no school for younger children. Because of the lack of schools and preschools, “Mothers [were] still picking cabbages and onions and beans with babies on their backs,” says a local farmer, Vivien Laverge, who works closely with the community. Then, after a seven-year-old girl was hit by a car on the street, the community opened its own preschool with the help of a large donation from a private individual.

It currently has 151 children and 14 volunteer teachers and child-minders. The community wants the preschool to be registered and the teachers to receive formal training and compensation.

Water was the main focus of the protest. Before the march, a group of 20 women gathered around the communal tap, each with three or four large containers to collect water. On the other side of the road, a pile of refuse was being burnt. Residents say this is a typical morning for them.

The SRF and Laverge have raised the issue of water and sanitation with the North West goverment several times over the past two years, but have received “no assistance” says Laverge. “We’ve gone through the policies and procedures. We’ve come up with solutions. We’ve engaged with them. They have just shown absolute incompetence.”

SRC member Christina Malola said, “The one tap is working, but it’s not enough.” She said the community has a plan to build “19 taps, one on each street corner”.

Abdullah Milanzi, also on the SRC, said: “We are developing Schaumberg ourselves … We organised electricity by ourselves. Now, we need water.”

Most shacks currently have access to just one light bulb powered by the generator.

In 2011, mining rights for the area were granted to a company called Quarry Quip on condition that it comply with a Social and Labour Plan mandated by the Department of Mineral Resources. Quarry Quip agreed to employ 52 members of the Schaumberg community, create another 104 jobs by building a brick-making plant and a cultural pot-making project for the specific benefit of the community.

But none of the terms of the plan were met. “The projects were supposed to be handed over in 2016 and there wasn’t a brick turned or rand spent,” said Laverge.

The Schaumberg community has received legal assistance from attorneys in Johannesburg, who are claiming R11 million against Quarry Quip, based on the cost of jobs lost, and the money that was budgeted for and should have been invested into community projects.

Quarry Quip however has gone into liquidation and GroundUp was unable to reach anyone for comment after numerous attempts.

A spokesperson from the Department of Mineral Resources, who attended the march on Friday, promised residents that the department would return “after four weeks” to give a progress report on better social and labour plans for local mines.