Plett Tourism says tourism has dropped by half 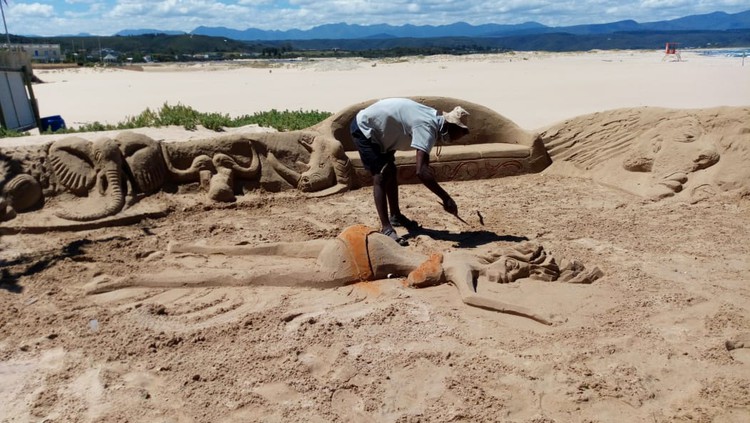 Sonwabo Micheal Somfele has been a sand sculptor for more than four years at Lookout Beach in Plettenberg Bay, but since the closure of the beaches and with fewer tourists around, he is struggling to make ends meet. Photo: Siphokazi Mnyobe

Sand sculptor Sonwabo Micheal Somfele has relied on the money he makes from making drawings and images at Lookout Beach in Plettenberg Bay for four years. But since the Garden Route was declared a hotspot, and the beaches closed, he is struggling to make a living.

Somfele says he sometimes has to go for days without food or electricity. “I use the little I make to buy bread and electricity so that my two kids do not sleep on a hungry stomach.”

“This past year has been hectic due to Covid-19 restrictions. We only started working in June and we didn’t make much money, as people do not visit beaches often in winter,” said Somfele. He has been surviving on the little he made during spring and summer.

He is one of many who relied on the steady stream of tourists and holiday makers to the coastline and who are now struggling to make a living.

Plettenberg Bay is home to six internationally recognised Blue Flag beaches and was voted Africa’s Leading Beach Destination by the 2020 World Travel Awards in November. Beaches are one of the town’s main drawcards.

Somfele said six sand sculptors take turns busking at the beach now. “Some people who have known us for years carry extra cash just for us,” said Somfele.

He said he and a partner usually arrive at 6am until the afternoon group arrives for their turn. He said if they are lucky, “we make about R100 compared to the usual R1,500 we made before lockdown”.

It takes them between 30 minutes and three hours to complete and perfect a sculpture, depending on its difficulty or size.

Most of their sculptures are inspired by nature. “We love animals so we create an imaginary world where wild animals are free to visit the beach,” he said.

Simrha and Gregory Gibbs have been cooking and selling “healthy home dishes” from their food truck for over four years. They only work during the festive season and cater at corporate events, dinner parties, and weddings, all of which have been prohibited under the current regulations.

“After the beaches were closed, most tourists cancelled their reservations and people were not coming to the beach. We had to let go of two of six seasonal staff members because we could not afford to pay them,” said Simrha Gibbs.

She said without a few local local holiday makers still supporting their food truck, their business would have been forced to close down.

“We have estimated a conservative drop of 50% in tourism,” she said. The season ends mid-January.

Butterworth said that Plett Tourism had joined other tourism bodies and businesses to reverse the closure of beaches in the Garden Route. In the meantime, the association is encouraging people not to cancel their bookings in the area. “We will try to find other avenues to help promote the destination,” she said.