“The slow violence of malnutrition”

One in four children under five is undernourished and one in eight is overweight or obese, say researchers

By Tariro Washinyira and Elsabé Brits 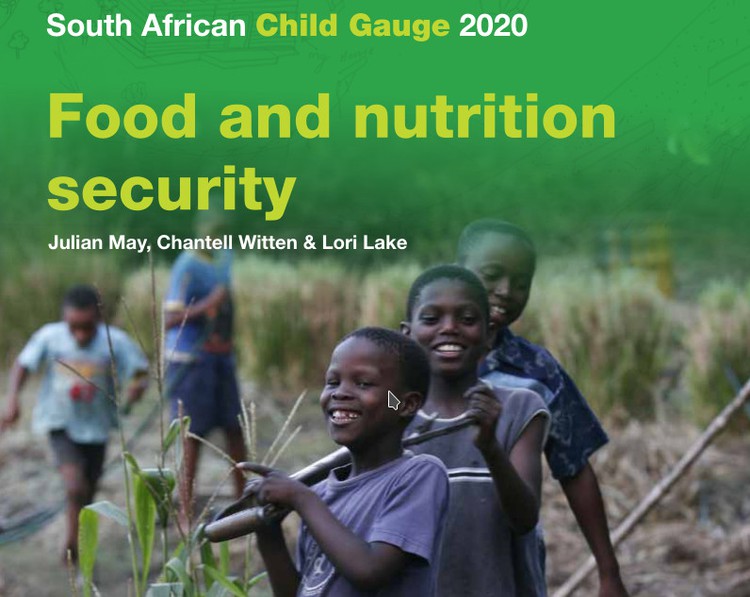 Front cover of the 2020 Child Gauge which was released on Thursday.

The nutritional status of South Africa’s children is deteriorating. One in four children under the age of five is stunted, a sign of chronic undernutrition that has remained unchanged for 20 years.

These were some of the findings of the 2020 South African Child Gauge, published annually by the Children’s Institute at the University of Cape Town (UCT). The latest 200-page issue focused on nutrition and food security.

The researchers found that 30% percent of South Africa’s children live below the food poverty line, which means being in a household with a per capita income of less than R571 per month. The extent and impact of maternal buffering, when mothers act as “shock absorbers”, deliberately limiting their own consumption to ensure that children have enough to eat, emerged as a coping strategy during the Covid-19 lockdown.

Covid-19 has intensified these existing challenges and is expected to precipitate a 14% increase in the global prevalence of moderate and severe acute malnutrition, the researchers say. By December 2020, child hunger had increased by 50% in South Africa, with 1 in 6 households reporting that children had gone hungry in the last seven days because there wasn’t enough food.

Emerging evidence points to a clear association between poverty, food insecurity, domestic violence and common mental disorders that undermine mothers’ capacity to respond and care for their children, and these pressures intensified during lockdown, the researchers say. Three million jobs were lost between February and June 2020 - with women accounting for 60% of jobs lost during the first wave. Yet, they are less likely than men to benefit from UIF and the Covid-19 relief grant, say the authors of the Child Gauge.

It is also possible that mothers may be eating inexpensive, energy-dense food as a coping strategy during episodes of poverty, as well as feeding their children such foods so that they feel sated, increasing both of their risks of becoming overweight or obese, the research found.

Frequent infections caused by overcrowding and poor access to water, sanitation and health care services further increase the risk of undernutrition which further undermines children’s immunity. Half of child hospital deaths are associated with moderate or severe acute malnutrition, say the researchers.

Dr Tracey Naledi, Deputy-Dean Health Services at UCT and Chairperson of Tekano, said undernutrition had remained a challenge in South Africa for over 20 years with a very high prevalence of 27 % as of 2016.

“Incomes have not grown with food prices increases and more and more households are struggling to feed themselves. Opportunities to escape from poverty are still racially and disproportionately distributed 25 years after democracy.”

To attain food justice and break the slow violence of malnutrition and child hunger there is a need to transform the food production systems, deal with the social and structural inequalities and the institutional power and policy framework that influence “our environment, our living conditions, our behaviour and how we function as a society,” she added.

“Much of women’s work is unpaid, further entrenching poverty, poor nutrition in women [and this] impacts child nutrition and health. This was all before Covid-19. The situation is even worse trapping even more women and children in poverty and hunger. This is violence,” Naledi said.

Liyema Saliwa, a learner from Oakland High School and a member of Equal Education, described children’s experiences of hunger and the closure during lockdown in part of 2020 of the National School Nutrition Programme that feeds over 9 million learners’ nutritious meals every day at school.

“Learners cannot concentrate without being fed or without having food. The closure of the programme left learners in poverty. In many of our households many of our parents were retrenched and are not able to feed us. This puts them under very high pressure and feels like they have failed us as parents. The Department of Basic Education (DBE) was supposed to provide us with meals whether we are at school or not. By doing this they would be holding on to the commitment they have made when we took them to court and Equal Education won. The DBE is promoting hunger and malnutrition and this is very sad for me.”

Dr Tshepo Motsepe, South Africa’s first lady, spoke at the launch as the patron of the South African Civil Society for Women’s, Adolescents’ and Children’s Health.

“The World Health Organisation speaks of violence as an action that results in or has a high likelihood of resulting in injury, death, psychological harm and maldevelopment. Children who manage to survive malnutrition continue carrying the harm in their bodies, minds and spirits for the rest of their lives and it doesn’t stop there. By attacking our children, malnutrition erodes our national development. The nation that starves its children is also starving itself.”

“Let us become a society that ensures no child goes to bed hungry,” Motsepe said.