The #Action4Inclusion campaign was started in 2020 and hopes to raise R2 million by Christmas to help those who can’t afford registration, accessing marks and other material 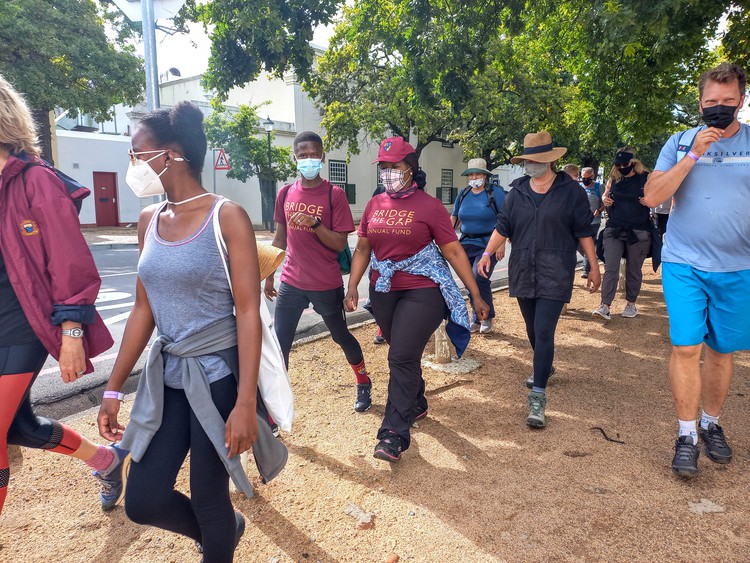 About 50 Stellenbosch University students, staff and alumni joined a 16km Social Justice Walk through Stellenbosch at the weekend to raise funds to help pay off student debt. Photo: Marecia Damons

About 50 people joined a 16 kilometre walk at the weekend to raise funds for a campaign to help Stellenbosch University students pay off their debt.

The walk, through the leafy streets of Stellenbosch, was part of the #Action4Inclusion campaign launched in 2021 by the university’s Student Representative Council (SRC) with Madonsela, the former dean of the law faculty Professor Sonia Human and others.

The campaign aims to raise a total of R10 million, but hopes to reach R2 million by Christmas.

Tickets for the walk on Saturday were sold at R540 per person. All proceeds were donated to the campaign which helps students who cannot afford to register for the next academic year due to outstanding fees, as well as graduates who cannot access their academic records once graduating due to finances.

Rector and Vice-Chancellor, Wim de Villiers said, “No deserving student should be denied access to higher education based on their financial struggles.” He added that while a substantial portion of the university’s income goes to bursaries, the decline of state subsidies for universities has increased the institution’s financial strain.

Madonsela said, “Charity should begin at home. There are students who were not even registered, suffering an injustice of being excluded from equal opportunities to study because they don’t have the money.”

She said the initiative mostly relies on crowdfunding events like hosting hikes, social justice walks and comedy nights with the help of Feenix and Backabuddy. “It really became a ‘do-it-yourself’ kind of thing … We are going to hold the government accountable to ensure that it progressively makes sure that no one is left behind, but we are also playing our part to fix the problem,” she said.

SRC Chairperson Viwe Kobokana said this campaign will help students in financial distress access their marks, certificates for their degrees and other academic transcripts. “When the first term starts next year, undergraduate students will be able to register, start classes, have access to their modules, SUNLearn and all other learning material with their peers,” said Kobokana.