Most tenants in Bramley property are immigrants 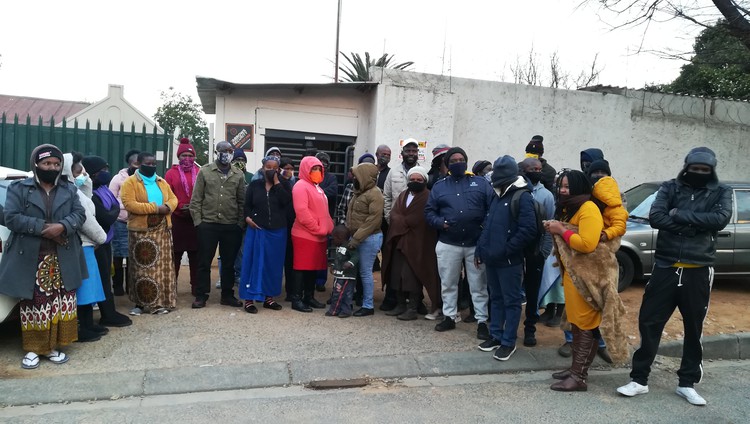 Tenants at a property in Bramley have been unable to pay their rent since lockdown. Photo: Zoë Postman

About 150 tenants living on a property in Bramley, Johannesburg, face eviction after failing to pay rent during lockdown.

Most are foreign nationals who work as bartenders, waitrons, cleaners, hairdressers and security guards. As a result of the lockdown, the tenants said, they had been unable to earn an income since April.

“We are worried about putting food on the table, getting sick, and now they want to leave us homeless,” said Chauke Caswell, one of the tenants of the Kew property. There are about 77 rooms on the property, with rent ranging roughly between R2,000 and R3,000 per room for a month.

Some tenants have been living on the property for ten years. Caswell said the owner was “turning her back on us”.

When we visited the property on Wednesday 17 June about 30 tenants, including children, congregated outside to tell their story. Tenant Kholofelo Matsaung said that when the lockdown began, the tenants knew they would not be able to pay rent. They had made an agreement with the owner’s son to pay the outstanding rent plus rent for the current month, after the lockdown. He had given them a document which they had signed but the owner “didn’t want to hear about an agreement, she just wanted her money,” Caswell told GroundUp.

The owner referred GroundUp to her lawyer, Paul Smith, who said the agreement was that the tenants must pay rent on 1 June plus a minimum of R300 toward the outstanding amount from previous months. The tenants had not honoured the agreement and had encouraged others not to pay rent either. “No-one would agree to an indefinite amount of time like when the lockdown ends”, he said.

Smith said most tenants were working but were not paying rent. “They leave the property every morning wearing uniforms and come back in the afternoon. That means they are working,” he said.

Smith said the owner had not forced anyone to leave. Tenants had been offered time to find another place to live and even transport [assistance] and the opportunity to transfer their deposit to another owner. “That’s more than any other landlord does,” said Smith.

When we visited the property there were about five toilets and six showers used by the tenants and none of the bathrooms had lights. The zinc ceilings in some of the rooms were rusted and had holes that allowed rain and wind to seep through. Some rooms had electricity and others did not.

Caswell said City Power disconnected the connection on Saturday, three days after we visited. The water was also cut off due to an unpaid municipal bill by the owner, he said.

Smith said City Power had disconnected the electricity because of non-payment by the tenants.

“Things can’t work when there is no money to maintain them … If it was such a horrible place to live I don’t believe they would be fighting to stay there,” said Smith.

Accusations of threats and harassment

Caswell said the owner sent “bouncers” to the property. They were not wearing any uniform, badges or name tags. When the tenants asked who they were, they said they were from the Kew Community Action Group, he said.

But Smith denied that this happened and said it would be illegal to do that.

Matsaung said the owner’s son had called some of their employers and told them that the tenants were “robbers” and were trying to hijack the building. “There’s a lady here who got fired as a result of that. Her boss just called and told her don’t come to work anymore because your landlord just told me you are a robber and hijacker,” she said. Smith confirmed that the owner’s son had called employers but said it was to find out if the tenants were still being paid.

Matsaung said the owner had also threatened them with deportation, “knowing that foreigners will panic”.

Caswell said the tenants had opened a case of harassment at Bramley Police Station that is currently being investigated.

Edward Molopi, research and advocacy officer at Socio-Economic Rights Institute, said owners had to engage with tenants and try to resolve problems out of court before beginning eviction proceedings. The eviction process provides occupiers with an opportunity to oppose or defend the eviction application.

“The Constitutional Court has also decided that any serious interference with someone’s ability to live in peace in their home constitutes an eviction,” Molopi said.