“Government has chosen to forget us” 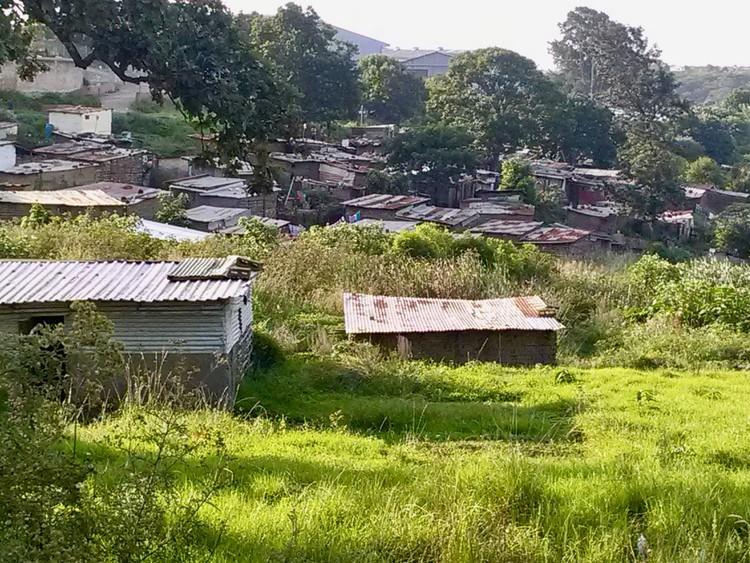 About 200 mud and shack houses in Katilumla, near Lusikisiki, are without electricity, sanitation or proper housing. Photo: Sibahle Siqathule

People in Katilumla in the small Eastern Cape town of Lusikisiki, near Port St Johns, have been living without basic services for decades. Established in the 1980s on state land, it is one of the oldest informal settlements in the area. About 200 households stay here without electricity, sanitation or proper housing. There is one communal tap.

According to residents the tap runs dry frequently, sometimes for weeks at a time. They blame a dwindling municipal water supply and vandalism. Residents resort to fetching water from a stream where livestock drink.

Barnabas Kokman said: “This past June there was no water here for three weeks. It’s really a hard life for us here. I am forced to pay someone to fetch water because I have a problem with my leg.”

Kokman survives on disability grant after an injury left him unable to use his right leg. He uses a crutch.

“People first came here in the late 1980s from their villages to be close to town and to work opportunities, schools and clinics. This place gave us a promise of a better life, but that wasn’t to be,” said Kokman.

Masabela Nyawose has lived in Katilumla since 1996. She stays in a one-roomed mud house and sells traditional beer (umqombothi).

“We are a forgotten people. Government has chosen to forget us. They only remember that we are here when they need our votes … We deserve better than this government,” said Nyawose.

In May GroundUp reported that residents said they would not vote in the general election.

Yamkela Ndlovu, who is 24, was born and raised in Katilumla. “We have seen the town and surrounding villages slowly developing, but not us. Promises of building us homes have been made many times, but we still live in these terrible conditions. Government does not care about us.”

Ward committee member Philiswa Mzaza said, “Year in and year out we wait for change but nothing happens … Another challenge we’re dealing with here is the rife unemployment.”

Ingquza Hill Local Municipality Mayor Bambezakhe Goya said: “It is true that the community of Katilumla is living under unacceptable conditions. We spoke to the Department of Human Settlements and housing is being provided at Gqathula Location.”

RDP houses have not yet been built, but some people have been relocated to 21 prefabricated one-roomed structures in Kwa Gqathula Location.

One of these beneficiaries spoke on condition of anonymity. “We have been here close to two years now. The situation is better, but we still have to fend for water as the community taps are far. We also still don’t have electricity here.”

Katilumla Ward Councillor Wiseman Ranayi asked for patience. “We are in the process of installing another tap in the settlement. We are also registering people for RDP homes, people who were not allocated houses in Slovo Location or in Kwa Gqathula … Electricity for Katilumla has also been allocated in the 2019/ 2020 budget.”