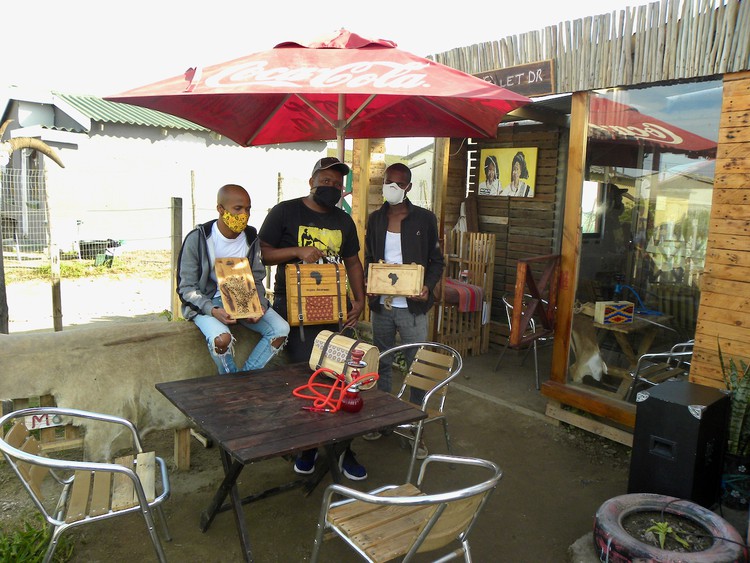 Ulundi Mpulu, flanked by his brother Bakhusele Mpulu (right) and Thando Kofi, showing off some of the products he makes from discarded wooden pallets at his curio shop attached to his family home in Motherwell. Photo: Joseph Chirume.

A young man in Port Elizabeth is making a living by carving curios from the wooden planks of discarded pallets.

Ulundi Mpulu, who is just 21, started creating wooden objects when he was very young. He says he always admired his mother’s father, who was a carpenter.

Mpulu says the sight of dumped pallets always bothered him.

“I started creating curios in 2017, after realising that there were many discarded wooden pallets around Motherwell. These pallets block storm water drains and ultimately cause pollution by causing sewage spillages.

“Turning the pallets into a money-making project was not difficult since I grew up with a deep passion for woodwork inherited from my grandfather. I learnt a lot of skills from him,” he says.

In 2017 Mpulu obtained a one-year certificate in carpentry from the Raymond Mhlaba Training Center.

In 2018 he established his business, The House of Pallets, a two-roomed building joined to the family home in NU10, Motherwell, where he lives with his mother and ten siblings.

“I started getting orders from people who wanted me to beautify and modify their furniture. Others gave me orders to create wooden storage boxes, bags, chairs, benches and other products.”

“After realising that the business was being welcomed by residents, other township artists approached me to have their products exhibited in the curio shop,” he says.

Mpulu is assisted by his brother, Bhakhusele, and their mother, Nomfundo, who run a kitchen specialising in African cuisine.

“We want visitors and tourists to feel at home when they visit The House of Pallets. We have turned everything to reflect the theme of wood. Ulundi is into wood manufacturing while we feed his tourists and visitors,” says Bhakhusele.

Mpulu is also assisted by family friends Thando Kofi, who markets the business on social media, and Phumlisa Seti, who is a photographer.

“I want to train the youth on how to turn dumped wooden pallets into curios that will be sold to the public, earning them income,” says Mpulu.