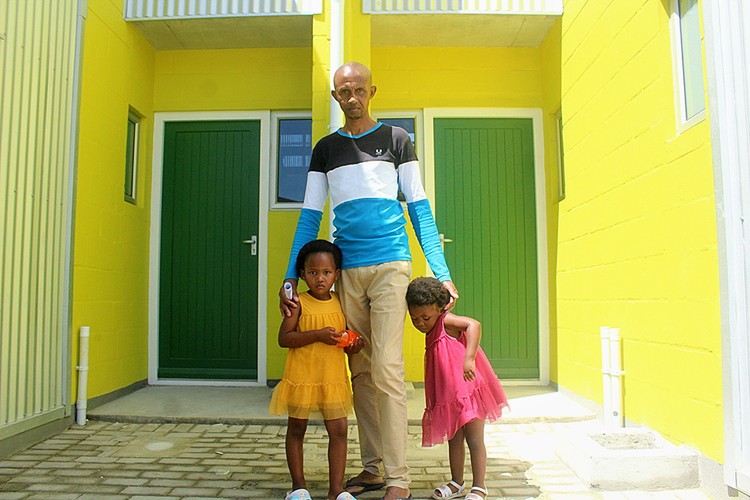 Amos Lephaila, 46, with his daughters Limyoli and Thorie. Theirs is one of 73 families who have received new homes as part of an alternative affordable housing project in Khayelitsha, Cape Town. “My little girls are used to rats and cockroaches, but that will be a thing of the past. It’s going to be a different Christmas for us,” says Lephaila. Photos: Masixole Feni

Amos Lephaila and Nolusanda Booi from Site C, Khayelitsha in Cape Town have lived in a shack since 2015 with their four daughters. They are among 20 families who will soon move into newly built homes in Site C in the last phase of an alternative affordable housing project.

A project like this hasn’t been done before. Built in part as a research project by a university team, the houses use architectural ideas not previously used in government housing.

The homes were designed and built by the Khayelitsha-based organisation, Ikhayalami, in collaboration with design studio Urban Think Tank (UTT) based at the Swiss Institute of Technology in Zurich, and the Site C community.

The project, called Empower Shack, has been in the works since 2015. A total of 73 homes have been built on the same site where the families had occupied.

“When I arrived here this place was terrible. Living in an informal settlement, we had rats and used buckets [toilet]. When I look at it now, it is like heaven to us because now we’re going to have toilets and running water. It’s a massive change,” said Lephaila. The father of four is his household’s breadwinner and works as a security officer.

Urban Think Tank architect Benjamin Kollenberg told GroundUp that the homes were built in five phases over six years. During each phase, up to 15 families were relocated to temporary structures on the site for three to four months while their homes were being built.

According to Kollenberg, the housing project started as a research project which investigated how to house people “more efficiently and with more dignity”.

Researchers held talks with the community and mapped out the requirements given by the residents. “For example, if they’re already running a shop from home or if they’re renting out a room etc. We compiled all that data and from that built this model to house them more efficiently,” he said.

Kollenberg explained that although the land is still City-owned, there are plans to transfer ownership to qualifying residents. 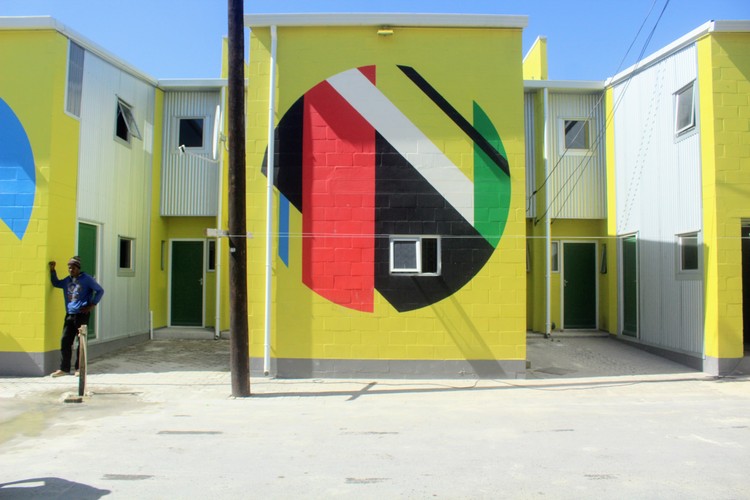 Each household in the project could choose from five different model sizes, depending on affordability and family needs, ranging from 42.5 square metres to 80 square metres.

Ben Nkuna, general manager of programmes and fiance at Ikhayalami, said the organisation has been involved in reblocking projects to create more space between shacks at informal settlements across Khayelitsha.

Nkuna explained that the idea for the project began in 2014 when UTT co-founder and director Alfredo Brillembourg met Ikhayalami’s director Andy Bolnick to better understand informal housing in the city.

“Brillembourg and our director then started talking about advanced reblocking by taking the current reblocking to a double-storey setup. This creates more space for people to do more things, like space for children to play and creating roads in between homes,” said Nkuna.

Following talks with the City of Cape Town, the team decided to use fire-resistant material to make the homes. The structures are made of brick, wood, zinc sheets, and are fireproof and water-resistant. Each household could choose from five different model sizes, depending on affordability and their family’s needs, ranging from 42.5 square metres to 80 square metres.

He said about 90% of the project’s funding came from Swiss Re, a reinsurance firm based in Switzerland. Each family is paying the remaining 10% cost, mostly through microfinance loans, with the option to repay between 36 months to 60 months. The monthly instalments range from R300 to R1,300. 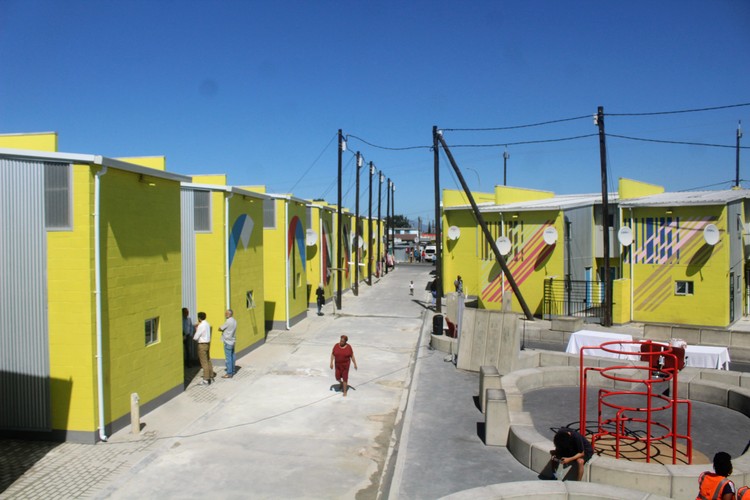 The Empower Shack project homes were designed and built by the Khayelitsha-based organisation, Ikhayalami, in collaboration with design studio Urban Think Tank (UTT) based at the Swiss Institute of Technology in Zurich, and the Site C community.

Nkuna said that there are no dividing walls built inside the homes, which allows residents to partition the space to fit their needs. The homes have a bathroom with a flush toilet, basin and shower.

Each is fitted with a water management device, installed by the City. The families receive 350 litres of free water per day. The water supply is cut off after the allocation is used up. Each household also has an electricity metre and buys prepaid units as needed.

Eddie Andrews, Deputy Mayor and Mayco Member for Spatial Planning, welcomed the project and commended Ikhayalami, UTT, funders and the Site C community for making the project a reality.

“What I love about this project is that it is not just a home, but a community. You have a place to stay, to play and to work. At the end of the day, it is attracting the necessary investment, other than the City’s investment in the area.”

Andrews said the project is a “perfect example” of how housing progress is possible within the city. “This model works. When the community accepts the project and there’s buy-in, we know that it will be well looked after,” said Andrews.

Kollenberg said they are still actively doing maintenance and other minor work on the project but have started “slowly phase out” their involvement to allow the residents to fully take over.

He said that they plan on building a community centre at the site within the next year to complete the project.