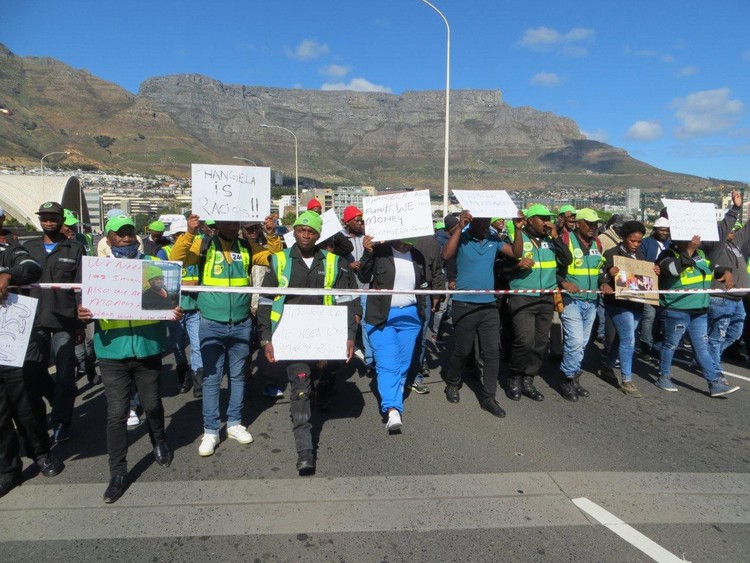 She was among about a hundred former and current security guards of the security firm, Phangela Group, who marched to the Cape Town Civic Centre on Friday. The workers marched under the banner of the Democratic Municipal and Allied Workers’ Union of South Africa (DEMAWUSA).

Ngqalo, like many other workers in the group whose contracts were terminated last month, said the sudden end of her employment has meant she is unable to pay her expenses or buy food.

The guards now want the City and the Cape Town Central City Improvement District (CCID) to intervene in the matter.

Nadine Adams, DEMAWUSA National Treasurer, said about 80 guards were suspended while about 120 others were fired. She said that on 1 March the Phangela Group took over from Mthuma Protection Services (Iliso) which was the sole security service provider for the CCID.

“Phangela came with resources like the latest cars. They instructed all mobile supervisors who have been employed for many years to be passengers and they were not allowed to drive the vehicles. The mobile supervisors were also instructed to have SAPS competency, which was not a requirement of their job description before,” she said.

Adams said they wanted the CCID to pressure Phangela into reinstating the dismissed guards or to employ the guards themselves. “The guards are struggling to support their families now,” she said.

Muneeb Hendricks, CCID Manager of Safety and Security, told marchers, “We want to answer your memo, but certain things are out of our control. I can’t tell a company how to deal with their staff.”

CCID CEO Tasso Evangelinos said they have contacted the Phangela Group and urged them to find an amicable and fair outcome.

But Adams believes the company should be doing more to help the security guards. “The current system exploits the working class. If the City was monitoring its service providers, none of this would happen,” she said.

Sinethemba Lubleki, a DEMAWUSA shop steward, said the workers initially received notices that the terms of employment would remain the same under the new management, but this changed as soon as Phangela took over. He accused the company of racism, saying that only black workers were excluded as drivers.

“The old drivers were made to be passengers who showed the new drivers around Cape Town and taught them how to work. When we asked the managers about the changes, they said they don’t answer to guards,” he said.

Lubleki said the guards then protested at Thibault Square on 8 March. Three days later, the union met with the Phangela Group CEO Charles Jacobs who told them that their organisational rights would be terminated due to insufficient representation. Night shift guards refused to work on 11 March and demanded that management explain the changes in their working conditions, which they declined.

The guards were then given letters of suspension and stopped them from entering the offices the following day.

Currently, some guards are fired while others are awaiting the outcomes of their disciplinary hearings, said Lubleki. “The majority of them were fired in their absence for participating in an unprotected strike and for refusing to work.”

The Private Security Regulatory Authority and the Department of Employment and Labour are also investigating allegations against Phangela Group.

A response from Phangela Group will be added once it is received.

Next:  Video: How not to treat a patient