Some landlords increased rent in some buildings by 200% during the hard lockdown, says activist 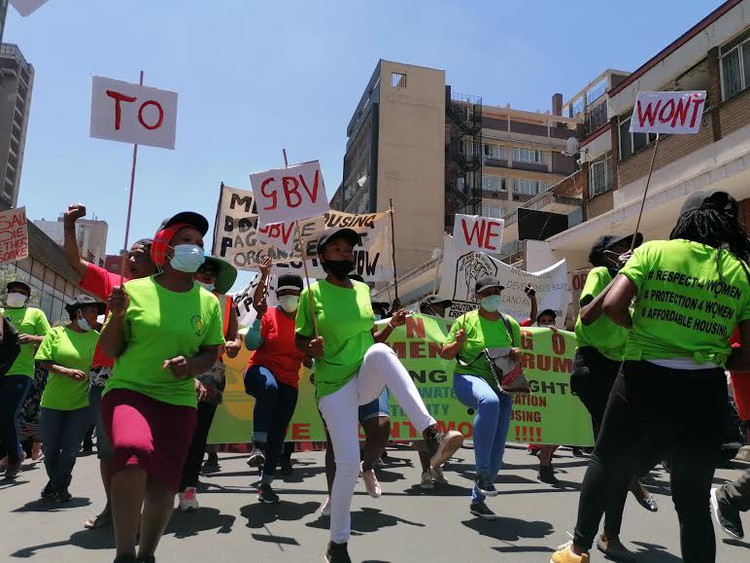 About 100 people marched to the Gauteng Legislature in Newtown, Johannesburg on Wednesday, demanding affordable housing in the inner city among other things. Photo: Zoë Postman

Johannesburg residents want dilapidated buildings in the inner city to be developed into housing for poor and working class people. They also want rent control measures and a moratorium on all evictions. These are some of the demands they made in a protest on Wednesday, supported by the Inner City Resource Centre (ICRC).

Marchers held placards which read: “We want affordable housing”, “Water to wash our hands” and “Our voices are many but our purpose is one - #Housing”.

According to the ICRC’s memorandum, the Covid-19 pandemic had demonstrated how the Gauteng government was failing to provide basic services such as running water to people in informal settlements across the province. “We have forced our inclusion into various government schemes and Imbizos purported to provide solutions for the housing crisis in Johannesburg and the Gauteng province in general. Much of that energy and resources has led to no tangible results,” read the memorandum.

The group also demanded the City implement the Rapid Land Release programme and housing for all backyard and shack dwellers.

“How can the government talk about washing your hands when in Booysens informal settlement for example, there is no running water?” asked protest organiser, Ayesha Rajah.

She said that many communities decided to join ICRC’s march because they faced the same issues. Rajah said that in Turffontein the biggest problem was landlords who “think they are above the law.”

She said landlords had increased rent in some buildings by 200% “in the middle of a pandemic.” (GroundUp has not verified this.) She said those landlords also used illegal electricity connections “which means they are stealing from the City and the tenants”.

Doctor Mokwena, a resident of Orange Grove who joined the march, said the City must stop evictions immediately and halt the sale of land initially earmarked for housing.

“We want the government to give us houses and not empty promises. If they can’t do that, they must give us land and we will build our own houses,” he said.

The memorandum was handed to Mthuthuzeli Siboze from the Gauteng Rapid Response Team, who agreed to respond to the memorandum within seven working days.

Next:  In the midst of water restrictions, clean water gushes out of taps in Uitenhage

Previous:  Covid-19: We are going to be very strict, Motsoaledi warns Zimbabwean travellers