Following a meeting with organisations last week, the presidency acknowledged the impact the grant has had in reducing poverty and hunger 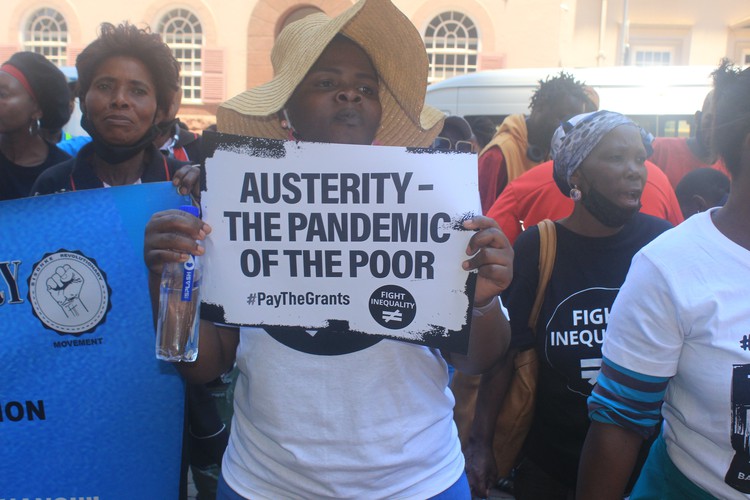 Civil society organisations met the President and some Cabinet Ministers last week to plead for the R350 Covid Social Relief of Distress (SRD) grant to be extended beyond the state of disaster. Archive photo: Mosima Rafapa

Civil society organisations want the president to set up a task team with experts to deal with the immediate extension and increase of the R350 Covid Social Relief of Distress (SRD) grant.

A movement consisting of the Institute for Economic Justice (IEJ), Black Sash, Studies in Poverty and Inequality Institute (SPII), Amandla.mobi and the #PayTheGrants campaign met with President Cyril Ramphosa last week to discuss the matter.

According to the South African Social Security Agency (SASSA), about ten million applicants have been approved to receive the SRD grant.

The Black Sash’s Hoodah Abrahams-Fayker could not divulge specific details of the meeting, she described it as being “fruitful and productive”. She said there was consensus by the presidency and the ministers that the grant has been a “significant measure of support to unemployed and poor people”.

During the meeting, activists reiterated the need to extend the grant and the advantages of expanding the SRD grant to becoming a permanent Basic Income Guarantee (BIG) grant.

Without the SRD grant, poverty would have been 5% higher among the poorest households, the organisations claimed in a statement on Monday. The grant increased the likelihood of job searches, they said, and about 36 million people benefited directly or indirectly from it and the Caregivers’ grants.

Currently, the SRD grant only exists under the State of Disaster’s provisions. Once these provisions are dissolved, activists recommended that the grant be extended by “adopting it [into] the Social Assistance legal framework until at least February 2023 or until a BIG is phased in”.

During Minister Godongwana’s delivery of the 2021 Medium Term Budget Policy Statement (MTBPS), he did not mention the extension of the SRD grant.

Last year, activist organisations criticised a proposal by the National Treasury for a family grant that would essentially replace the SRD grant. This, the government proposed, would be paid to heads of households.

The proposed family grant would, as a pilot, only be offered to one million households in the first year and then be gradually increased each year by another million households. Activists believe this proposed grant is “anti-poor” because it would exclude millions of poor people already relying on social security, among other issues.

Despite the success of the SRD grant, many applicants have struggled to access it. Some of the challenges include the eligibility criteria which stipulated that only South Africans, permanent residents or refugees registered with Home Affairs could apply. Applicants also must be older than 18, be unemployed and not receive any form of an income like from social grants, the Unemployment Insurance Fund (UIF), the National Student Financial Aid Scheme (NSFAS), or any other Covid response support.

Dalli Weyers of the Institute for Economic Justice (IEJ) said individual grants, opposed to household grants, often have a greater impact in poor households and result in improved social independence.

The group also proposed that a Presidential Expert Panel be appointed to review existing research for the best design, infrastructure and financing for the implementation of a basic income guarantee in South Africa.

Although there was no firm commitment to extend the SRD grant yet, the President, in a statement, again acknowledged the impact the grant has had in reducing poverty and hunger.

According to the Presidency, it was agreed that further talks with the activists would take place. “The meeting affirmed the need to work towards affordable and sustainable social protection mechanisms that complement job creation and drive local demand, with due consideration of the fiscal implications,” the statement read.

Next:  Families still without water as second pipe bursts in Cape Town township