15-year-old Donnel, who has hydrocephalus, wants to go to school 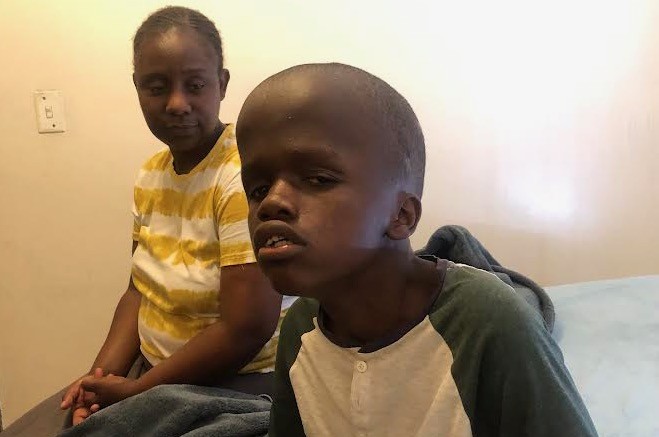 Blessing Mupamhanga and her 15-year-old son, Donnel, who has hydrocephalus. Mupamhanga says she is unable to work because she has to care for Donnel during the day. Photo: Mary-Anne Gontsana

A mother from Retreat in Cape Town has had to resort to begging on the street just to buy diapers for her disabled son. Blessing Mupamhanga says her wish is for her 15-year-old son, Donnel, to go to school.

As a baby, Donnel was diagnosed with hydrocephalus, which has left him with an abnormally large head and damaged his spine. He is paralysed from the waist down. He uses a wheelchair.

Mupamhanga says Donnel was asked to leave the daycare centre he was attending because he was deemed to be able to attend mainstream schools. “Mentally he is fine and can communicate like any person, the disability is physical. He is clever, attentive and very good at communicating. I feel like him being home is doing him a major disservice,” said Mupamhanga.

Mupamhanga moved to South Africa from Zimbabwe over 10 years ago, when her husband got a job. But Donnel’s father died of cancer when he was four years old.

“That’s when things started to go wrong. I couldn’t get a job because I had no one to take care of Donnel. He wears diapers, and needs to be bathed. If he was in school, I would manage,” says Mupamhanga. She says Donnel can use his arms and hands, though his left side is weaker than the right.

When GroundUp visited Mupamhanga and Donnel in the rented room they share with Donnel’s younger sister, the teenager was lying in bed with earphones on, listening to music. He removed the earphones, smiled widely and introduced himself.

Asked what he was listening to, he said he was listening to amapiano, a style of house music. “I love music and I listen to different kinds. Amapiano, sometimes even gospel,” he said. His mother says her son wakes at 5:00am and spends much of the day listening to music. She says he used to enjoy watching cartoons but they no longer have a television set.

Mupamhanga relies on piece jobs, but she often has to turn them down because there is no one else to help Donnel during the day. She battles to buy food and toiletries for Donnel: diapers and wet wipes cost her over R700 a month, she says.

During weekends, she goes to Sea Point by bus with Donnel and sits on the seafront with Donnel in his wheelchair, asking for donations for diapers.

Western Cape Education Department Bronagh Hammond promised that they would get in touch with Mupamhanga. “Once we have the learner’s details, we can ask one of our Special Care Managers to arrange an assessment to determine the best school suitable to his needs,” said Hammond. The South African Schools Act encourages learners with disabilities to enrol in public ordinary schools. In terms of the Act, provincial education departments must make sure learners with disabilities get the necessary support when in school.

Asked about access to a disability grant and other support for Donnel, Western Cape Department of Social Development spokesperson Esther Lewis said, “Where psychosocial support is needed, the mother should approach the nearest local office, and an assessment will be done to establish the individual and family’s needs. Based on the outcome of the assessment, an appropriate intervention plan would be developed.” In a statement to mark Disability Rights Awareness Month which ends on 3 December, Western Cape MEC for Social Development Sharna Fernandez said, “The barriers faced by persons with disabilities are often imposed by society. It is our responsibility to create environments that encourage inclusivity and integration.”

On Monday, Mupamhanga said Donnel had finally been assessed with a view to enrolment at a special needs school and she was hopeful that he might be admitted.

Next:  Woman who survived mountain fall must wait six weeks for operation

Previous:  Concourt hands critics of Australian mine partial victory – but defamation battle is not over