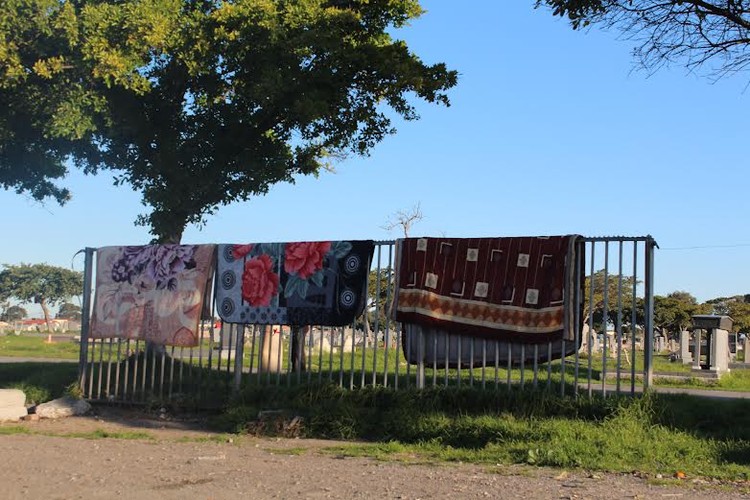 Families use what’s left of the fence to hang their washing at the neglected Gugulethu Cemetery. Photo: Mary-Anne Gontsana

Boys play soccer in the neglected Gugulethu Cemetery, people use it as a short cut, and families hang washing on what’s left of its fence. Now Gugulethu residents have started a petition asking the City of Cape Town to pay more attention to the cemetery.

The petition on Change.org has more than 1,600 signatures since it was started on 10 July.

Driving down NY108 to the cemetery, along two main roads, one sees a broken fence, a vandalised sign and empty space where fencing has been stolen.

Community member Xolile Ndzoyi, who started the petition, said: “On any day you will see children inside the cemetery playing soccer. People are using what is left of the fence to hang their clothes and blankets after washing them. How can you do that at a graveyard?” said Ndzoyi.

A Gugulethu resident who identified herself only as Sibongile, had just visited a grave when she spoke to GroundUp. “Even now, those kids are playing soccer here. That ball can easily be kicked onto someone’s grave or tombstone.”

“My grandparents, my mother and uncle are buried here. Who knows what happens on their graves when I’m not here. A graveyard is supposed to be sacred,” she said.

Walking through the cemetery, there were some broken tombstones.

At the other side of the cemetery, the main entrance and fencing there was still intact.

Signatories to the petition asked the City to consider building a brick or concrete wall around the cemetery to prevent vandalism of fencing, and to replace the lockable gates to help security guards to limit access.

“They should allow families who need to clean or who are there in preparation for an unveiling of a tombstone or an actual funeral which is what the graveyard is intended for,” they said.

Mayoral Committee Member for Community Service and Health Patricia van der Ross said the City was aware of the vandalism.

“Vandalism of City facilities, including the theft of fencing has become a daily occurrence throughout the metropole. This is costing departments millions of rand to replace or fix, only to get stolen again.”

She said security personnel had been deployed to patrol and safeguard the premises until a fence is erected. She did not say when that would be.

Next:  Horses work “magic” for children with disabilities