Toilets are filthy, lights have been stripped, roofs are broken 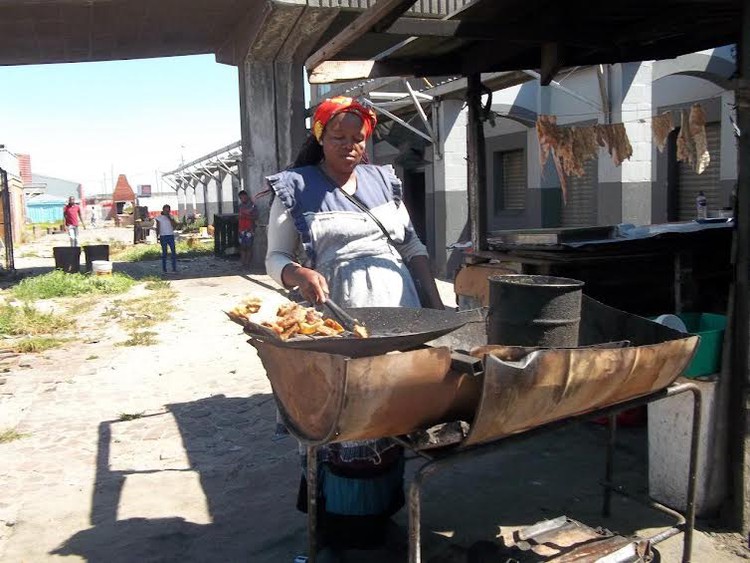 Trader Nompumelelo Mphelo, who sells sells braaied liver and cow innards, says customers stay away from the market because of the poor conditions. Photo: Vincent Lali

The City of Cape Town has promised to fix Nonqubela Informal Market outside Nonqubela Train Station in Khayelitsha, where vandalism and theft have left small traders in despair.

At the moment the toilets are littered with excrement and rubbish and have been stripped of pipes, water taps and cisterns. Some market stalls and kiosks meant to shield the traders and customers from the rain and sun have no roofs or lights.

The traders use the stalls to store their spices, spoons, plates, pots and meat. Customers sit in the stalls while they eat.

Councillor Rob Quintas, Mayoral Committee Member for Transport told GroundUp officials had conducted a site inspection. Burglar bar gates would be installed at the toilets and floodlights would be installed for the whole area. “We are in the process of getting a quote for the electrical work,” he said.

The traders welcomed the promises but urged the City to tighten security at the market first.

Nosakhele Msesi, who sells cow meat to support her family, said: “The City must hire armed guards before they install burglar doors and flood lights, otherwise criminals will steal them again within a week.”

Nomfuneko Mpuhlu, who sells braaied liver, said: “The City must put an enclosure around the market place to keep criminals at bay first.”

The traders want the City to repair the market place before the winter rains, she said.

Toilets have been vandalised and are filthy. Photo: Vincent Lali

Nompumelelo Mphelo, who also sells sells braaied liver and cow innards to support her family in Site B, said customers no longer flock to the market stalls because of the conditions under which the traders sell.

Thugs broke into her stall and stole her three chairs and table two weeks ago, she said.

“I have brought another chair from my place. I will have to carry it on my shoulders along with my dishes, pots and spices when I go home as the thugs seem to steal indiscriminately,” she said.

Mphelo said the state of the market place had forced some traders to leave and put up their stands elsewhere.

“When I arrive at my stall in the mornings, I find my tables and chairs covered in dust because zincs from the roof were stolen,” she said.

Thobeka Mashwawu sells braaied cow and sheep intestines at the market to maintain her two children in Mfuleni where she lives. She said she struggles to sell meat on rainy days as heavy rains put out her fire. She said customers don’t want to eat in unroofed stalls.

Mpuhlu said the toilets have not been working since October last year.

“The toilets are so dirty that we resort to paying R1 to use toilets located at Nonqubela Mall nearby,” she said.

Next:  IPID probes case of child killed in hit-and-run

Previous:  There’s another pandemic we should be focused on: antibiotic-resistant infections