Garbage collection resumes in Khayelitsha after weeks of rubbish piling up

A tender appeal interrupted garbage collection for over two weeks 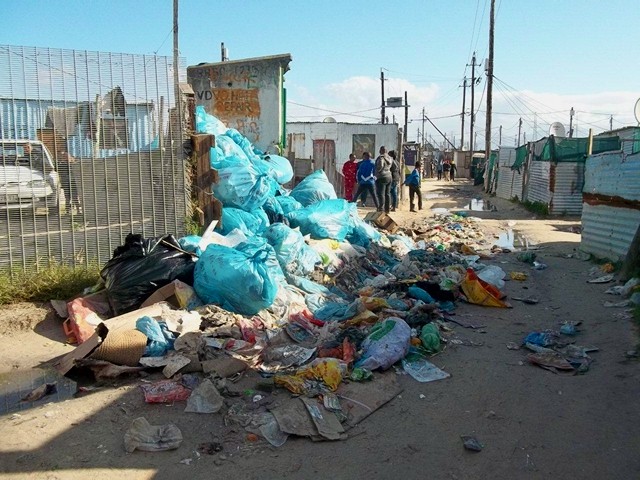 Rubbish went uncollected in much of Khayelitsha for two weeks and piled up in informal settlements. Refuse removal restarted on Wednesday, 14 July. Photo: Vincent Lali

When GroundUp visited RR section in Site B at the weekend, rubbish had not been collected in Khayelitsha for almost two weeks. Blue bags filled with rubbish were piling up on the corners of thoroughfares. Shack dweller Sibongile Nyelela said she hadn’t seen rubbish collection in her area for about three weeks.

According to the City of Cape Town the interruption of services was due to a tender appeal.

Community leader Eddie Nogwaxa told GroundUp, “Normally cleaners collect and drop it in a shipping container, but we don’t see them anymore … When the wind blows, the rubbish becomes difficult to control, and scatters around and moves into [our] shacks … The entire informal settlement is dirty.”

“It’s dirty and stinking in most areas where rubbish is not being collected. Residents are battling with rats,” said Bonga Zamisa, community organiser for the Social Justice Coalition.

Mayco Member for Waste Alderman Xanthea Limberg said, “As a result of the appeal, the City’s solid waste management department had to apply for an extension of the contract with the previous financial years’ service provider to allow services to continue while the appeal is considered.”

The extension was granted and collection resumed on 14 July.

“Since Monday the City has been using internal resources to help clear waste that accumulated during the service disruption, as well as illegally dumped builders rubble in the area. This requires specialist equipment and four grab trucks; two trucks, and one frontend loader have been deployed to assist with clearing,” said Limberg.

On Thursday morning resident Bonga Zamisa said, “I have seen workers load piles of rubbish on a truck this morning, but Khayelitsha is still dirty.”

Resident Eddie Nogwaxa said, “This morning [Thursday] they are removing heaps of rubbish scattered around here. Piles of rubbish are still there as they are only starting to clean now.”

Next:  Transport department to shut down “problematic” ranks and routes if taxi violence continues