Khayelitsha chaos continues, but there is hope: from 1 September SASSA services will also be offered at the City of Cape Town’s Kuyasa office. 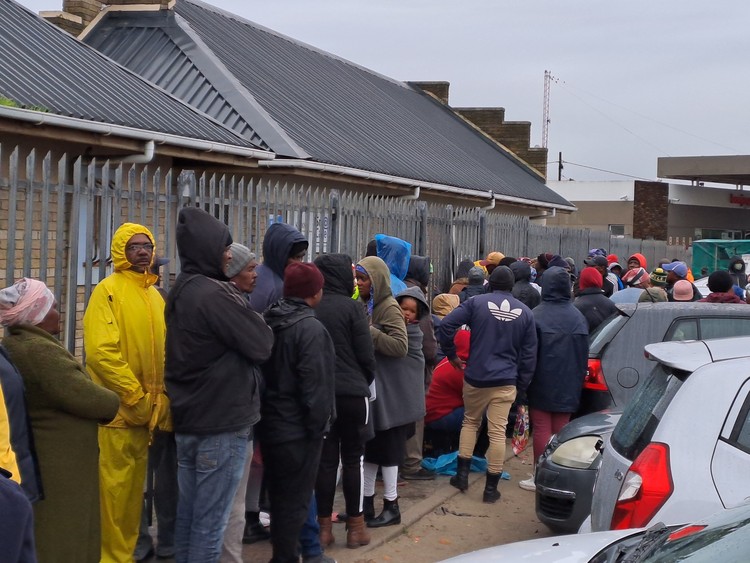 About 100 people queue in the rain and cold weather outside SASSA’s temporary office at the Khulani Resource Centre opposite the Lingelethu West SAPS station in Khayelitsha. This follows the sudden closure of its office which caused chaos and confusion for beneficiaries last month. Photo: Liezl Human

The closure of the main social grants office in Khayelitsha has caused chaos and confusion for beneficiaries being sent back and forth between offices.

The office was closed for maintenance in July with little to no notice given to hundreds of grant recipients. The building, which also housed the provincial Department of Social Development, is undergoing maintenance and is expected to reopen next year.

The closure caused beneficiaries from Khayelitsha to flock to surrounding SASSA offices such as Mitchells Plain. People told us they were not helped at the Mitchells Plain or Eerste Rivier offices despite being given dates and told by officials to be there.

Following public outcry, SASSA announced that it would be continuing its services at the Khulani Resource Centre opposite the Lingelethu West SAPS.

“Staff from the Khayelitsha Office were redeployed to other sites in the metro. A priority queue specifically for all clients from Khayelitsha was also established at these sites,” SASSA said in a statement.

When we visited the new temporary site, there were about 100 people queued in the rain and cold weather outside. Many of them had travelled to the new office after they were not helped at the surrounding offices.

We spoke to beneficiaries who asked that we withhold their names because they are scared it will affect the outcome of their grant applications.

A disability grant recipient told GroundUp that it was her third visit to a SASSA office that week without being assisted. She said she was worried that she may only be given new appointment dates instead of being assisted. “We’re waking up every morning just to get a date [from SASSA],” she said.

Another beneficiary said she went to the Eerste Rivier office when the Khayelitsha one closed. “I was sent back here. We’re not working. It cost money to go there.” This was her second day standing in line for help at the temporary Khayelitsha office.

She said some people sleep outside on the pavement while others come as early as 2am to be among the first in line. “What about their health? It’s cold outside. It’s raining.”

Thandi Henkeman, Western Cape Regional Officer at the Black Sash, said the organisation has been monitoring the situation in Khayelitsha and has raised several concerns.

“SASSA agreed for Black Sash to have a direct line to SASSA to report any challenges,” said Henkeman.

She said that it was unacceptable that beneficiaries had to sleep outside in order to ensure they are helped. “Beneficiaries are desperate and pressured due to the uncertainty of services and the lack of communication. They feel forced to take the risk of sleeping outside to secure a place [in line],” said Henkeman.

She also noted that the Khayelitsha office’s queue management has been an ongoing issue. She said this was partly due to beneficiaries having to constantly return to the office to “resolve issues or even restart processes due to misplaced data”.

On 15 August, the City of Cape Town announced that it has signed a three-year lease with the welfare agency for two floors in its Kuyasa sub-council office starting on 1 September. Under the lease agreement, a refurbishment of the space is planned.

She said they interact with about 480 to 500 clients per day at the temporary office. “During the office’s relocation process and clients being redirected to other offices in the metro, a booking system was implemented to ensure that every client was assisted, even if they could not be assisted on the specific day,” said Wahab. She said the office has also extended its working hours.

This article was updated to include a brief comment from SASSA Western Cape.