“I was relaxing on my couch when they arrived with their crowbars. They just tore apart my shack” says Gqeberha mother of four 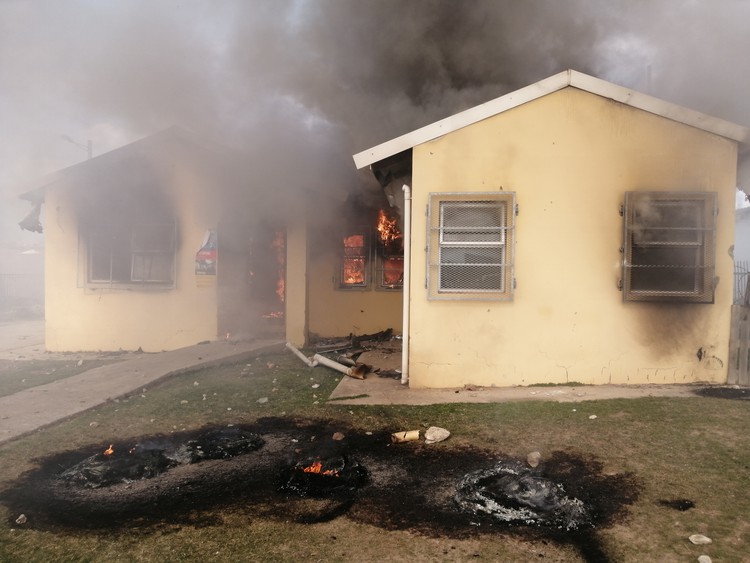 Ward 31 Councillor Luyolo Nombola’s office was burnt down by angry Missionvale residents on Wednesday after 30 shacks in the area were demolished. Photo: Mkhuseli Sizani

Chaos erupted in Missionvale township in Gqeberha on Wednesday when about 100 people blocked Old Uitenhage Road with storm water pipes and burning tyres.

The protest followed the municipality demolishing 30 shacks recently erected in the area. The community retaliated by stoning the Nelson Mandela University Missionvale campus building and burnt tyres at the gates. The group also torched the ward councillor’s office, assaulted the PR Councillor and damaged her vehicle.

Resident Sumaria Soetwater told GroundUp that their homes were destroyed without any warning. “I was relaxing on my couch when they arrived with their crowbars. They just tore apart my shack. I am the mother of four who survive on child support grants. I decided to come and erect my shack because I was renting a one-room shack for R700 a month,” she said.

Shelley Komna, 24, said, “We are poor and come from a family of seven. The RDP houses are only [big] enough for our parents. We sleep in the lounge and boys occupy backyard shacks.”

Komna said she spent R2,000 to build the shack to live with her two children. “I don’t know where to start now because all my material is gone and I am unemployed.”

The community blamed Ward 31 Councillor Luyolo Nombola (ANC) and PR Councillor Queenie Pink (ANC) for their eviction. The councillors denied this, saying it was the council’s resolution on 30 April to demolish all the new informal settlements.

Pink said that she was hit on the head by a stone. “My vehicle has also been damaged. I had to hide in one of the ship containers. Now they want to burn my house for land that belongs to the municipality,” she said.

Nombola said the land where people had built shacks was earmarked for a new school. “The physical attack on me and my office is politically motivated because of the upcoming local government elections,” Nombola said. “I suffered a minor head injury after being stoned. I will also lay the charges.”

Police spokesperson Colonel Priscilla Naidu said, “At about 9:30am members from the Department of Human Settlements, law enforcement officers, municipality security and SAPS in Algoa Park went to Missionvale to demolish illegal structures.”

Naidu said a case of arson is being investigated for the councillor’s office that was torched in Tromp Road. Three people have been arrested for public violence.

Municipal spokesperson Mthubanzi Mniki confirmed that the City was trying to curb new occupations. He said they began profiling some informal settlements in June and people were warned.

“The community was expected to take responsibility and support the strategy of the City. But unfortunately our communities take advantage of anything and everything. Invasions continue and give the City no choice but to apply law enforcement,” he said.

Mniki said that in Missionvale, occupiers were spotted a week ago and were warned not to continue. “Legal services will appoint a law firm to pursue legal processes. A case has been opened for SAPS to act on any criminal act,” he said.

Previous:  Wild Coast: is there a future in eco-tourism?

50 shacks demolished in Durban without any warning say land occupiers