Concern over plans to cut the crayfish quota

Call for compensation for small-scale fishers 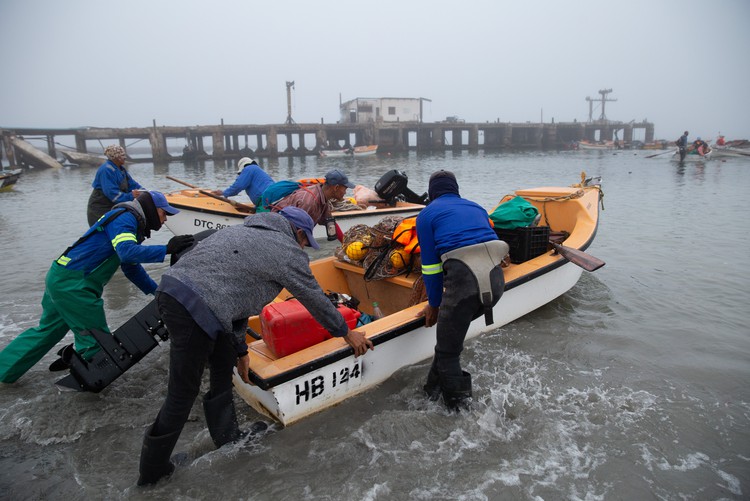 Walter Steenkamp, in front, pushes a boat out with fellow fishers on a misty day in Port Nolloth. Photo: Ashraf Hendricks

The Department of Forestry, Fisheries and the Environment announced on Monday that the total allowable catch (TAC) of crayfish for the 2021-22 season would be increased from 600 to 700 tons, only to be reduced to 550 tons the next year and to 400 tons the year after that.

“Besides the sector being faced with increasing demand from fishing communities and the broader public for access to the resource, illegal fishing and the effects of climate change have also contributed to the vulnerability of the species,” the department said in its announcement.

Naseegh Jaffer, director of Masifundise, which supports small-scale fishing communities, said the phased reduction would be good in the long-term. “If steps aren’t taken now, then the lobster is going to go the perlemoen (abalone) route. It’s going to be almost completely wiped out.”

But Jaffer said that there is concern about small-scale fishers who earn an income mostly from crayfish. He said that the government should come up with a plan for compensation.

“Because it’s the mainstay of people’s income, if the lobster TAC reduces and there’s no other compensation given, then our communities will suffer,” said Jaffer.

Walter Steenkamp, a fisher from Port Nolloth in the Northern Cape, said while his small-scale co-operative was happy about “the little bit of crayfish we got back”, the department should stop cutting the quota so much.

Steenkamp said that he believed the depletion of crayfish stocks in Port Nolloth waters was not as serious as the department’s calculations suggested. He said stocks were very good last year.

According to the report by the Consultative Advisory Forum for Marine Living Resources submitted to the department, on which the quota decision was based, overfishing of crayfish is “threatening the sustainability of the resource and the people who depend on it”.

“You can’t say the small-scale sector is the one that is over-harvesting,” Jaffer said. He said small-scale fishers simply don’t have the boat capacity to overfish.

He was also concerned that the poaching figures used by the forum had not been correctly calculated and that poaching has been overestimated.

The figures in the report are based on data from TRAFFIC, an international body which measures illegal trade of crayfish, and on department compliance data. The TRAFFIC figures suggest that poaching has decreased over the past 12 years, but according to estimates from the department’s compliance data, poaching has increased to about two to three times its previous level over the 12 year period.

The forum used a compromise between these two sets of data to conclude that poaching had been on a downward trend over the past twelve years but had shown an uptick at the end of this period.

The report recommended that a better estimate should be agreed on before the next crayfish season and that the department urgently develop a poaching reduction strategy by then.

Previous:  Is it time to revise our testing, quarantine and isolation protocols?