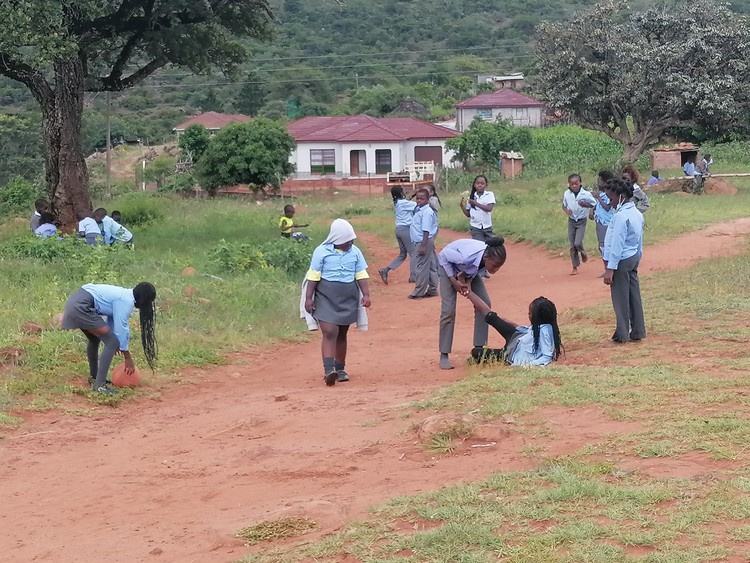 Learners play outside Tshitandani Primary in Vhembe District last week while they waited for teachers to return. The school was meant to merge with another school. Photo: Bernard Chiguvare

An ongoing dispute between parents and the Limpopo education department over the closure of a rural school boiled over last week.

When parents and learners arrived for the start of the school year last Wednesday, teachers had already reported for duty at Tshamulungwi Primary, causing confusion and anger.

Teaching at Tshitandani resumed on Monday after confusion about the school’s closure. The closure was then put on hold after parents complained.

In a letter dated 28 October, the department informed Tshitandani’s principal and school governing body (SGB) that the school would be merged.

Last year it had a total of 97 learners with three teachers, five educator assistants and three general staff members. The department said this was not viable. The department told GroundUp that it had consulted the school and parents prior to the notice in October.

SGB Chairperson Gladys Muofhe said the department has been trying to merge the school with Tshamulungwi since 2018. “We can’t allow our children to travel such long distances. They pass through bushes which is dangerous,” said Muofhe.

Sowell Tjebane, provincial secretary of the South African Democratic Teachers Union, also condemned th closure. “The learners are not being taught. Are these learners going to be compensated for the teaching time lost?”

When Groundup visited the school last week, learners clad in blue and grey uniforms were playing outside. Several parents were also waiting at the school to get an update on when teachers would return.

Tidimalo Chuene, spokesperson for the department, said they are taking the concerns raised by parents seriously. The department has applied for scholar transport for learners to travel to Tshamulungwi Primary.

But other staff and general workers at Tshitandani fear they will be unemployed once the school is closed permanently.

“If the school is merged that would mean I no longer have a job. This is my only means of putting food on the table for me and my child,” said Tsumbedzo Matahela, one of the general workers.

Next:  Court orders compensation for miner with hearing loss

Previous:  Memorial held for Dumisani Joxo who was killed, allegedly by a Cape Town officer