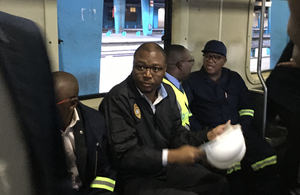 The administrator appointed to turn around the Passenger Rail Agency of South Africa (PRASA) acted “high handedly” in trying to dismiss its chief procurement officer, a court has found.

Johannesburg Labour Court Judge Connie Prinsloo, who presided over the urgent application launched by senior executive Keabetswe “Kea” Mpane, cautioned administrator Bongi Mpondo not to take the law into his own hands.

Mpondo was appointed by Minister of Transport Fikile Mbalula in December last year and given 12 months to fix PRASA’s problems.

His appointment is being challenged in the Western Cape High Court by #UniteBehind - a coalition of social justice organisations and movements mobilised against corruption. That matter has been heard. But no ruling has been handed down.

Mpane was employed on a five-year contract from October 2019.

Last month, Mpondo issued her with a notice to respond to accusations of poor performance and state why her contact should not be terminated as a result of her “unacceptable performance which was way below and short of what was expected by an employee in her position”. She went to the Labour Court to seek an interdict stopping him from firing her.

In her ruling this week, Judge Prinsloo said Mpane’s contract contained a clause which provided for the termination of her employment. But the contract, and other processes governing her employment, laid down the processes which had to be followed.

In her affidavit, Mpane said Mpondo had first put his concerns in writing at the end of March. He had then placed her on probation until the end of July, stating that he would monitor her.

At the end of April, she had furnished him with draft performance targets. A proposed meeting to discuss them had never taken place. She had been “shocked” when she was issued with the letter.

Mpondo, who opposed the application, said Mpane had not been subjected to any disciplinary action.

Ruling that his behaviour was a breach of contract, the judge said the disciplinary code and performance management policies formed part of Mpane’s contract and there should have been a fair process. She said Mpondo had displayed “a wholesale disregard for the contractual terms which are binding. The policies are an internal safeguard against an arbitrary, capricious or unprocedural dismissal.”

“He acted in a high-handed manner when he adopted his own version of what he regarded to be a proper process.”

“Let it be clear. PRASA is entitled to terminate employment, however it is not entitled to do so without following the process provided for in a policy that the parties have contractually agreed to,” the judge said.

Learners are only attending this Uitenhage school once a week